In our quest to chronicle the extent of the unprecedented mania and speculative excesses in financial markets (also crypto-currencies, art, real estate, etc.) we focus today on the “high yield” (junk) bond market.  This post complements yesterday’s Curmudgeon on the super-hot market for IPOs.

During the 1st quarter of 2021, U.S. companies raised a record $140 billion in the junk bond market, according to data from Refinitiv. That beat the previous record set during the 2nd quarter last year when companies scrambled to issue debt in a bid to raise cash during the start of the coronavirus pandemic. The three biggest issuance quarters in history have been set in the past year with the biggest of all in this year’s 1st quarter.

Indeed, the Fed's extraordinary intervention in the credit markets last Spring (including buying junk bond ETFs) enabled investment-grade and non-investment-grade companies to issue $1.9 trillion and $442 billion of debt, respectively, in 2020. They already raised a fifth and a third of these amounts so far this year, according to data compiled by Bloomberg.

And there’s a lot of corporate debt outstanding!  Average total debt, weighted by market capitalization among large and small companies that make up the Russell 3000 Index, probably is a record $47 billion, or $4 billion more than a year ago and $16 billion greater than it was at the end of 2015, according to the latest corporate filings compiled by Bloomberg.

Let’s take a closer at high yield debt and high yield credit spreads in this article.

Investment grade bonds (Barclays Global Aggregate Index) and 30-year Treasuries experienced significant declines during the 1st quarter of 2021 of -4.5% and -15.66%, respectively.  It was the worst performance for the 30-year T-bond on record (data going back to 1976).  And that’s despite the Fed buying $80 billion of Treasuries each month!  The junk bond market looked the other way as total returns were positive in the quarter.

It’s been a flight to the junkiest of junk!  What me worry? 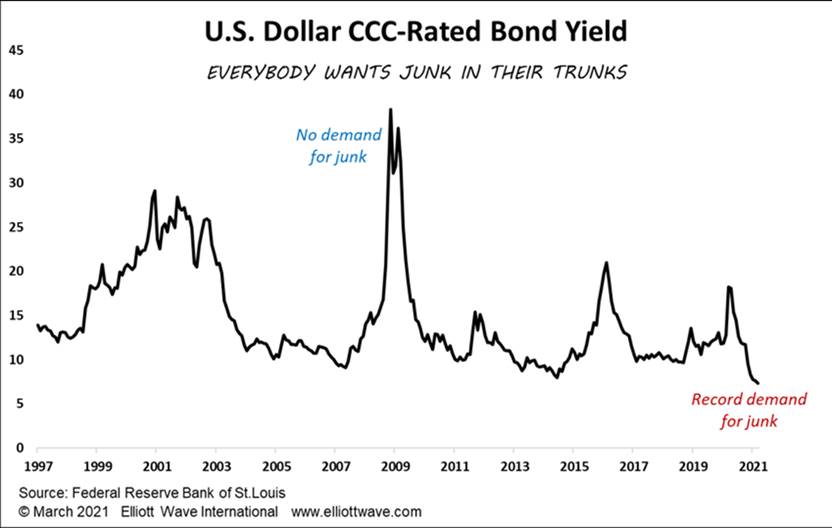 ·       American Airlines Group Inc. sold a total $6.5 billion of bonds in March at yields 20% below the rates prevailing six months earlier, according to data compiled by Bloomberg.

·       Carnival Corp, the Miami-based owner and operator of cruise ships to global vacation destinations, sold $3.5 billion of bonds in February at an initial yield of 5.9% that subsequently declined to 5.2% as investors snapped up the offering. Similar securities sold by the company earlier last year yielded 6.8%.

·       Cetera Financial Group Inc. is expected to complete a $400 million bond offering on Thursday to help finance its acquisition of a Voya Financial Inc. financial planning business. The deal is rated Caa2 by Moody’s Investors Service and an equivalent CCC by S&P Global Ratings.

·       Michaels Cos. launched a $2.3 billion junk bond deal to fund its buyout by Apollo Global Management, with investor calls through April 8.

No Fear (or Risk) in High Yield Credit Spreads:

As one would expect from the junk bond out performance noted above, “high yield” credit spreads [over the equivalent maturity Treasury bond] declined over the last three months to historic lows, as per this chart:

Today, Moody’s John Lonski forecast that High-Yield Bond credit spreads would decline to under 300 bps by the end of the week.  That’s from around 684 bps one year ago!

The rise was even greater from the July 1, 2007 low of 242 bps till the 2009 great recession peak around 1860 bps, as default percentages rose to over 13%. For more on the latter junk bond meltdown please refer to this academic paper.  For a more generic reference, check out The History of High-Yield Bond Meltdowns.

The riskiest entities are being rewarded with 52% more credit upgrades than rating downgrades, as demand for exchange-traded funds with high-yield junk bonds climbs to new highs. In today’s credit markets, anyone raising money can do so on the easiest terms of a lifetime.

Evidently, there are widespread expectations of very rapid profit growth and low default risk which have, in turn, narrowed corporate bond yield spreads.

Confidence in the Fed’s continued suppression of Treasury bond yields has also been a factor.

Earnings Forecasts Rise along with Junk Bond and Stock Prices:

The JP Morgan Forecast Revision Index -- a gauge of how much economic forecasts change in a quarter -- posted its biggest upward move in history this past quarter as economists raced to upgrade their economic outlooks.

“Since last June, 10-year Treasury yields have increased by 100 basis points (from 0.7% to 1.7%), leading many investors to question the sustainability of these elevated stock multiples (P/E ratios),” Credit Suisse strategist Jonathan Golub wrote in a note last week to clients. “With (P/E) multiples stable, the market’s entire advance can be explained by improving earnings.”

Investor appetite for the riskier junk bonds is attributed partly to improved S&P ratings for 178 “high-yield” corporate debt securities compared to 117 downgrades. Moody’s also issued about 2.3 upgrades for each downgrade, its highest ratio in the past decade.

Risk ON has never been greater.  In past columns, we’ve shown a voracious appetite for IPOs (many of which have no earnings), penny stocks & margin debt, SPACs, bulletin board inspired stocks (GameStop and AMC), and high flying mega tech stocks.

Of course, the biggest speculation of all is in Bitcoin, but Victor and I don’t comment on it because we believe it has no intrinsic value. Yet it is the poster child for the all-asset financial mania/ mega bubble that’s existed for years.

In this piece we’ve discussed the mania in high yield bonds of the lowest quality and narrowing credit spreads. Readers should ask themselves if it is worth the credit risk to buy a “high yield” bond paying under 4%, especially with Treasury and higher grade bond yields rising.

“You tend to see these levels (of low junk bond yields and narrow credit spreads) towards the end of a credit cycle, and we’re clearly there,” said Guy LeBas, chief fixed income strategist, Janney Montgomery Scott LLC. “We’re much closer to the end than we are to the beginning.”

“The emergence of more transmissible variants of the coronavirus is a reminder that even with vaccines in hand, the evolving virus could have more unhappy surprises for the world economy (and financial markets). If forecasts don’t pan out, there’s lots of room for junk bonds to sell off. Companies that have borrowed heavily to stay afloat during the pandemic could be dragged down by that debt,”  excerpt of an article by Jack Pitcher, Carolina Gonzalez, and Paula Seligson of Bloomberg.

Stay calm, be well, hope for the best, and till next time…...