Tech Companies Dominate the Stock Market but For How Long?

The Wall Street Journal (on-line edition-subscription required) said on Saturday that technology companies are set to end the year with their greatest share of the stock market ever, eclipsing a dot-com era peak in the latest illustration of their growing influence on global consumers and economy.

Tech stocks now account for nearly 40% of the S&P 500, on pace to eclipse a record of 37% from 1999, according to a Dow Jones Market Data analysis of annual market-value data going back 30 years. And that does NOT include Amazon [1.] which is in the consumer- discretionary sector. If Amazon, with a market value around $1.6 trillion, was reclassified as a tech stock, it would make the tech sector’s dominance over markets even bigger, the Journal article stated.

Of course, Amazon also makes and sells consumer electronic products like e-Readers, tablet computers, intelligent speakers/displays, Fire TV sticks and other gadgets (owned by the Curmudgeon and many, many others).  They have also embedded Internet TV and “Alexa” into many television sets (like the large screen Toshiba TV the Curmudgeon just bought).

By the way, the voice recognition capability of “Alexa”, especially on the Echo device, has deeply deteriorated over the last four or five years.  And what’s that you heard about Machine Learning/Deep Learning?

In an August 2020 Curmudgeon post, we described how six big tech stocks distort market indexes.  It’s only gotten worse since then.

In this article, we analyze the influence of big tech on the economy, markets and are everyday lives.  We then reflect back 15 and 20 years to see what happened to the largest capitalization stocks of those eras.

The tech companies’ dominance of the stock market and economy is propelled by their unprecedented reach into our everyday lives, shaping how we work, communicate, shop, and spend leisure time. That has only deepened during the pandemic induced lockdowns, as people shop more frequently on Amazon, click on a Google ad, check Facebook for social media stories, buy an iPhone or subscribe to new services from Apple (especially Apple TV+).  In the corporate world, more companies are flocking to the cloud for computing and storage services from Amazon AWS, Microsoft Azure, and Google Cloud.  As a direct result, the tech giants receive a greater share of spending in the economy and earn ever larger profits.

“We’ve had a mandated digital lifestyle,” said Alison Porter, a portfolio manager focused on the tech sector at Janus Henderson Investors. She remains confident in the biggest tech companies because of their reliable growth and prominence as people stay home much more due to pandemic induced restrictions.

While data show the tech giants employ fewer workers than many previous market leaders, they do invest heavily in their businesses and allow other firms and consumers to buy and sell goods and services more efficiently. Amazon is probably the best example of that. For years, it plowed back earnings into investment into its core businesses (e-Retailing and Cloud Computing).

Howard Marks, co-founder of investment firm Oaktree Capital Group LLC, said in a recent memo to clients that measures of how expensive tech stocks are relative to current profits could actually understate the potential of these companies because they spend so much to drive their rapid growth.

Analysts estimate the tech sector’s share of S&P 500 corporate profits could reach about 36% this year, FactSet data show. The information-technology sector has a price/earnings ratio of 28 based on the group’s profits from the past year, compared with a ratio of 24 for the S&P 500. Communication-services firms trade at 25 times earnings, while Apple, Microsoft Corp, Facebook Inc., and Alphabet (Google) have valuations in the mid-30s. Netflix’s ratio is about 90, while Amazon’s is roughly 130.

Apple (AAPL) is the world’s largest tech stock.  Earlier this year, it became the first U.S. company to hit a $2 trillion market capitalization, accounts for more than 7% of the index on its own- down a tick from the 8% of the S&P 500 in September.  Its market cap is larger than the cumulative total of the stocks in the Russell 2000 index.

“They (mega cap tech stocks) have received an added boost over the last 10 years because the broad economic backdrop has been lackluster,” said David Lebovitz, a global market strategist at J.P. Morgan Asset Management. That’s quite an understatement as the economic recovery that started in June 2009 was the worst in all of U.S. history!

Because the S&P 500 is weighted by a company’s market value, the biggest internet firms have overshadowed declines in several sectors this year. In another illustration of the group’s strength during the pandemic, the S&P is outpacing a version of the index that gives every stock an equal weighting by nearly 10 percentage points this year, a gap that would be the highest since the late 1990s.

“The longer this backdrop continues, the further they’re going to pull away from the pack,” said Amanda Agati, chief investment strategist at PNC Financial Services Group, which is favoring companies more tied to remote work and learning recently like technology, health-care and consumer-staples firms.

Amazon and other large internet companies have come under increasing regulatory scrutiny in recent weeks, with a Democratic-led House of Representatives panel recently finding that Congress should consider forcing the tech giants to separate their dominant online platforms from other business lines.  The Democratic report found that the four tech companies -Facebook, Amazon, Google, and Apple enjoy monopoly power in their respective domains. You can read the full 450 page report here.

Senator Elizabeth Warren seemed to have initiated the call to break up big tech:

“Today’s big tech companies have too much power—too much power over our economy, our society, and our democracy.” – Elizabeth Warren

The WSJ article says that few analysts expect the biggest tech firms to soon be broken up.  While regulatory actions are often slow to play out, many investors think regulation could be another source of volatility in the weeks ahead.

Ultra-low interest rates have also given a big boost to mega cap tech stocks, as there is no competition from bonds, CDs, or other fixed income investments.  Indeed, a major assumption that momentum traders have been relying on to keep stock market multiples at a “permanently high plateau” (Irving Fisher quote just before the 1929 stock market crash) is for interest rates to stay near current levels for the foreseeable future.

As noted many times in previous Curmudgeon posts, we think a U.S. dollar crash and/or accelerating inflation could result in sharply higher interest rates, independent of the Fed’s QE programs.

John Hussman says: “Believe what you wish about the Fed’s ability to keep stock prices elevated forever. I expect that we’ll do just fine if that’s the case. I just think it’s a terrible idea to rely on the idea of a “permanently high plateau.” 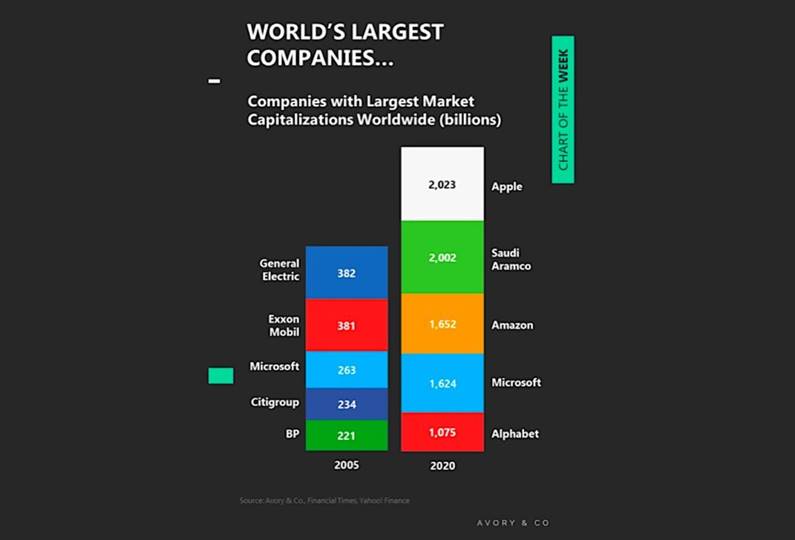 Note that four of the five top market cap companies have fallen off the mega cap radar screen (especially GE).  Only Microsoft, with its reinvention as a cloud computing (Azure) leader is currently in the top five.

In 2005, many of the technologies we use today were either in their infancy or not yet invented.  For example, there was no iPhone (or 4G) or cloud computing, while eCommerce was just starting to ramp up.

According to iWeblists. here are the largest capitalization U.S. tech stocks (we included Amazon) in $ billions as of October 12, 2020:

Note.  We did not include #21 Netflix which, in our opinion, is a content creation and distribution company, much like Warner Brothers.  In fact, Amazon AWS hosts almost all computing and storage for Netflix.

A Study in Market Cap over 20+ Years:

On March 10, 2000, Sun Microsystems (one of the “4 horseman of the Internet” in the late 1990s) had a market cap of $164.5 billion according to Reuters.  It lost 98% of its stock market value in 2009, was sold to Oracle on January 27, 2010 and subsequently shut down after almost all employees were laid off.  But at least if you held SUN stock prior to its buyout by Oracle, you would’ve received cash when the deal closed.

So many times in the past 53 years, the Curmudgeon has heard seemingly endless talk you could buy certain types of stocks and hold them forever, as their earnings would always grow and they would maintain or gain market share.  Here are just a few:

·       Small cap stocks thoroughly outperformed large caps from 1975 to 1986 with the assumption that they were nimbler and therefore would grow earnings faster than their big cap brothers. However, a lot of that outperformance was due to U.S. dollar strength that continued till the Plaza Accords of September 22, 1985.

·       In the late 1970s and early 1980s, during a period of accelerating inflation, energy/natural resource stocks dominated the pack.  Inflation was perceived to continue in double digits for the foreseeable future.

·       From around 1996 to 2000, Internet stocks, tech companies and companies that started to sell products on the Internet boomed in price.  That all ended in the DOT COM crash which was followed by the fiber optic bust/meltdown.

So why not just buy and hold the large cap tech stocks or the NASDAQ 100 index (QQQ ETF) they dominate?  Well, that would’ve worked magnificently since March 2009!  So much for 20-20 hindsight!

However, the sun also sets and what was the “in-thing” today is out of favor tomorrow. The big tech companies could face severe monopoly like restrictions or could be broken up into smaller pieces, such that they would no longer have the same scale and power they have today.

We have thoughts on the outlook for all of the big tech names, but that is something for another day and possibly a consulting job.

Be well, stay safe and calm, good luck and till next time…….