Last December, we opined that IPOs were in bubble territory and there were signs of financial euphoria everywhere you looked.  Well, it has only gotten more extreme since then as we describe below. But first let’s look at flows into and out of various types of equities.

Bank of America – The Flow Show:

If IPOs from Special Purpose Acquisition Companies (SPACs) are included, accounting for about a whopping 75% of all public offerings in the quarter, the total number increases to 398. The 298 SPACs raised $87 billion. In fact, at the current pace, there could be more than 1,000 SPAC IPOs this year. That's more than double the 486 IPOs in 1999, at the peak of the dot-com mania. On average, the number of IPOs in a typical year is about 200.

"While end-of-quarter volatility threatens to dampen activity, record filings have kept the pipeline full, and several high-profile deals are set for the second quarter," the Renaissance report stated.

There are currently some 89 IPO registrations on file, seeking to raise $12 billion.  However, Renaissance estimates there are an additional 250 companies that are IPO-ready. Some of them, perhaps about 25%, are believed to have filed confidentiality, as allowed by the SEC. These are companies with revenue of less than $1 billion that will publicly file when ready.

Meanwhile, there's a bundle of "unicorn" companies expected to go public sometime this year. These are companies with valuations above $1 billion.

They include Squarespace, Robinhood, Marqeta, Oatly and Instacart. Others include Flipkart, Grab, AppLovin and KnowBe4. CoinBase is planning a direct listing with a value near $50 billion.

In the first quarter, the largest IPO by deal size was Coupang at $4.5 billion, followed by dating app Bumble at $2.15 billion, then solar company Shoals Technologies (SHLS), at $1.9 billion.

Not included on this list is online gaming platform is Roblox (RBLX), which completed a direct listing and began trading at a $42 billion market cap. The Roblox IPO was the first direct listing this year.

Do you sincerely think any of these new age companies deserve their current valuations?

I believe we are in the late mania stage of a gigantic stock market bubble.  In that phase:

·       Enthusiasm spreads like a virus and causes rampant speculation.

Recently, there’s been a lot of talk about the post-COVID economy and markets being a period like the Roaring 20’s.  What do you think about that and where do you think the U.S. stock market is today in the Four Stages of a Bubble chart below? 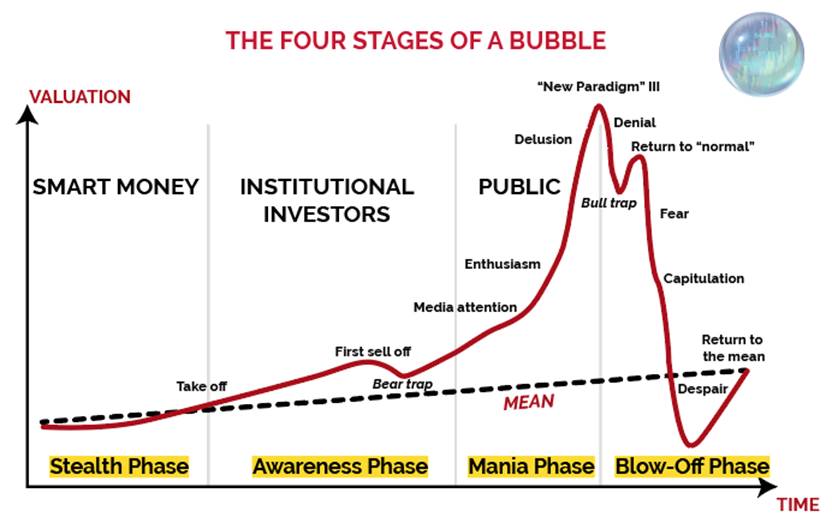 “The long, long bull market since 2009 has finally matured into a fully-fledged epic bubble. Featuring extreme overvaluation, explosive price increases, frenzied issuance, and hysterically speculative investor behavior, I believe this event will be recorded as one of the great bubbles of financial history…”

“The one reality that you can never change is that a higher-priced asset will produce a lower return than a lower-priced asset. You can’t have your cake and eat it. You can enjoy it now, or you can enjoy it steadily in the distant future, but not both – and the price we pay for having this market go higher and higher is a lower 10-year return from the peak.”

Excerpts from, “Waiting for the Last Dance: the hazards of asset allocation in a late-stage major bubble,” published by GMO.

Stay calm, be well, life will get better, and till next time…...