Who Controls the United States of America?

Most people would answer “the leadership of the Democratic and Republican Parties.”  Let’s examine that belief and then see who really is in control of the Unites States of America.  We’ll then move on to discuss related topics, including examples of overwhelming speculation and acceptance of unprecedented risks in financial markets.

Most Congressional representatives listen to their leadership. If not, they don’t get to be the head of important committees, get campaign financing, or political endorsements and so may not get re-elected.

In reality, political parties tend to vote in unison and act more like gangs than individual representatives for their districts, states and for the people that voted them into power.

Corporations and industry groups, labor unions, single-issue organizations, collectively spend billions of dollars each year to gain access to elected officials and decision-makers in government.  Their motive is to influence the thinking and actions of politicians.  That happens because the political and economic power that creates company profits and causes winners and losers is in large part determined by Congressional legislation.

The intent of most of those large corporate contributions was to erode competition and strengthen monopoly power [1.].

Note 1.  Historically, competition was the enemy of both Robber Barons (prominent U.S. businessmen in the late 19th century who had become rich through ruthless and unscrupulous business practices) and Communist Dictators (like Fidel Castro who condemned competition).

Personal note:  I receive about 10 solicitations per day from the GOP through emails and texts asking for money.  One never knows what they will do with the money requested.  You can’t write back and ask as the email address is cryptic, e.g., “info@itsourgreatamerica.com.”  Yet the name on that email stated it was from House Rep Republican Jim Jordan, who does not know me at all, and I have never given him a penny.

It’s all a scam to get money for a cause you don’t know about and for a party that is not for the average American citizen (Mitch McConnell is certainly proof of that).

I can make a safe prediction: The Republican Party will become a Trump party in the future.

I submit that that the actual political and economic system in the U.S. today is corporatism (also called corporativism). The control of the 535 members of Congress, members of the Supreme Court and President are, in reality, the 500 “largest revenue” producing U.S. based multinational corporations, which are not the same as the companies in the S&P 500).  For reference, the list of the largest U.S. corporations by revenue is here.

Walmart leads the list of corporate revenue earners with $559 billion.  I wonder why they were deemed an “essential” business that was permitted to remain open during the shutdown?

–>Thereby, those 500 large companies had revenue equivalent to 68.8% of nominal GDP and 78.2% of real GDP! Meanwhile, corporate tax revenues are decreasing:

It’s much worse than that, according to NYU Marketing Professor Scott Galloway, who was a guest panelist on Mahr’s March 12th program.

“There are now six companies that are worth more than the bottom 372 in the S&P 500 (Tweet correction to transcript).  Amazon, since March, has added more market capitalization than all of European retail (sales). We have effectively four companies (Amazon, Apple, Alphabet/Google, and Facebook) that are so dominant that we’ve been overrun.  There's more full-time lobbyists working in Washington for Amazon than there are U.S. Senators.  There are more people working in PR and marketing communications at Facebook manicuring Sheryl’s image than there are journalists at the Washington Post. We are so beyond any sense of balance in our economy. The (entire) ecosystem is out of control. We absolutely need to break these companies up” (The Curmudgeon couldn’t agree more with that!)

The Rich Get Richer and Pay More Taxes Too:

For reference, 143.3 million taxpayers reported adjusted gross income of $10.9 trillion and paid $1.6 trillion in individual income taxes in 2017 (the latest tax year available). Let’s compare that to the top 1 percent of taxpayers:

·       According to the Tax Foundation, the top 1 percent of U.S. taxpayers accounted for more income taxes paid than the bottom 90 percent combined!

Many of the top 1 percent are CEOs or executives of the 500 large companies.  Through their companies, they controlled about 78% of real GDP in 2020 and individually earned 32% more money than 143.3 million people earned in 2017!

Prof. Galloway worries that “our government has been co-opted by the wealthy and is focused on protecting the previous generation of winners, even if it means reducing future generations’ ability to win.” He asks, “aren’t we borrowing against our children’s prosperity to protect the wealth of the top ten — if not one — percent?”

What do you think after looking at the chart below? 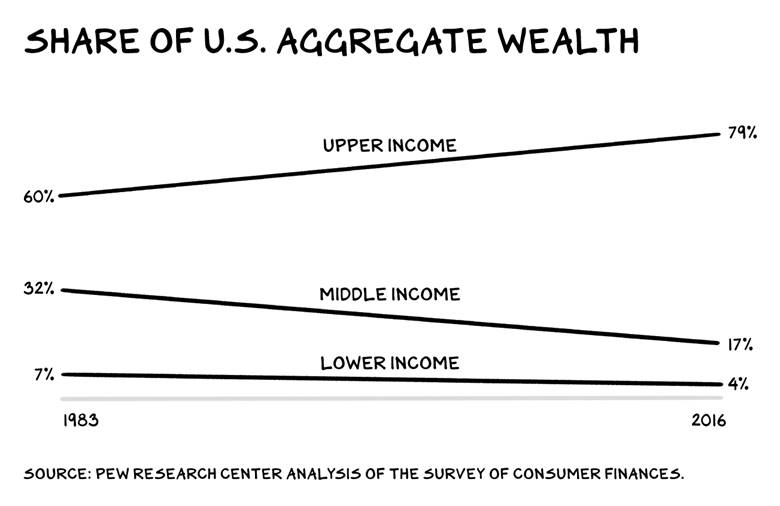 The markets are rampant with speculation.  Bitcoin, margin debt, and penny stock volumes are all at record highs and increasing at exponential rates.

In February, margin debt jumped by another $15 billion to $813 billion, according to FINRA. Over the past four months, margin debt has soared by $154 billion, a historic surge to historic highs. Compared to February last year, margin debt has skyrocketed by $269 billion, or by nearly 50%, for another WTF sign that the all-asset mania has gone berserk: 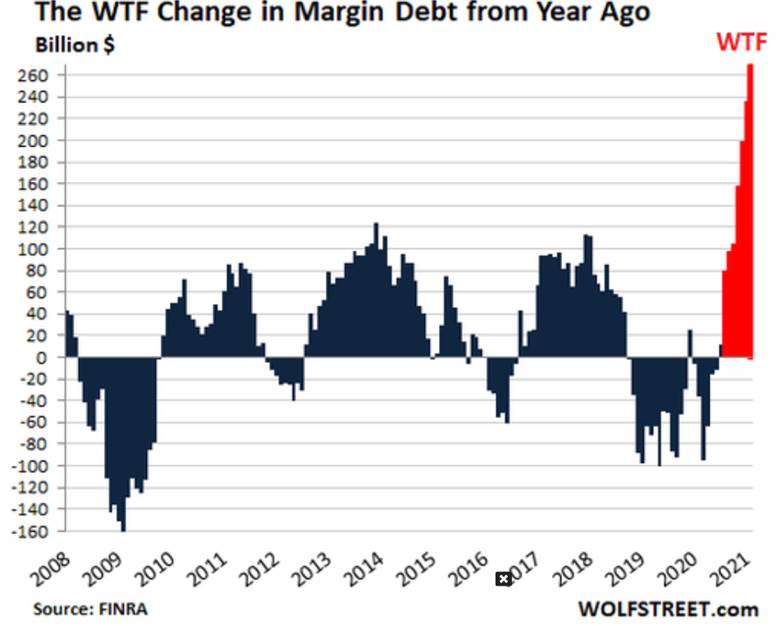 Meanwhile, total Penny Stock Dollar Volume hit $72 billion this past January, the highest level since the first three months of 2000, when the dot-com mania peaked. Other than those three months, when penny-stock dollar volume averaged a whopping $155 billion, the value of shares traded in January 2021 was the highest. This suggests a nearly unprecedented acceptance of risk. The chart below shows the average daily trading volume in penny stocks. Does it look reasonable to you?

President Biden is calling Vladimir Putin “a killer” in response to an interview question. That may be true, but Russia has more nuclear warheads than any other nation, including the U.S. So, Biden’s provocation was not at all intelligent diplomatically, to say the least!  The Kremlin described the U.S. president’s remark as “very bad,” and recalled its ambassador to “analyze what needs to be done” about the two countries’ relations.

I believe China, Russia, and perhaps Iran will challenge Biden’s authority as they see him as a weak figurehead.

That is a new, unrecognized risk for financial markets (especially so called “risk assets”), which are at historic valuations, long in the tooth (aged), and characterized by unprecedented wild speculation.

Multinational corporations can buy anyone with a pittance of gross revenue. THAT IS WHO CONTROLS AMERICA TODAY!

“There is no America. There is no democracy. There is only IBM and ITT and AT&T and DuPont, Dow, Union Carbide, and Exxon. Those are the nations of the world today.”

Many of those companies (e.g., Alphabet/Google) significantly contributed to Joe Biden’s presidential campaign.  Biden is for open borders and no tariffs.

The biggest media conglomerates in America are AT&T, Comcast, Walt Disney, National Amusements (includes Viacom Inc. and CBS), News Corp and Fox Corporation (both owned in part by the Murdoch’s).  Those six mainstream media companies believe it is far more profitable to sell and influence public opinion rather than report the news!

–>You don’t get the news from those sources; you get pure propaganda.

Conversely, you get totally honest news, and more facts from the Curmudgeon (and other unbiased) blog posts than the mainstream media.  That’s because the authors don’t deal in other conflicting businesses like the big six media companies do.

When asked why he robbed banks, Willie Sutton said, “because that’s where the money is.”  The same principle applies to politics.

The corporate and political goals are best exemplified by these two quotes:

“All over the place, from the popular culture to the propaganda system, there is constant pressure to make people feel that they are helpless, that the only role they can have is to ratify decisions and to consume.” Noam Chomsky

Stay calm, be well, think positive, and till next time…