Airbnb CEO Brian Chesky was at a loss for words in a Bloomberg TV appearance when he was told of the company’s opening share price.  Perhaps that’s because Airbnb’s annual revenue growth slowed from 80% during 2016 to 31% during 2019. Bookings tanked early in the pandemic, and revenue in the first nine months of 2020 was down 32% from the year-earlier period.

Valuations of recent IPOs are at their highest levels since the dot-com bubble, relative to the companies’ revenue, sparking concerns among investors about the level of froth in the market.

In this post, we examine signs of speculative excess that have ALWAYS preceded a MAJOR stock market crash (think the DOT COM bubble bursting).  Next is our assessment of the frothy IPO market with lots of statistics to prove our point. We conclude with a note about zombie companies and a few closing quotes on the IPOs.

Signs of financial euphoria are everywhere.  Here are just a few:

·       Exchange-traded funds (ETFs) are on pace to add $466 billion, the biggest year of inflows ever (see Chart 2. below). At the current pace there will be more assets in passive equity funds than active by 2022.

·       B of A Research’s Bull & Bear Indicator jumped to 5.8 (8=sell signal) while inflows triggered a sell signal for Emerging Market equities.

·       Wall Street brokerage firms/investment banks are also bullish:  B of A Research’s Sell-Side Indicator is the closest to a sell signal since 2007.

Source:  B of A Research

Speculators have valued newly public (loosely defined) tech companies at a median of 23.9 times the revenue (NOT earnings) reported in the 12 months before going public, according to University of Florida Business school Professor Jay Ritter, who tracks initial public offerings. That measure is by far the highest of the past two decades.  The valuations imply investors are counting on years of continued rapid growth by these companies, hoping some will dominate their industries and churn out large profits, he said.

The result has been that the market capitalizations of many money-losing high-flying IPOs are now greater than giant, highly profitable stalwarts of corporate America. For example, Airbnb is worth more than Marriott International Inc., Hilton Worldwide Holdings Inc. and Hyatt Hotels Corp. combined, by market capitalization. It’s worth about the same as online travel giant Booking Holdings Inc., a slower-growth company that had more than double Airbnb’s revenue in the 12 months through September and had a $1.3 billion profit. DoorDash is worth nearly double fast-food operator Yum Brands Inc., the owner of Pizza Hut, Taco Bell, and KFC.

Ritter commented in a Bloomberg article that “80% of the companies that went public this year were unprofitable in the 12 months prior to their IPO.”  Yet the Renaissance IPO ETF (IPO) is up 111.52% year to date (YTD). This ETF has 48 holdings with over 10% in both Uber Technologies (UBER) and Moderna (MRNA). It has $670 million in assets with a somewhat-high expense ratio of 0.60%. 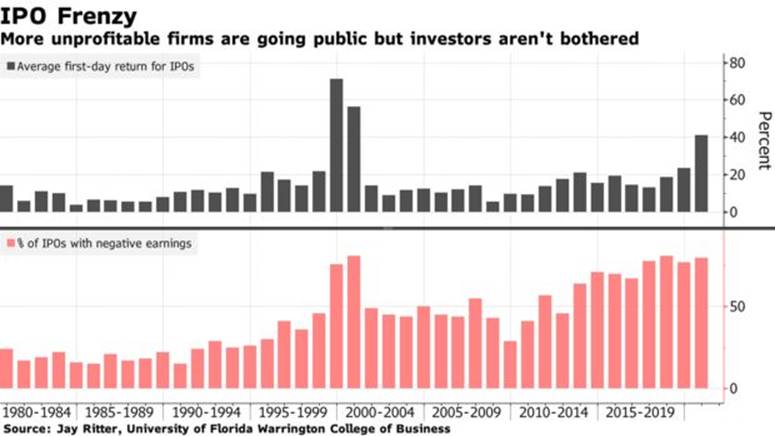 “I have a great deal of difficulty understanding the valuations of some of these companies,” Prof. Ritter said. The difference in enthusiasm for the unprofitable young companies and old corporate giants with consistent profits is “night and day,” Ritter added.

There’s more IPO madness: Software company Snowflake Inc., which went public in September, is worth more than 200 times the $489 million in revenue it made in the 12 months through October. Data-analysis firm Palantir Technologies Inc., which went public in September at a roughly $21 billion valuation, is now worth $50 billion, or 50 times its revenue.

What’s going on here?  For most of the 2010s, the median multiple for a tech company after its first day of trading hovered around 6 times its revenue in the prior 12 months. The same measurement for stocks on the Nasdaq Composite Index is 4.3, according to FactSet.

Old pros would expect the new supply of stock issued in the form of IPOs and secondary offerings to be a negative headwind for equities this week. Not in a mania.  This week, the market has absorbed the new supply in a manner that hasn't deterred the bullish trend.  For example, Tesla (TSLA) was +1.8% this week despite selling $5 billion of common stock!

We’re stumped.  With so many Americans suffering financially due to the pandemic lockdowns and with the real U.S. economy not expected to recover till 2022 (B of A Research says that it will not reach the measly 1.7% trend GDP growth until 2022 or beyond), how could such exuberant speculation be occurring?

ShadowStats’ John Williams writes, “Severe systemic structural damage from the shutdown will forestall meaningful economic rebound into 2022 or beyond, irrespective of coronavirus treatments and vaccines.”

Indeed, the economic data has weakened recently with the second surge of the virus and new lockdown orders (especially in California). The number of Americans filing for first-time jobless claims surged to 835,000 for the week ended Dec. 5th, up from 716,000 the week before.  The next U.S. economic number to watch is Industrial Production, to be reported on Dec. 16th.

Meanwhile, coronavirus related government stimulus payments have resulted in 16% of OECD companies becoming "zombies" (income doesn't cover debt payments), which means that even in an economic rebound, revenues go to balance sheet repair instead of capex. The only cure for zombies is significantly more aggregate demand, but that won’t happen with stay at home health orders in effect.

“The valuations are better in the public markets than private markets, which was not the case in ’19 or ’18,” Rajeev Misra, who runs SoftBank Group Corp.’s $100 billion Vision Fund, said in a conversation with an analyst at New Street Research LLP last month. “The public markets are very buoyant.”  [SoftBank was by far the largest investor in startups in the past few years, flooding companies like WeWork, Uber and DoorDash with cash.]

“A lot of entrepreneurs now realize it’s a very receptive and attractive public market,” said Rich Wong, a partner at venture-capital firm Accel, an early investor in Slack Technologies Inc. and Facebook Inc. If the rally stays apace, 2021 “will definitely be the most active IPO market in the last 20 years,” he said.

“There is no doubt that the emergence of a much larger cohort of retail investors-slash-traders are moving markets.  There seems to be an entire subculture of people that sort of follow the same things, talk to each other on social media and drive enthusiasm for individual issues. And sometimes it makes no fundamental sense to anybody, said Art Hogan, chief market strategist at National Securities Corp.

“This doesn’t end well historically, but for the time being it’s the nature of the beast. But it didn’t take long after 2000 to see that cohort of day trader types fade into the sunset, not really come back until really March and April of this year when things exploded again,” Hogan added.

Good health, stay calm and safe, persevere under lockdowns and till next time….