One of the most perplexing financial questions this year is about the precious metals: “Why have Gold and Silver performed so poorly?”

Gold was always considered as a hedge against inflation, market volatility and geopolitical instability which should’ve enhanced its appeal in 2022 as a “safe haven.”  Yet despite stubbornly high inflation (>8% in the U.S.; >10% in the UK) and Russia’s war in Ukraine, Gold/Silver and mining shares have been horrible investments this year.

Let’s first look at the rise of the U.S. dollar (DXY) as the main culprit for the abysmal performance of the precious metals in 2022.  Then we’ll examine other important currency related issues and close with a question about totalitarianism.

Reasons for a Strong U.S. Dollar:

The super strong U.S. dollar -highest in over 20 years- is mainly why Gold and Silver have performed horribly in 2022 (see 2022 YTD Performance Comparison below).

Gold and Silver, which are priced in dollars, are inversely correlated to the DXY.  We have addressed this issue earlier this year in “The U.S. Dollar’s Strength Explained,” but let’s re-examine the case now.

The U.S. dollar index has hit new 20+ year highs because its component currencies are all hitting several multi-decade new lows! The dollar going up is the reverse of the currencies in the DXY [1.] going down. The interest rate differentials between the U.S. and the countries in the dollar index are very high and thereby contribute to the strong U.S. dollar.

Note 1. The Euro is 57.6% of the DXY, the Japanese Yen 13.6%, and the British Pound 11.9%.  Therefore, 83.1% of the currencies in the dollar index are in deep declines making new multi-decade lows which causes the DXY to be at multi-decade highs.

Jeff Snider, Chief Strategist for Atlas Financial and co-host of the popular Eurodollar University podcast, says there is a U.S. dollar shortage.  I can’t understand this so can’t comment. But it is being used as justification for a strong dollar by some very knowledgeable people.

Other reasons for the strong dollar are Russia’s war in Ukraine, the political safety of the U.S. due to its military, and that the dollar is still the world’s reserve currency (although this is in the process of changing in my opinion).

-->Therefore, capital is flowing into the U.S. dollar due its “safe haven” status and higher real interest rates in the U.S.  Rising (real and nominal) bond yields and strength in the U.S. dollar have greatly diminished Gold’s appeal as an investment.

When the dollar declines Gold and Silver will be much higher in our opinion.

The above subhead was stated by the late and great Dow Theorist Richard Russell in the Feb 22, 2008 issue of his Dow Theory Letters (which the Curmudgeon subscribed to for many years).  Gold’s current price action has been extremely frustrating, if not torturous, for those looking to Gold as an inflation hedge.

In particular, Gold rose strongly from the late 1970s till January 1980 as inflation accelerated above 8%.

In response to a Curmudgeon request, Jason Goepfert of Sundial Capital (we highly recommend readers subscribe to his Sentiment Trader service) provided the table below. It shows the returns for gold after any month in which the CPI Y/Y was 8% or higher.

Since 1976, Gold prices were an average of 27.4% higher a year after CPI was first reported as 8% or higher. Yet it was positive after only 49% of the signals, due to some of the previous gains being extremely high.

Here’s an interesting chart comparing the inverted TIPs yield with the price of Gold in 2022:

Indeed, the Fed’s recent jumbo rate rises (after years of a free money party) and seemingly never-ending hawkish drumbeat have called all assets to plummet in price this year.  We discussed that in detail in last week’s twin posts which you can read here and here.  It’s best illustrated by this cartoon which is just in time for Halloween trick or treat: 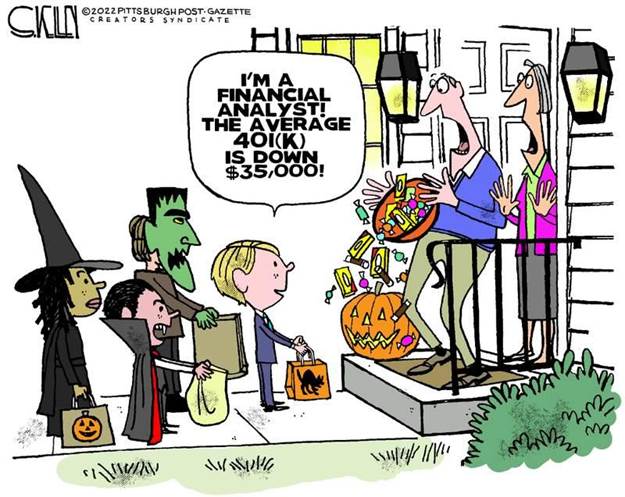 Manipulation of the Gold Price?

We’ve previously discussed manipulation of the Gold market to keep prices down, but let’s now provide additional clarity and color.

JP Morgan was accused of “spoofing” or manipulating the price of gold by putting in massive orders. Then, they quickly pulled the orders before they are executed. Even though the orders weren’t real, they still had a “cause and effect” on the markets.

“Our job was to do whatever it takes to make money,” former trader John Edmonds said in a court case accusing three of his former colleagues of committing systematic fraud. “Everyone at the time did it on the desk and it worked.”

JPMorgan’s former global head of the precious metals trading desk Michael Nowak, precious metal trader Gregg Smith and hedge fund salesman Jeffrey Ruffo have been charged by the Justice Department with racketing and conspiracy charges and are now on trial for the crimes.

Edmonds claimed he learned how to “spoof” trades during his time at JPMorgan where he executed as many as 400 of the fraudulent trades — he added it was “expected” of everyone on the desk.  Prosecutors allege the precious metals desk made as many as 50,000 spoof trades under Nowak’s watch. “I saw people trading for 20 years doing this,” Edmonds said. “How could I not do it?”

Edmonds, who said the fraud was committed between 2008 and 2016, was the first to plead guilty to market manipulation in 2018.

Other investment banks engaged in similar practices. Deutsche Bank, HSBC, and UBS reached agreements with the Commodity Futures Trading Commission (CFTC) in 2018 to settle claims that their traders used spoofing to manipulate precious metals futures prices – paying $30 million, $1.6 million, and $15 million, respectively – in order to avoid admitting wrongdoing and the possibility of a prolonged court battle.

Has the gold market spoofing continued?  We believe it has and the practice has been tacitly approved by the U.S. government and its agencies (CFTC and SEC) to depress gold and silver prices.

Why do you think there’s such a huge premium for precious metals coins vs the spot or futures price of same?

The U.S. won’t return to the gold standard, which it abandoned officially in August 1971.  The St. Louis Fed explained why in a November 2017 blog post:

“For every Federal Reserve dollar that was issued, the Reserve Bank had to have 40 cents worth of gold in its vault downstairs in the basement,” explained David Wheelock, vice president and deputy director of research.

“The U.S. mines a lot of gold, but we’re not the biggest producer,” [Note 2.] Wheelock said. “The bigger suppliers of gold would have more control over our monetary policy, and there’s no reason to have it because we can get the advantages of the gold standard and avoid the disadvantages without being on a gold standard.”

What is less talked about are the BRICS nations (Brazil, Russia, India, China, and South Africa), along with OPEC+, getting close to creating a new currency to pay for oil.  The new currency would be backed by commodities.

That would be the end of recycled Petrodollars and would have a profound negative effect on the U.S. economy.

A stronger dollar reduces demand for oil by making the fuel more expensive for buyers using other currencies so there’s incentive for countries to pay for oil in a currency other than the U.S. dollar (Russia demands payment of its oil in Rubles).

There’s also a speculation that the U.S. is attempting to decrease demand for oil to not only lower inflation, but to make Russia weaker. Our declared enemy is Russia/Putin, so the inside chatter of crashing demand is partially political.  If that’s true, it seems to be stupid in my opinion.

The deputy managing director of the International Monetary Fund (IMF) recently explained how Central Bank Digital Currencies (CBDC) can be programmed to determine what people are allowed to buy and insisted they should be used alongside a China-style Social Credit Score system.  Unlike cryptocurrencies, which are private, Central Bank Digital Currency (CBDC) will be issued and controlled by the central banks themselves.  In many ways, it’s the same as banknotes, but that every single transaction will be monitored for compliance.

Opinion: If any western Central Banks try to pursue the CBDC I believe the dollar will crash shortly thereafter!  It will end freedom as we know it.  Let’s just say this will make virtually all people into serfs.

Are We Becoming a Totalitarian Society?

According to the famous political scholar Hannah Arendt (1906 -1975), a totalitarian society is one in which an ideology seeks to displace all prior traditions and institutions, with the goal of bringing all aspects of society under control of that ideology. The state literally defines and controls reality. Truth is whatever the rulers decide it is.   Here are two quotes that should make you afraid that the U.S. is turning into a Totalitarian Society:

“Before mass leaders seize the power to fit reality to their lies, their propaganda is marked by its extreme contempt for facts as such, for in their opinion fact depends entirely on the power of man who can fabricate it.”

“The true goal of totalitarian propaganda is not persuasion, but organization of the polity... What convinces masses are not facts, and not even invented facts, but only the consistency of the system of which they are presumably part.”

― Hannah Arendt, The Origins of Totalitarianism