Many investors have been puzzled, as to why Gold has not rallied in the last two years as a result of accelerating inflation and geopolitical crisis’ like the war in Ukraine that could easily spread to Eastern Europe. As we will show, gold historically does very well when inflation climbs above 3% (it’s close to 9% in the U.S. now.  Yet Gold has declined year to date (see chart below).

Disclaimer: The Curmudgeon is baffled and hugely disappointed by the weakness in gold and precious metal mining shares which he owns.  Victor also owns physical gold and silver.

Mainstream media cites the super strong dollar and rising interest rates. Amid growing recession risks, investors have opted for the U.S. dollar instead of precious metals.  But there is another possible reason: the gold market has been manipulated!

An eye-opening article by the well-known Peter Hambro was published by British economics and politics news site Reaction. The article titled “Don’t forget the golden rule: whoever has the gold makes the rules” is intriguing for a number of reasons.  It pulls no punches in highlighting the manipulation of the gold price and naming the types of entities responsible, while explaining some of the mechanisms used in the fractional-reserve London paper gold game.

The chart below from the US Office of the Comptroller of the Currency (OCC), now shows the massive extent to which gold bullion banks such as JP Morgan have amassed precious metals derivatives contracts to hold down the gold price.

Hambro describes this manipulation of the gold price using derivatives as a ‘tinder-box’, which ‘disinformation [has] for many years kept the lid on.” But who, you might ask, is directing this disinformation and this gold price manipulation?  According to Hambro, it’s the Bank for International Settlements (BIS) in Switzerland, i.e., the central banks’ central bank.

Hambro states that: “Since 2018 the Financial Stability Desks at the world’s central banks have followed the Bank for International Settlements’ (BIS) instruction to hide the perception of inflation by rigging the gold market.”  But since the central banks ‘need cover’ and ‘cannot be seen’ to be rigging the gold price, Hambro adds: “The only way to achieve the cover is by smashing the price of physical gold by the alchemical production of ‘paper gold’.” 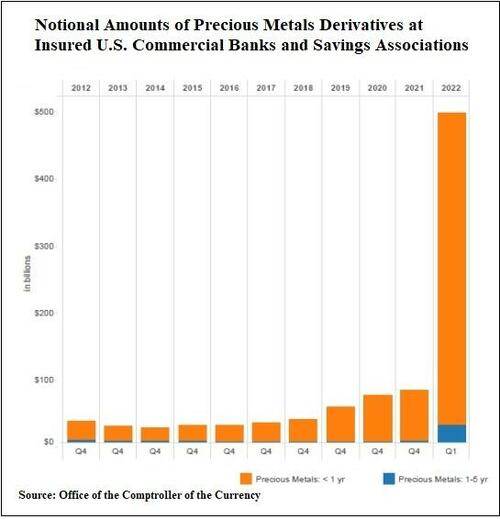 “With the help of the futures markets and the connivance of the Alchemists, the bullion traders – yes, that includes me, I was Deputy Managing Director of Mocatta & Goldsmid – managed to create an unshakeable perception that ounces of gold credited to an account with a bank or bullion dealer were the same as the real thing. “And much easier, old chap! You don’t have to store or insure it.”

The gold credit that Hambro is referring to here is the LBMA's infamous ‘unallocated gold’, with ‘the futures markets’ being the COMEX.

The BullionStar website has for years been saying the very same thing. In particular, see here and here.

A Bloomberg article titled, “JPMorgan Gold Desk Ripped Off Market for Years, Jurors Told,” states that “the precious-metals business at JPMorgan Chase & Co. operated for years as a corrupt group of traders and sales staff who manipulated gold and silver markets for the benefit of the bank and its prized clients, a federal prosecutor told jurors in Chicago.  The government says Nowak’s business operated as a criminal enterprise, manipulating prices from 2008 to 2016 by placing thousands of trade orders that were never intended to be executed.

“This case is about a criminal conspiracy inside one of Wall Street’s largest banks,” said Lucy Jennings, a prosecutor with the Justice Department’s fraud section. “To make more money for themselves, they decided to cheat.”

Spoofing, banned by law in 2010, involves huge orders that traders cancel before they can be executed in a bid to push prices in the direction they want to make their genuine trades profitable. While canceling orders isn’t illegal, it is unlawful as part of a strategy intended to dupe others.  High Frequency Traders (HFT) have also been accused of spoofing and front running customer orders.

“When this trick works, there is somebody else on the other side of the deal that lost,” Jennings told jurors in her opening statement. “Somebody got ripped off.” She added, “We will prove that all three defendants knew from day one that this trading was wrong and did it anyways.”

Commodities manipulation and in particular spoofing have become a major focus of the Justice Department, which has brought several other cases in recent years, including against NatWest and former traders at Deutsche Bank and UBS.

JPMorgan agreed in 2020 to pay more than $920 million and admitted to wrongdoing to settle with the DOJ and Commodity Futures Trading Commission (CFTC) over the conduct of the traders who have pleaded guilty or are facing trial. 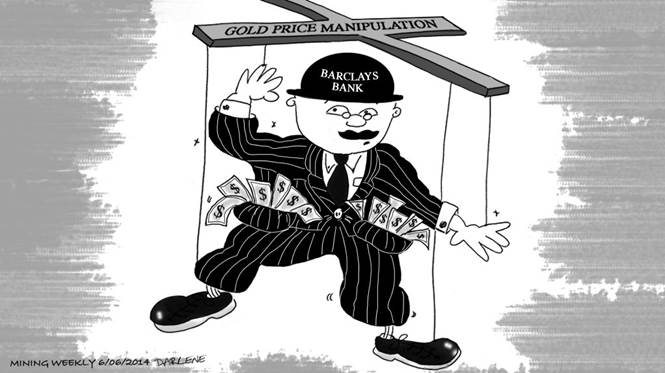 Gold normally performs well during periods of high inflation. In years when inflation was higher than 3%, gold’s price increased 14% on average.

The charts below show the rapid increase in inflation this year while gold (and mining shares) have declined.  What a contrast and departure from historical correlations! 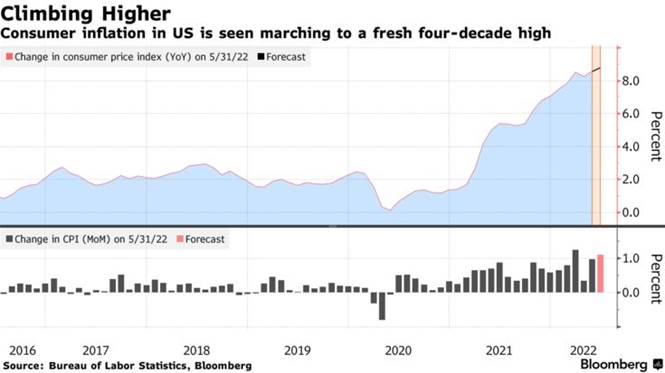 The main reason we see for gold’s historically horrible performance in 2022 (with inflation accelerating to almost 9%) is the market’s belief that real U.S. interest rates will rise significantly (although they are currently still negative).  However, the ECB and BoJ are still pursuing ultra-easy monetary policies, which have caused their currencies to decline to multi-decade lows against the U.S. dollar.  As a result, institutional investors have been selling foreign currencies to buy: the U.S. dollar on Forex markets, dollar derivatives, or “strong dollar” ETFs.

Hence, the U.S. dollar (and NOT Gold) has become the investment of choice during this global inflationary period.

Be well, stay healthy, try to find diversions to uplift your spirits (Curmudgeon goes to live concerts and MLB games), wishing you peace of mind, and till next time………