Does this sound familiar?

“The stock market exploded in record trading with a broadly- based rally which came after a big gain the previous day.  Treasury note and bond prices surged as investors and traders became more confident that short term interest rates might not rise much more in the face of moderating economic growth and lower inflation.   The dollar was mostly lower, losing ground from records set a day earlier in Europe.”

You might think the above quote describes the stock and bond market rallies of October 3rd and 4th.  Wrong!  It is edited from the August 3, 1984, NY Times Business section.

A mini-bear market had started in early January 1984, which the Curmudgeon believed was still intact despite the early August rally.  As a result, I shorted several tech stocks, S&P 500 futures and bought index puts.  That was dead wrong as the rally continued without any significant retracement.  I had to cover my short positions with significant losses. The lesson I learned was to respect a strong, broad-based rally, especially when it occurs after weeks of declining prices. I vowed to not ever again fade a strong rally by entering/increasing bearish positions!  That worked very well until this year!

“On consecutive sessions, buyers overwhelmed sellers in NYSE-listed securities. More than five times as many securities advanced as declined, and more than ten times as much volume flowed into those securities. Similar thrusts always preceded a positive one-year return in stocks.” 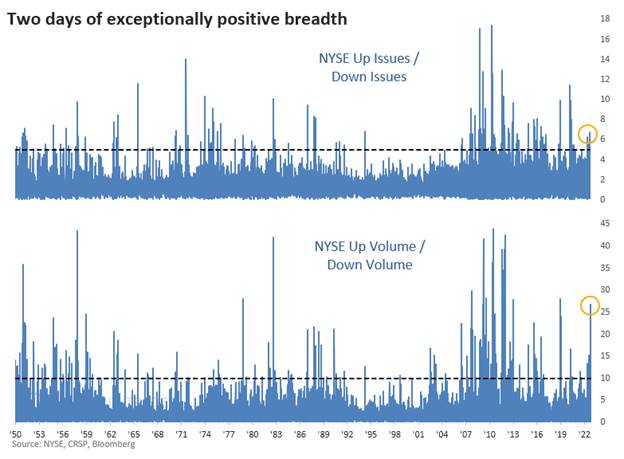 When more than ten times as much volume flowed into advancing versus declining securities, returns were even more consistently positive as shown in the graph and table below.  On October 4th big up day, the volume in S&P 500 stocks was 5,146,580,000 shares which was almost twice the daily average volume. 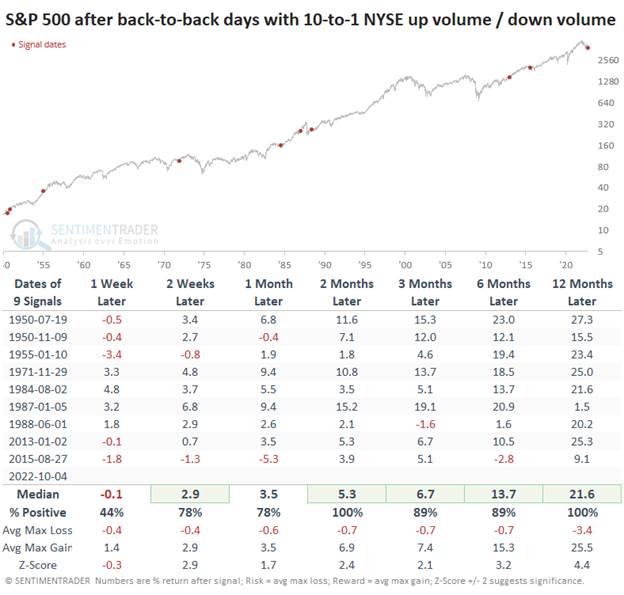 Astonishingly, the October 3-4 rally has failed badly!  The reason for that is Fed cockroaches coming out of the woodwork to talk the markets down.

For example, Minneapolis Fed President Neel Kashkari said on October 6th, “As interest rates rise, I fully expect there to be losses and failures in the global economy.”  Not to be outdone, Federal Reserve Board governor and FOMC member Christopher Waller said, “I am not considering slowing or stopping rate increases due to financial stability concerns.”  That sounds like the mafia talking!

Here’s what Bespoke had to say about Thursday’s historic reversal:

“The S&P 500 ETF (SPY), a proxy for the US equity market, did something today that it has only done four other times in its history dating back to 1993.  Today, SPY gapped down more than 2% versus yesterday's close when the opening bell rang this morning, and then we saw a wave of buying come in that pushed it not only up for the day, but up by more than 2% by the close.  There have only been four other days that saw SPY open down by more than 2% only to reverse and close the day higher by more than 2%.”

The table and graph below tell the story: 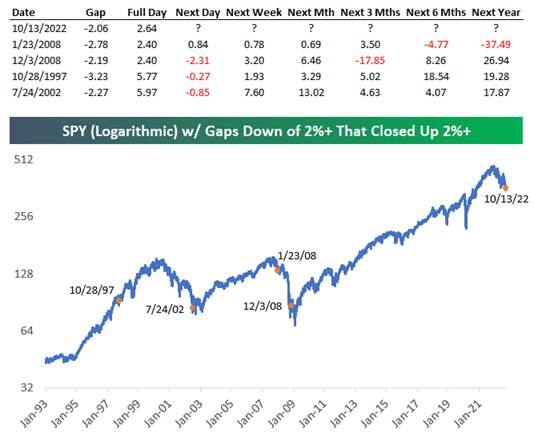 “Today's move also "engulfed" the prior three days trading ranges for SPY, which is another extremely rare event.  Only two days in the entire history of the SPY had similar price action where the previous three days were engulfed by a big rally.”  That’s shown on this chart: 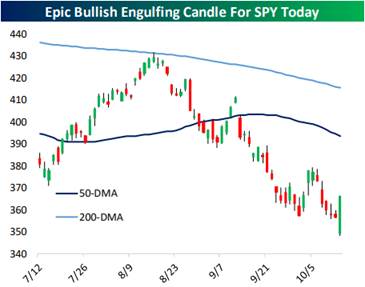 To make matters worse, bond markets are starting to show signs of massive dislocation as trading in U.S. Treasuries has experienced some of the largest swings since the early days of the pandemic, while the UK gilts market has seen the wildest moves on record.

Meanwhile, a Bloomberg index that captures illiquidity in the bond market has soared to levels only just shy of those reached during the worst of the pandemic in March 2020.

Due to QT at full throttle, the Fed is no longer the largest buyer of U.S. Treasuries.  And it’s unclear who will replace the U.S. central bank as the buyer of last resort. Foreign monetary officials purged $29 billion in Treasury securities in the week ended Oct. 5th, bringing the four-week decline in holdings to $81 billion, according to Federal Reserve data. It’s the most-extreme outflow since March 2020, leaving total holdings at $2.91 trillion. At the same time, large commercial banks in the U.S. are already shrinking their securities portfolio, versus last year when they were still buying.

Fasten your seat belts because it’s going to be a long wild ride!  Please see our companion piece for Victor’s thoughts on the Fed and its “criminal” monetary policy.