Accomplishing the Means to the Ends Chosen

No one would begrudge the Fed for being concerned about inflation. “Nothing works in an economy (in the long run) with high inflation,” Fed Chair Powell has said.

“Economics is the science of the means, to be applied, for the attainment of ends chosen.”

The key point is there are several MEANS to accomplish the ENDS CHOSEN.  We explain why the Fed’s means to the end is utterly incorrect and suggest a much better course of action.

The financial system is complex. There is no way the average person, in or out of Wall Street, can understand the subtleties that surround the variation of outcomes that are possible.  That’s especially true with the Fed’s unlimited power to print money and control the cost of credit as they have taken from the 1913 Federal Reserve Act.

Instead of liberty and very limited federal government we have given “The Leviathan” of total unlimited government controlling virtually everything one does in life.

Today we have “the Fed raising rates to lower inflation” come hell or high water.  Is that the correct means to accomplishing the ends chosen?

Interest rates are the “cost of credit.” The higher the interest rate the lower the amount of marginal borrowers and economic growth.  Historically, raising interest rates without decreasing money supply growth did not lower inflation.

As stated in many other Curmudgeon posts, the FOMC hawkish rate rising rhetoric in advance of policy meetings was intended to talk markets down in order to create the reverse wealth (making investors poorer so they’d spend less).

The FOMC has effectively become a GANG!  A Gang is led by a leader and there is no dissent! Like a tribe the leader controls the show, and all the peons follow or die/fired.

What is missing from this grotesque policy is the lack of “deliberation” at the FOMC meetings, where the data can be discussed, debated, or contradicted.

Collaboration is a working practice whereby individuals work together for a common purpose to achieve what’s best for “the people.” Collaboration enables individuals to work together to achieve a defined and common business purpose for the economy within the law (the Constitution). Participants explore and debate the pros and cons based on facts - not on some soothsayer’s desire or prediction. Without debate of the facts, you have an authoritarian/totalitarian effective collectivist dictate. The FOMC should not act like the Gestapo of finance which it is now doing!

After finally admitting that inflation was NOT “transitory” on November 30, 2021, Powell and the Fed did nothing to stop it till March 2022 when they ended QE and ZIRP (they stopped buying bonds and raised rates +25bps from 0-25bps previously).

Since then, they’ve tried to overcompensate for that huge mistake by frequent and ultra large rate increases.  That has destroyed all financial, commodity, crypto and foreign currency markets.  With mortgage rates north of 7% and housing affordability at an all-time low, real estate prices are set for a collapse.

The Little Engine That Couldn't 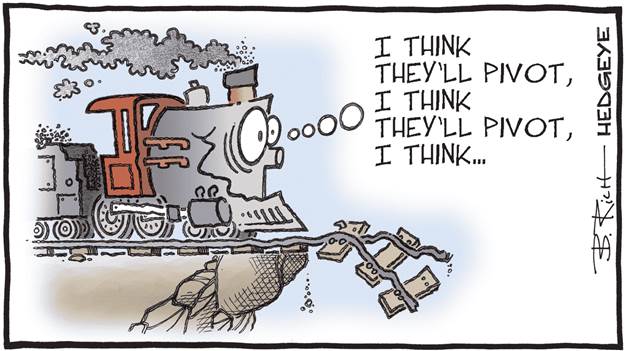 After maintaining an ultra-easy monetary policy since the 2008-2009 great recession, the Fed has totally reversed course with the largest increase in short term interest rates in the shortest time in all of U.S. history.  That has caused a recession (which is likely to deepen), a crash in asset prices (over $15 trillion in wealth has been wiped out).  If the jumbo rate rises continue, it will lead to a depression.

WSJ - Fed’s Inflation Fight Has Some Economists Fearing an Unnecessarily Deep Downturn:  “They’ve done a tremendous amount of tightening,” said Greg Mankiw, a Harvard University economist who advised President George W. Bush. “Recessions are painful for a lot of people. I think Powell’s right that some pain is probably inevitable…but you don’t want to cause more than is necessary.”

Please see Other Voices below for more on the deteriorating U.S. economy caused by the Fed’s reckless rate hikes (after doing nothing to control inflation for years).

The Fed’s hidden agenda was apparently to cause a massive loss of wealth in every asset class in order to crush demand, and thereby lower prices.  Such a monetary policy has never occurred in U.S. history, and it is insane… It should be called a criminals policy, because of the collateral damage it has inflicted on anyone that has any investments other than cash/CDs.

“The wealth effect played a greater role than it ever had in inciting the inflationary spiral, and it’s also going to play a great role in reducing it,” Doug Ramsey, chief investment officer at the Leuthold Group said in an interview at Bloomberg’s headquarters in New York. “When you think about the stock market declining in conventional percentage terms on the index, that understates the amount of wealth that it wipes out.”

The CPI MADE ITS HIGH IN JUNE AT 9.06% and is still high at 8.2% YoY. The core rate of the CPI is at “new highs” of 6.63%. So, Fed tightening is likely to continue for some time, despite the collateral damage it’s caused.

All Asset Classes are Crashing!

The Fed’s non-stop jumbo rate hikes this year have resulted in many crashing markets.  Here are a few scores showing the damage done:

·        Commodities and foreign currencies are all down double digits since rate hikes started this March.  British Pound, Japanese Yen and Euro have suffered huge declines.

The unprecedented destruction in every asset class has been breathtaking and has caused tremendous anxiety.

How to Lower Inflation:

In the latter half the 1970’s, and early 1980’s the Fed Funds Rate approached 20% yet it did not end inflation until then Fed Chairman Paul Volker curtailed money supply growth.  Short term interest rates went from 3.5% to 20% over 12 years, but inflation didn’t decrease until the money supply stopped growing in 1981.

-->If the Fed wants lower prices, then it should lower Money Supply growth over five years to an annual rate of +5% and let the markets determine interest rates.

In the 1970’s I owned a specialist options business (Hugo Securities) trading on all option exchanges with 39 traders. I financed my options positions (inventory) with a “demand loan” from Chemical Bank. If the bank wanted the loan back, they would simply “demand” payment within 24 hours. So, you could use the loan, but not spend it (or you might lose it)! That happened in 1981. The bank called in the loan, and I had 24 hours to wire back the borrowed money. To do so, I had to liquidate 75% of my positions. This happened all across the nation and credit/money was not available at any price. The economy came to an abrupt halt.  So did money supply growth and therefore inflation stopped.

“We are looking for a recession to begin in the first half of next year,” Bank of America’s head of U.S. economics Michael Gapen tells CNN.

“The premise is a harder landing rather than a softer one.”

2.  Edward Jones: “The wealth effect is being felt not only in equities and financial markets, but also housing prices going down,” Mona Mahajan, senior investment strategist at Edward Jones, said in an interview. “That diminished wealth effect is what can be a self-fulfilling cycle: consumers may rein in their purses, and that has a ripple effect on the economy

3. “The odds of a financial crisis, I say, are greater the more the Fed hikes, the longer the Fed hikes and the more that inflation stays sticky,” Mark Chandler, global currency head at Brown Brothers Harriman said via phone on Friday. Nonetheless, “a crisis could hit with no warning.”

Will Jay Powell Be Remembered as Herbert Hoover?

The worst mistakes ever made by a U.S. President were from Herbert Hoover. Starting in 1929 with the Smoot Hawley Tarriff Act, then he increased tax rates in a Depression from 25% to 63% in 1931 (the worst year for the S&P since 1926 or the DJI from 1900.), followed by increased regulations, and finally to let the money supply to drop 33%.

Hoover was a Republican. He was just plain stupid to the 10th power. I can associate his totally wrong decisions to those of Jerome Powell who also is plain stupid!

Powell has raised rates at every FOMC meeting since March with jumbo 75bps rate hikes at the last three meetings and another two jumbos planned for November and December.

The people of the U.S. are like a dog on a leash. The extent of their freedoms are the length of the leash. Worse is these dogs don’t bark. The people accept the control by government that is at best called Serfs and worst Slaves to Government authoritarians. But the Fed is stupid, and the House and Senate representatives have become bought and paid for servants of Corporate America (miscreants).

Sometimes a bit of common sense goes a long way, and this quote, attributed to John Wayne says it all:

"Life is tough, but it's tougher if you're stupid."

This quote is a great reminder to all of us that life can be difficult, but not necessarily as difficult as we sometimes make it.