Stagflation Scorecard: Effects, Risks and Parallel to the late 1970s

It was a very bad week for stocks and bonds after the Fed’s largely unexpected 75 basis points (bps) rate hike was leaked by the Wall Street Journal on Monday morning.   [Fed Chair Powell said in May that a 75-bps rate hike in June was “off the table.”]  It was the largest Fed Funds rate hike since 1994.

Other markets showed distinctly recessionary traits (more on recession risks below). After shooting higher ahead of the Fed’s telegraphed rate hike, Treasury yields fell sharply as the market pulled back its expectations of future tightening. The two-year note, the coupon maturity most sensitive to Fed moves, rose 11.7 bps in yield on the week, to 3.164%, but that was off 27.1 bps from Tuesday’s close. The benchmark 10-year yield was up 8.2 basis points (bps), to 3.238%, but down from the 3.482% recorded on Tuesday June 14th.

Oil prices were hit with a deflationary downdraft. Nearby crude-oil futures ended the week at $109.56 a barrel, down 9.21% for the week and far below the spike to $130 in early March. That was reflected in energy shares, which were one of the few sectors higher this year. The Energy Select Sector SPAR XLE –5.47% exchange-traded fund (ticker: XLE) fell 17.16% on the week and ended down 20.36% from its closing peak hit on June 8, which had represented a double from last year’s low.

Dr. Copper, that most economically sensitive commodity, fell 6.6% on the week and was down 18.5% from its early March high.

Stagflation Produces a Sea of Red:

In stagflation, all assets (with few exceptions) lose.  There are no long side hedges or decline resistant “balanced” portfolios. A 60/40 portfolio suffers double digit losses, as it has this year and during the late 1970s through early 1980s.

According to a research note from Bespoke Investment Group, a 60/40 portfolio suffered a negative total return of 17.8% since the beginning of 2022, the worst start to a year since 1976 and the second-worst six-month showing since then. Not even the 2007-09 financial crisis was as painful for such a 60/40 portfolio, the advisory noted.  That’s because both portions of the portfolio have been losers this year.

Indeed, 2022 has been a sea of red for almost all asset classes. Let’s assess the damage:

By now, I think readers get the message loud and clear:  There’s been “no place to hide” since earlier this year when the “Free Money Party” ended and “the FAANG trade started to show cracks,” as noted by the Curmudgeon here and here.

Those were also the dominant themes of the world economy and financial markets in the late 1970s. That period ended in August 1982 after a brutal monetary tightening in the US., a sharp reduction in inflation (due to our hero x-Fed Chairman Paul Volker RIP, who raised rates while reducing the growth of the money supply) and a wave of debt crises in developing countries, especially in Latin America.  Could the same fate await today’s world economy and financial markets?

Inflation is well above target in almost every country. As in the 1970s, this is partly due to one-off shocks — then two wars in the Middle East (the Yom Kippur war of October 1973 and the Iran-Iraq war which began in 1980), this time the COVID pandemic and Russia’s invasion of Ukraine.

Policymakers tended to blame inflation on temporary factors then, just as we have seen more recently with Fed chairman Powell insisting (for a very long time) that inflation was “transitory.” See Victor’s Analysis below.

Most important is the danger that today’s inflation will become embedded in expectations and will therefore persist.  Such inflationary psychology was prevalent throughout the 1970s and early 1980s, which made the Fed’s inflation fight much more difficult and painful.

The report states: “The removal of monetary accommodation in the United States and other advanced economies, along with the ensuing increase in global borrowing costs, represents another significant headwind for the developing world. In addition, over the next two years, most of the fiscal support provided in 2020 to fight the pandemic will have been unwound. Despite this consolidation, debt levels will remain elevated.”

Victor notes that a big difference between the past high inflation environment from 1978-1982 and now is the US debt levels. In particular, a debt to GDP ratio of about 34% then vs 130% today.

The World Bank report says: “Reducing the risk of stagflation will require targeted and impact measures by policy makers across the world.”

Interestingly, the measures recommended by the World Bank do not include aggressive tightening of monetary policy.  In fact, that could cause acute financial stress they say.

“The simultaneous materialization of several downside risks could result in a much sharper and more prolonged global slowdown.”

“In particular, faster tightening of US. monetary policy [1.] could cause acute financial stress in Emerging Market Developing Economies (EMDEs).”

Note 1.  Astonishingly, Fed Funds Futures now imply an 86.2% probability of a 75 bps Fed Funds rate increase at the July FOMC meeting vs only a 0.5% probability one month ago!  On Saturday, Fed governor Christopher Waller said he would support another 75-bps rate rise at the central bank’s next meeting in July if, as expected, data showed that inflation had not moderated enough.

It’s a given that more and bigger Fed rate hikes will cause a decline in US GDP and an increase in unemployment. How painful might that be?  “If monetary policy tightening were substantial and prolonged, messy and costly debt crises are likely to emerge,” according to Martin Wolf of the Financial Times (on-line subscription required).

One encouraging sign today is that the price of oil, while still elevated, may be peaking.

In the context of all the negative analysis is the fact that, in most cases, stock valuations are still at historic highs! The P/Es of many stocks continue to be at nosebleed levels.  For example, the Walt Disney Company (DIS) P/E is currently 63.74 despite that its stock price of $94.34 on Friday is down 50% from its 52-week high!

Also, there’s a huge difference between the honesty and knowledge of the Fed Chairmen then and now. In October of 1979, Fed Chairman Paul Volcker returned from Europe where he was thoroughly castigated for US inflation, which was adversely affecting the rest of the world. Volker immediately stated that he would attack inflation by limiting MONEY SUPPLY growth.  Although painful for the US economy and financial markets, it worked!

Today, Fed Chairman Powell has the CHUTZPAH to suggest that there is no correlation between money supply growth and inflation anymore. Since when?  That strong correlation has been proven a dozen times since the 1920’s by many prominent economists, including John Maynard Keynes.

Any honest economist knows that increasing the money supply faster than the growth in real output (GDP) will cause inflation to rise. The reason is that there is more money chasing the same number of goods and services. Therefore, the increase in monetary induced demand causes companies to increase prices.

Also, the first sentence in the Fed Chairman’s June 15th press release (after raising rates by 75 bps) is a total lie: “Overall economic activity appears to have picked up after edging down in the first quarter.”  Every economic number released last week shows the exact opposite-- that the US economy is weakening!  Loretta Mester, President of the Cleveland Fed, contradicted Powell on Sunday’s CBS Face the Nation program, “We do have (economic) growth slowing . . . and that’s OK, we want to see some slowing of demand to get in better line with supply.”

Let’s also not forget Powell’s often repeated claim that “inflation is transitory,” which was his excuse for continuing QE till March 2022 and NOT raising rates earlier (despite so many Fed critics that urged him to do so).

I strongly believe that Powell’s ignorance of the money supply/ inflation correlation and his misleading statements should force him to resign!  Powell is without doubt the worst Fed Chair in the last 90 years – and I’m being polite! (the Curmudgeon concurs).

The key unknown now is whether the Fed’s new aggressive rate rising policy will cause a much deeper and longer bear market in equities.  To prevent that, the Fed must tone down its rate rising rhetoric.

We don’t think there will be anything close to a “soft landing” for the US. economy. 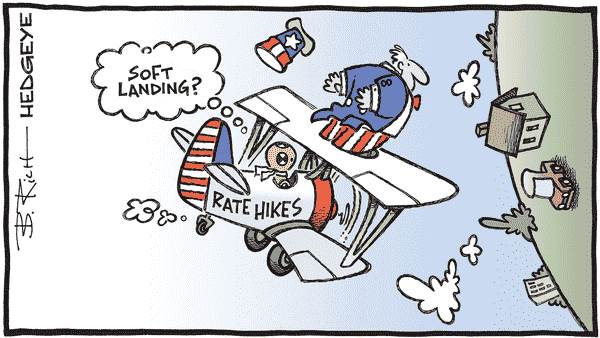 Furthermore, Victor and I believe that the Fed will cause a recession this year or has already done so.  We think the US is likely to experience two consecutive quarters of negative GDP in the first half of 2022 (1st quarter -1.5% annual rate with Atlanta Fed GDP Now forecasting 0% GDP growth for 2nd quarter).  That is primarily due to the Fed’s abrupt and unexpected change in monetary policy.

As the chart below indicates, the Fed has been joined by other global central banks which collectively have raised short term interest rates 124 times this year.

“Stifling domestic demand with too-late rate hikes could now result in a prolonged recession, especially because policy works with a three-to-nine-month lag on the economy,” Anionic Capital’s Peter Cecchini said, adding that the Fed’s stubbornness to wait so long to raise interest rates could lead to a costly policy whipsaw.