In-line with BofA’s Economics team, Michael agrees the Fed is well behind the curve in hiking interest rates. In addition, leading indicators for corporate profits, like the NY Empire Manufacturing Survey (highly correlated to the S&P 500 as per graph below), are starting to head south. Michael thinks the combination of rates up and profits down is bad for credit and stocks. 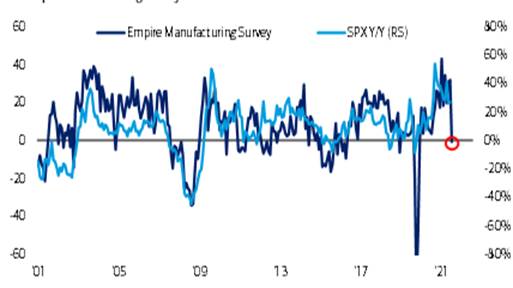 rate expectations are too low.  He notes that stocks, credit, and housing markets have been conditioned for an indefinite continuation of the "Lowest Rates in 5000 Years.” So, it might only take a couple of Fed rate hikes to cause an “event” (see Conclusions below).

Michael notes investors aren’t short just yet with $52B of inflows into stocks 2022 YTD. He recommends being long volatility, high quality, and defensive stocks on tighter financial conditions.

BofA U.S. Equity & Quantitative Strategist Savita Subramanian agrees that some of the bearish themes for equities that the bank worried about in 2021, such as tighter monetary policy and margin pressures from labor, are now playing out.  Here’s an interesting historical drawdown table for your consideration:

BofA’s Hartnett writes that the Fed will be raising rates in highly overvalued credit and equity markets.  He adds that Fed tightening always "breaks" something.

What could that “something” be this time around – stock, bonds, real estate, art, cryptos, take your pick?

One possible surprise at this week’s FOMC meeting would be for the Fed to further accelerate the tapering of its bond purchases, winding them up by mid-February, a month earlier than currently scheduled, wrote Nomura economists Aichi Amemiya, Robert Dent, and Kenny Lee in note to clients. That would represent a marginal reduction of $20 billion in Treasury and $10 billion in agency mortgage-backed securities acquisitions but would send a signal to the market about the Fed’s anti-inflation resolve.

The U.S. central bank continues to buy $40 billion of Treasuries and $20 billion in MBS per month, adding to its near-$9-trillion balance sheet.  That means that it is easing, rather than tightening, monetary policy, while “talking” of the need to curb inflation.

Fed “talking the talk” is why Victor believes there will be only two rate hikes this year.

Economists Cynthia Wu of Notre Dame and Fan Dora Xia of the Bank for International Settlements have estimated a “shadow fed-funds rate,” which is based on its asset purchases and tracked by the Atlanta Fed. The Wu-Xia shadow funds rate was minus 1.15% as of Dec. 31st, according to the Atlanta Fed.

Ryding says Wu estimates that a change in the Fed’s balance sheet equal to 10% of U.S. gross domestic product—about $2 trillion—is roughly equivalent to a 100-basis point change in the fed-funds rate.

As for the Fed beginning to normalize its balance sheet, the Nomura economists think the announcement could come as early as the March or May FOMC meeting. Most Fed watchers expect a later start to the process of reducing the central bank’s securities holdings, after two or more rate hikes. And almost all think the Fed will allow maturing issues to run off at a predictable pace, rather than sell securities outright.

Nowhere is the impact of Fed monetary policy more apparent than in elevated asset prices – from the doubling of the S&P 500 since its March 2020 bottom to home prices jumping over 20%.

Investors will be listening carefully to what Powell and his cohorts say at the FOMC meeting this week (and beyond) about ending QE (for now), normalizing rates (“neutral is the new tightening”), and reducing its balance sheet (which Modern Monetary Theorists says can grow to infinity?). 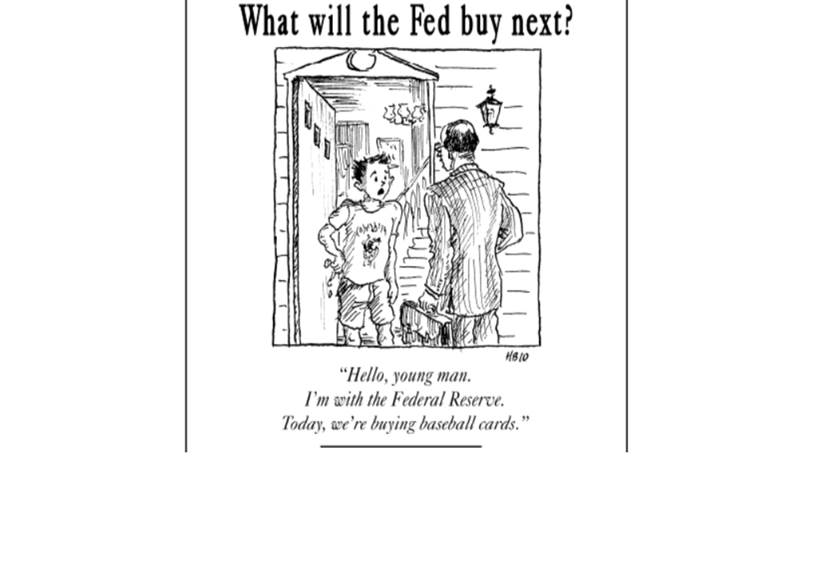