The stock market’s popular FAANG trade is starting to show cracks. Investors say they are reconsidering their approach to trading big technology stocks after a week marked by giant swings in share prices.

The NYSE FANG+ Index, which tracks popular big tech stocks, has tumbled 10% this year, underperforming the broader market. Some stocks in the group, like Netflix and Meta, are off at least 38% from their highs. The S&P 500, in contrast, is down 6.2% from its record high earlier this year.

“As a group, it was very strong over the past 10+ years,” said Amy Kong, chief investment officer of Barrett Asset Management. “At this juncture, you are starting to see some cracks.”

One of the biggest ruptures came after Meta’s (FB) disappointing earnings report (see subhead below) when investors shaved more than $230 billion off the social-media giant’s market value (-26.4% on Thursday), the biggest-ever loss for a U.S. company in a single session. 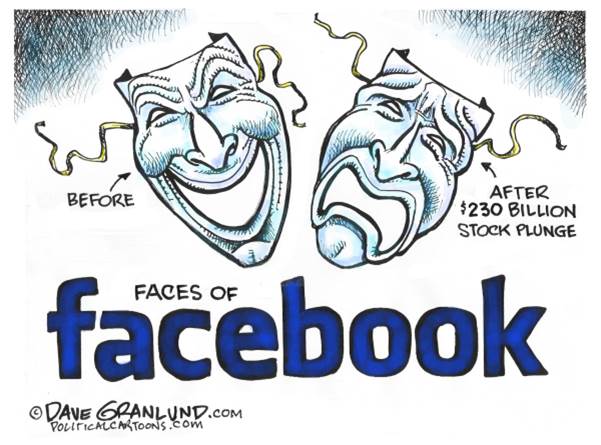 Washington Post - Facebook’s faceplant on Wall Street could be just the beginning for some tech stocks:

The meltdown in high flying technology stocks like Facebook is just the start of the financial changes that will probably result from the Federal Reserve’s decision to end a prolonged era of free money and make borrowing more expensive.

“The market has been very comfortable ignoring valuations on the things that have delivered growth through the pandemic (big tech stocks) … It feels like the world is entering a different environment than the one we’ve been in,” said Roger McNamee, co-founder of Elevation Partners, a private equity firm in Menlo Park, California. “The pricing of risk is changing.”

The Fed’s easy money stance helped fuel an extraordinary bull market in stocks. From its pandemic low in March 2020 to the beginning of last month, the Dow Jones industrial average roughly doubled in value.

Both the Fed and the International Monetary Fund warned in recent months that stock prices could be losing touch with their fundamental values. Relative to earnings forecasts, prices were at “the upper end” of historical experience, the Fed said in November, adding: “Asset prices may be vulnerable to significant declines should risk appetite fall.”

Facebook suffered the biggest impact, with its stock falling 26.4% on Thursday, erasing more than $230 billion in value. Adjusted for inflation, that’s equal to the entire stock market’s loss on Black Tuesday in October 1929.

“Having witnessed the Fed’s big mis-characterization of inflation for most of 2021, concern is mounting that it will now make a second policy mistake — that of pivoting hard from policy inaction to being forced into a bunch of measures that will damage the much needed inclusive economic recovery,” Mohamed El-Erian, chief economic adviser at Allianz, said via email. “Very few asset classes are immune to a twin blow of a Fed policy mistake and patchy market liquidity.”

BofA- Global Growth is Slowing (via email and research report to clients):

BofA Global Proprietary Signals reflect the downward drift in global growth succinctly. Although 78% of the 41 growth indicators still flag a ‘Bullish’ or ‘Neutral’ signal, the proportion of outright ‘Bullish’ signals has fallen off steadily from 81% last May to just 46% today. One of the many indicators we are watching closely is the Global Wave, which weakened for a second consecutive month after peaking in December, suggesting more cautious positioning for investors. In addition to Fed rate hikes and quantitative tightening potentially on the horizon for the US, we are also seeing cracks elsewhere. The Euro Area GDP Tracker has reverted to a ‘Bearish’ signal and the Japan Factory Automation Indicator continued to fall under the clutches of weaker macroeconomic settings. In short, the global economy may be entering a period of slower activity.

In short, the message is loud and clear - the global economy may be entering a period of slower activity. To gauge the market impact of such a move, BofA references their segment analysis from last month, where they dissected the growth cycle (defined using the US ISM Manufacturing PMI) into four distinct parts - accelerating from the base (defined as 50) to the peak (Arc 1), slowing down from peak to base (Arc 2), contracting from base to trough (Arc 3), and recovering from the trough to base (Arc 4). Please refer to bottom left chart below.

Not only are the point-to-point returns associated with Arc 2 unimpressive (world average annualized returns of -4% with 35% hit ratio for 20 episodes), but they also come with steep average drawdowns of 18%.  if history is any guide, global equities could be in for another c.10% correction from here.

BofA analysts have been highlighting the deterioration in market breadth since November. The new year has witnessed a further leg down in the tape, with 58% or 28 out of 48 markets in the MSCI AC World Index now above their 200-day moving averages, down from 84% on 11 November. We also observe an accumulation of new 52-week lows in the S&P 500 Index, as the plunge in speculative assets spills over to the broader market, including the mega-cap tech stocks. And lest we forget, even seasonality trends are out of favor this year.  Since 1930, the average draw down in a U.S. mid-term election year is a staggering 20%.

Bottom-line. A hawkish Fed combined with a slowing growth profile and weak technicals is a perfect recipe for corrections/bear markets.  Prudent risk management calls for defensive positioning in such a scenario. The environment is not conducive for risk assets.

'Valuations across all asset classes have been near record highs.' https://thedailyshot.com/2022/02/03/does-higher-inflation-mean-a-shorter-expansion-cycle/ via @SoberLook 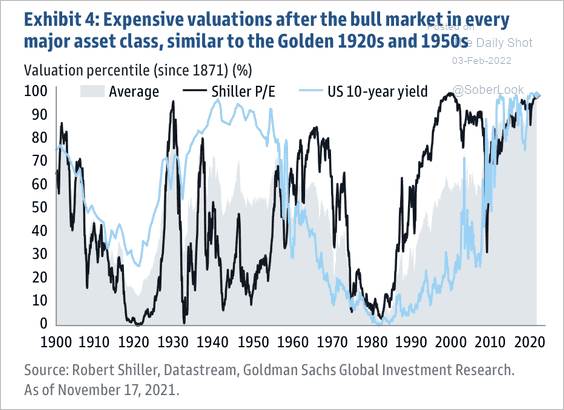