A Tribute to Paul Volcker – Greatest Fed Chairman in History

Paul Volcker was my hero.  He was the person in the financial world I most respected and admired for doing what was right for the country, rather than for big business or politicians only concerned with serving their special interests.  Volcker was the guy who broke the back of accelerating double digit inflation in the late 1970s and early ’80s and thereby ensured U.S. financial stability for years to come.

Mr. Volcker died Sunday at the age of 92, according to his family and the Volcker Alliance, a good government advocacy group founded by the former U.S. Federal Reserve Chairman.

His claim to fame came very soon after President Carter nominated him as Fed chairman in August 1979.  That year, the U.S. inflation rate in 1979 was 11.35% and headed higher.  Gold had doubled in price to over $800/ounce and there was tremendous fear the U.S. would become like Latin American banana republic countries experiencing hyper-inflation.

Ignoring calls for moderation and restraint, Volcker raised the Fed funds and discount rates repeatedly –to as high as 20% - in order to break the soaring inflation that consumed the U.S. economy in the late 1970s.   Initially, that was extremely unpopular with many critics.  However, that later changed, as his actions succeeded in bringing down inflation, making Mr. Volcker one of the most successful central bankers in history.

Mr. Volcker believed that getting inflation under control was a precondition to prosperity. “We were on a track where inflation was feeding on itself, and the longer it went on the harder it would be to deal with,” he recalled in an interview with The Wall Street Journal in October 2018. “You can’t imagine the United States running a 20%, a 25% inflation rate. That’s what people were scared of,” he added.

The task of corralling inflationary pressures proved “a lot tougher than I would’ve imagined,” Mr. Volcker recalled. “It took longer.  I was a bit taken aback. The first actions that were taken, nobody stood up and saluted. They all said, ‘This is more bullshit from the Federal Reserve.’”

It wasn’t until the summer of 1982 that Volcker felt confident he had broken the back of inflation. The inflation rate dropped from 13.5% to around 3% by the end of his first four-year term as Fed chairman.

Mr. Volcker focused on the growth in the nation’s money supply. Milton Friedman, the famous free-market University of Chicago economist had declared that inflation was “always and everywhere a monetary phenomenon,” meaning it could only happen when too much money chased too few goods being made and sold.  Volcker totally understood that.

A severe oversupply of money would cause it to lose purchasing power, as prices rose for cars, gasoline and other consumer goods. Fast-growing money supply, Mr. Volcker reasoned, needed to be managed and restrained to control inflation properly.  Rapid money growth indicated the Fed would pull funds out of the market, resulting in higher interest rates.

Bond market traders got the message loud and clear. Every Thursday afternoon, they eagerly awaited the New York Fed’s release of money supply aggregates—tabulations of the levels of cash, bank deposits, money-market funds and other liquid assets sloshing through the banking system.  Money supply numbers moved the markets in the 1980s.

In his last official post, as chairman of President Barack Obama’s Economic Recovery Advisory Board, formed in response to the 2008 financial crisis, Volcker persuaded lawmakers to impose new restrictions on big banks — a measure known as the “Volcker Rule.” He focused on reining in excessive risk-taking on Wall Street, successfully pushing to limit banks proprietary trading activities.

Volcker’s reputation for austere integrity also made him a popular choice as an independent arbiter. In one instance he oversaw the reclamation of deposits that Swiss banks had failed to return to the families of Holocaust victims.

A new agreement would create a coordinated international monetary and financial system. It would establish rules to guide world monetary policy. It might even include a new global currency to replace the dollar. It would create equilibrium in countries' balance of payments. That would ensure they had adequate foreign exchange reserves. The world is still waiting for such an agreement to be consummated.

The NY Times reports that Volcker was famously frugal, favoring drugstore cigars and ill-fitting suits. In the 1960s, when the driver’s seat in his Nash Rambler collapsed, Mr. Volcker propped it up with a chair and continued to drive the car. As chairman of the Fed, he lived in an apartment building populated by George Washington University students and took his laundry to his daughter’s house in the Virginia suburbs.

“The greatness of Volcker is that he was the exact right guy at the exact right time, when the country desperately needed the right guy to end the crippling inflation,” said Lawrence Kudlow, the director of the White House National Economic Council, in an interview Monday with the WSJ. “He was fearless. He was independent.”

Current Fed Chairman Jerome Powell said in a statement that he was deeply saddened by Volcker’s death. “He believed there was no higher calling than public service. His life exemplified the highest ideals — integrity, courage, and a commitment to do what was best for all Americans.”

Previous Fed Chairwoman Janet Yellen said regarding his steps to tame inflation: “I think it required tough and decisive action that imposed a good deal of pain in the economy in the short run but had a substantial pay-off.”

Ben S. Bernanke, the Fed’s chairman from 2006 to 2014 told the NY Times: “Paul came to represent independence.  He personified the idea of doing something politically unpopular but economically necessary.”

Mark Carney, governor of the Bank of England, praised Volcker as a “towering figure among the central bankers of his generation”, adding in a statement: “The integrity and independence he showed in his battle against inflation helped lead the United States — and with it, the world — through some of the most testing times of the modern era.”

John Williams, president of the New York Fed, said Paul Volcker was “truly a hero of the Fed’s history. He is a towering role model for central bankers the world over,” Mr. Williams added in a statement. 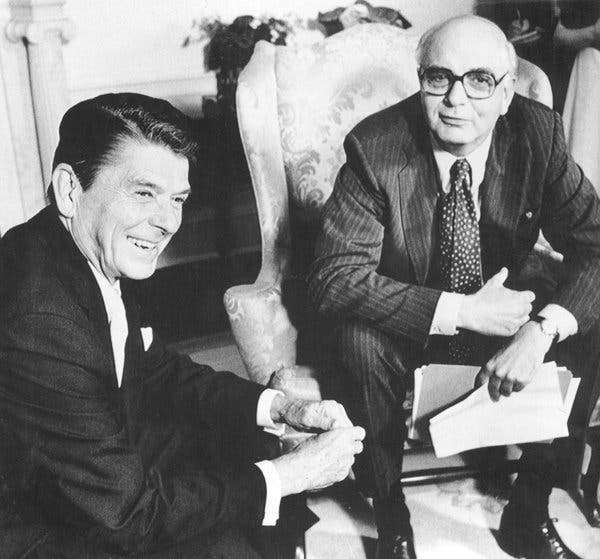 “One of my old friends from abroad once told me — I think he meant it as an ironic compliment — that he thought of my career as a long saga of trying to make the decline of the United States in the world respectable and orderly,” Paul A. Volcker