If the interaction between the U.S. economy and the Federal Reserve Board (the Fed) were a game of chess, the economy just made a recessionary move that said: “Check.”  If the Jerome Powell led Fed ignores that warning it will soon hear “Checkmate” from the economy!

Last week’s U.S. economic numbers were worse than expected and considerably worse than the previous month’s reading.  Here are a few:

·        Expected business conditions were the weakest since 2009 while average expected inflation over the next year rose +0.5% from May, to 8.0%—the highest reading in the survey’s 35-year history.

On Friday, the Atlanta Fed’s GDP Now projection for the 2nd quarter 2022 (just ended) was reduced to -2.1%.  If that projection is anywhere near accurate, then the U.S. will have experienced two consecutive quarters with negative real GDP.

Note:  The working definition of a recession is two consecutive quarters of negative economic growth as measured by real GDP (although he National Bureau of Economic Research (NBER), the official arbiter of U.S. recessions and expansions, doesn’t always agree with that metric. NBER classified the COVID pandemic induced 2020 recession as being only one month in duration).

The ISM Manufacturing PMI is one of the most widely watched and trusted measures of manufacturing activity and overall economic health.  It is highly cyclical and captures the "growth rate cycle" quite well.  A reading above 50 signals an expansion or positive growth, while a reading below 50 signals contraction or negative growth.

On Friday, the ISM PMI for June showed a more significant than expected decline, falling from 56.1 in May to 53.0.  More importantly, the new orders component fell into contraction territory with a reading of 49.2 for June.

The spread between the new orders and inventory readings is a reliable leading indicator of the overall ISM Manufacturing PMI.  This makes sense because if new orders are falling faster than inventory, then companies must cut production in the future to combat a building imbalance.

The spread between the ISM new orders and inventory sub-components crashed in June, which is a strong warning sign that future declines in the overall ISM Manufacturing Index should be expected. 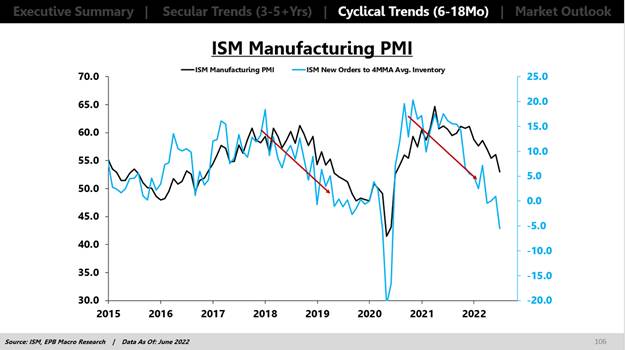 Given that the ISM Manufacturing PMI holds a very strong correlation to earnings estimates, credit spreads, and more, the probability that we see further declines should be a warning sign that more turbulence is ahead in cyclical risk-assets.

What happened to the “strong economy” that Fed Chairman Jerome Powell used as an excuse for last month’s out-sized Fed Funds rate increase of 75 basis points (bps)? Fed Chairman Powell’s June 15th statement (which we analyzed in two Curmudgeon blog posts): “Overall economic activity appears to have picked up after edging down in the first quarter.” In our classic “Welcome to the Greatest Show on Earth – Presented by Jerome Powell,” I said that “one must conclude he (Powell) is a fool, grossly incompetent, or a liar.”  Which one do you think he is?  Please let us know!

The Curmudgeon and I strongly believe that Powell is a disgrace to the institution that everyone bows down to (the Fed). He substitutes a fantasy story for obvious facts and ignores that the odds of a recession have been increasing for months. While investment banks and economists raised their recession forecasts last week, we forecast a recession months ago in these columns, starting in this Curmudgeon post:  “My historical analysis of bear markets concludes that those which are “fundamentally caused” (like the current bear market) result in a recession.”

Tom Porcelli, chief U.S. economist at RBC Capital Markets, says this “may be the most anticipated recession ever.” Google searches for “recession” and related terms are as high now as they were in March 2020.  Yet Fed Chair Powell still thinks the U.S. economy is “picking up?”

For the last several weeks, every (short lived) rally in the equity market had a cockroach FOMC member coming out of the woodwork to say the Fed was going to raise rates 50 or 75 bps at the next meeting, with multiple rate increases to bring Fed Funds to 3.25-3.5% by year-end 2022.

As we’ve repeatedly stated in these Curmudgeon blog posts, we don’t agree that the Fed’s “reverse wealth effect” monetary policy will stop rising prices (it will not end the war in Ukraine or supply chain bottlenecks or product shortages). Instead, it will cause tremendous collateral damage.  It’s already making anyone that owns stocks and/or bonds MUCH poorer.

Certainly, the economic data surrounding the Atlanta Fed’s -2.1% GDP projection for the 2nd quarter supports the conclusion that the U.S. is already in a recession.

While the monthly Non-Farm Payrolls report (next one is on Friday July 8th) hasn’t been weak yet, it is a lagging indicator.

Also, there are anecdotal reports of widespread tech industry layoffs and hiring freezes due to a soft economy. Here’s a recent example:

According to Reuters, Facebook/ Meta Platforms CEO Mark Zuckerberg has cut plans to hire engineers by at least 30% this year, he told employees on Thursday, as he warned them to brace for a deep economic downturn.  “If I had to bet, I'd say that this might be one of the worst downturns that we've seen in recent history," Zuckerberg told workers in a weekly employee Q&A session, audio of which was heard by Reuters.

"I have to underscore that we are in serious times here and the headwinds are fierce. We need to execute flawlessly in an environment of slower growth, where teams should not expect vast influxes of new engineers and budgets," Chief Product Officer Chris Cox wrote.

Zero Hedge had this to say: “One month ago we showed that while the BLS still revels in its seasonally-adjusted statistical nonsense to divine the monthly level of payrolls, the real world is seeing a wave of mass layoff the likes of which have not been seen since the COVID crash…When even the most profitable tech companies are bracing for mass layoffs, the bottom is about to fall out (of the economy).”

If the Fed continues raising rates while the U.S. is ALREADY in a recession, it could produce the worst economic downturn since the depression in the 1930s.

In addition to the weak economic statistics noted above, we pointed out in last week’s post that commodity markets have turned down and Copper is in a bear market. This week, U.S. Treasury yields dropped significantly in anticipation of an economic downturn.

The yield on the two-year Treasury note, the maturity most attuned to future Fed moves, slid by 22 bps this past week, to 2.83%, the biggest drop since the March 2020 pandemic market crisis, and 60 bps below its mid-June peak. The benchmark 10-year T-note’s yield fell 24 bps, to 2.88%, and is down sharply from nearly 3.50% in mid-June. 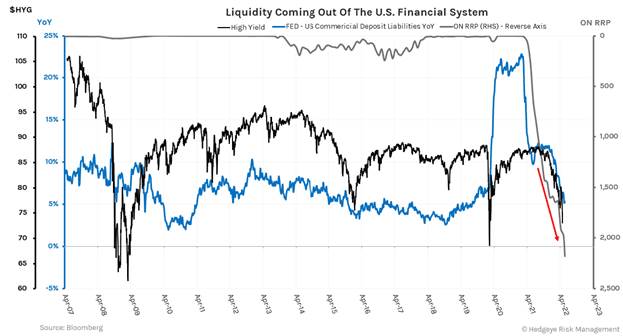 Professor Steve Hanke is an expert on the history of hyperinflation.  In a recent interview with Wealthion, the Professor was asked “Why does the Fed get it wrong all the time?”

Reason: The Fed has ignored Milton Friedman’s Quantity Theory of Money to guide their monetary policy.  Hanke forecast a 9% inflation/CPI high for 2022 (vs actual 8.6% YoY CPI in his last interview over a year ago on Wealthion.  It was based on the Fed ignoring the strong growth in the M2 money supply and monetary base and continuing with QE and ZIRP.

“Of the approximate 400 economists at the Fed and or 700 economists and staff at Fed headquarters in Washington DC the “Democrats outnumber the Republicans 48.5 to 1,” according to Professor Hanke.

Like everything in America these days, the Fed is all about politics! 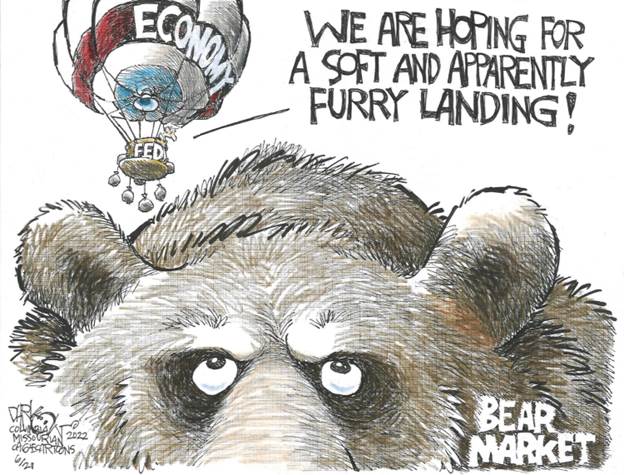 Victor and I are strongly convinced that the U.S. is already in recession. In all of U.S. history we are not aware of any time the Fed has increased rates when a recession was on going. Let alone more than doubling the Fed Funds rate as voiced by so many Fed heads.

Having created the “all asset bubble” and 42-year high inflation rate via its egregious “ultra-QE - free money party” the Fed is now trying to over compensate by aggressively raising rates while consumer confidence and the ISM PMI index are crashing, while financial liquidity is vanishing (see above charts).

If the Fed follows through with its stated Fed Fund rate rises, the credit markets will freeze up, the U.S. economic recession will deepen, and U.S. equities could lose another 30% or more.

What will the Fed do? Or timelier what will they say?  This is now crunch time! What is the Fed’s plan? We will see, but it I don’t think it will be good, as the Fed is now a 100% political institution.

“The laws of Chess do not permit a free choice: you have to move whether you like it or not” Emanuel Lasker

“I am convinced, the way one plays chess always reflects the player’s personality. If something defines his character, then it will also define his way of playing.”              Vladimir Kramnik

Be well, stay healthy, try to find diversions to uplift your spirits, wishing you peace of mind, and till next time……