Welcome to the Greatest Show on Earth – Presented by Jerome Powell

The Fed attempts to explain and sell the public on what it makes them believe is good for the economy and Americans. However, they are really conning you into an agenda which they hope will appease their undisclosed owners (the richest 1% of Americans) and masters (the US politicians they must answer to)!

We ask a rhetorical question about the cause(s) of US inflation.  Do you trust the Fed is our next topic (three guesses but the first two don’t count).  Next, we examine if the US will be in a recession this year or is already in one.  We then suggest what the famous “School of Chicago” economist Milton Friedman would do.  Key observations from Sentiment Trader follow (we recommend you subscribe to this excellent service).  Our conclusions are from former US Treasury Secretary and Harvard President Larry Summers.

-->Please let us know if you like our work and any future topics you’d like us to cover [email the Curmudgeon at ajwdct@gmail.com].

What Caused US. Inflation?

The answer is simple: Inflation was caused by a compounded 15% increase in the broad money supply (M2) [1.] from 2019 till this year.  Not the Russia-Ukraine war which just added fuel to the fire (more below).  And certainly not the COVID pandemic which caused lower prices and reduced economic activity due to shutdowns of many small and medium businesses.

Note 1.  M2 is a measure of the US money stock that includes M1 (currency and coins held by the non-bank public, checkable deposits, and travelers' checks) plus savings deposits (including money market deposit accounts), small time deposits under $100,000, and shares in retail money market mutual funds.

The Fed’s response to the pandemic induced shutdowns was to launch a series of “buy everything” expanded QE programs which ballooned its balance sheet to $9 trillion and greatly increased the money supply.  That is what caused all asset bubbles and rising prices, respectively.

Energy price increases were mostly due to the sanctions on Russia which caused a rise in crude oil prices from $91 dollars a barrel on February 24th to the current $110 per barrel.  If the punishment of Russia for its attack on Ukraine had a different penalty oil prices would surely be much lower.

The increase of Russian assets does not prohibit them from borrowing based on the increase in oil reserve values.  They don’t even have to sell the oil.

On February 23rd the ruble was 0.012 to the dollar and today it is 0.017 – that’s a 42% increase in just four months! That’s almost entirely due to the oil and gas price increases which boosted Russia’s trade surplus with the rest of the world.

Do You Trust the Fed?

If you examine Fed Chairman Powell’s June 15th statement (which we analyzed in yesterday’s post), “Overall economic activity appears to have picked up after edging down in the first quarter,” one must conclude he is a fool, grossly incompetent, or a liar.

You might as well listen to TOYKO ROSE World War II propaganda then statements of the Fed, which give them an excuse to raise interest rates in order to “reduce inflation.”

The Fed press conference Q&A is like a circus show which is intended to make the public believe the Fed is doing something useful.

Is that Jerome Powell or Joe Biden below who has fallen off his bicycle?  It really doesn’t matter! 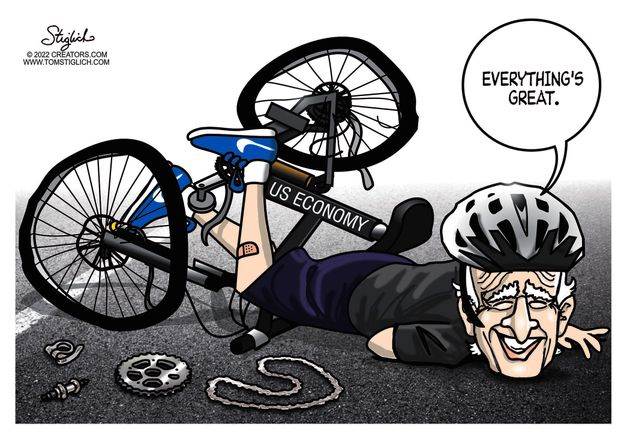 In reality, the Fed’s new rate rising strategy and rhetoric is killing the economy and crashing financial markets.  That makes people poorer, so they curtail spending which will decrease or eliminate price rises due to reduced demand. In essence, that is the “reverse wealth effect” scenario.  Unemployment will also rise as the economy weakens.

Increases in interest rates work with a six months (or longer) lag to the real economy. That coupled with continued supply chain bottlenecks/ shortages and the war in Ukraine imply that inflation will not be coming down anytime soon, despite recent and future Fed rate hikes this year.

Here’s an analogy:  If you gained 100 pounds in the last year and in order to lose weight quickly cut off both your legs you would weigh 60 pounds less.  Would you consider that a success?

Is the US in a Recession?

As noted in yesterday’s post, the US is going to be in be in a recession or is already in one due to last Wednesday’s 75 bps increase in Fed Funds rate and the strong forecast of that same rate increase at the July FOMC meeting.   It’s important to realize that the Fed rate increases were based on a CPI that was up 8.58% Year over Year (YoY) ending in May, compared to an end of March YoY increase of 8.54% (that’s only a +.04% difference!).

As we’ve repeatedly stated, the CPI is a 100% subjective index which is calculated by BLS bureaucrats using substitution and “hocus pocus” magic to make up what they think actual prices are.

The “reverse wealth effect” we’ve been talking about this year has now been picked up by the mainstream media (e.g., this week’s Barron’s) as the likely cause of a US Recession.  Desmond Lachman, an economist and fellow at the American Enterprise Institute agrees with us.  He wrote in a June 16th CNN article:

“One reason to think that the Fed's shift to a more hawkish policy stance could bring on a recession is that it has already caused the asset and credit market bubbles it created last year to burst. Since the start of the year, equity prices have fallen by nearly 25%, bond prices have declined by about 11% and the cryptocurrency market is crashing, with Bitcoin losing a quarter of its value since Friday and Ethereum losing about a third of its value.

The stock market rout has caused around $10tn in US household wealth to evaporate. In addition, at least $3tn in bond and $2tn in crypto-currency wealth has been wiped out by the rout in those markets...  On the assumption used by the Federal Reserve that a $1 sustained destruction in wealth leads to a 4-cent decline in consumption, if sustained, the recent loss in wealth could reduce consumer spending by almost 3 percentage points of GDP.

Also, housing demand is starting to crumble as mortgage rates climb again. Meanwhile, many emerging markets are on the cusp of default, as higher US interest rates cause capital to be repatriated out of their economies, which is putting real pressure on their currencies.

Powell might do well to heed his own advice of needing to be humble and nimble, especially given today's highly fragile financial markets. If not, he risks going down in history as not only the one who let the inflation genie out of the bottle, but also as the one who steered the US economy into a recession.”

What Would Milton Friedman Do?

He would set the money supply growth at 5% on a systematic basis for three years and let the markets determine interest rates. If the US government wants to borrow what it spends and is less than the taxes it collects, interest will rise. If it has small deficits interest rates will fall. Price increases will be based on GDP growth less what prices increase which is approximately 1.5-to-2.5% over the compounded growth rate in three years.

The Fed is composed of a group of men and women who think they can set the price of the “cost of credit” and control the money supply for 340 million Americans. It can’t be done!

That is why Friedman said that ideally, he would prefer to "abolish the Federal Reserve and replace it with a computer."  He preferred a system that would increase the money supply at some fixed rate, and he thought that "leaving monetary and banking arrangements to the market would have produced a more satisfactory outcome than was actually achieved through government involvement.”

·        Stocks suffered a historic bout of selling pressure this past week.  Curmudgeon: That’s 100% due to the Fed’s abrupt change in rate hike policy (e.g., Powell said 75 bps was “off the table” in May, but rates were raised by that amount last Wednesday at the June FOMC meeting.  Fed Funds are forecast to be raised by that same amount (75 bps) at the July FOMC meeting.

·        The selling pushed almost all stocks into short-, medium-, and long-term downtrends.

·        Inflation may get a reprieve if some commodities follow through on seasonal trends. 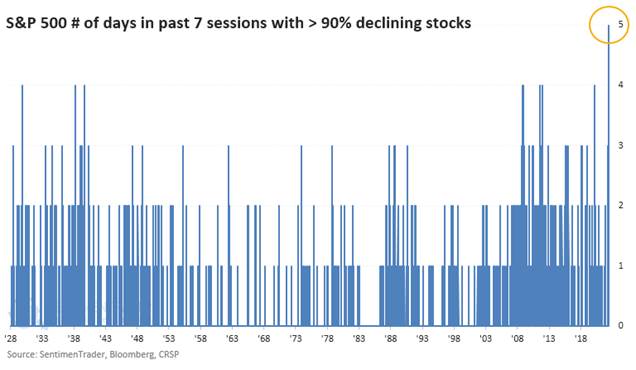 The table below shows the S&P 500 risk/reward skew over the next week to the next year.

The Curmudgeon and Victor are NOT the only Fed bashers! Among them is Larry Summers, a Harvard University professor, and former US Treasury Secretary.  He has criticized the Fed for failing to account for its mistakes and to realize the damage to its credibility after the June inflation report led the Fed to believe that larger rate hikes were needed (we disagree).

Summers said the US jobless rate would need to rise above 5% for a sustained period to curb inflation that’s running at the hottest pace in 41 years.

He said the central bank should move away from providing communication to the public about the likely future course of monetary policy.  “The return to humility, the abandonment of forward guidance as a policy tool is entirely appropriate,” Summers said.

What the Fed practices is Socialism.  They are the monopolists who control the cost of everything.

HL Mencken [2.] defined a Socialist as:  “A man suffering from an overwhelming conviction to believe what is not true.”

Note 2.  H. L. Mencken was a 20th century journalist and satirist famous for his literary and political commentary. The Baltimore author and editor was well known and respected from the 1920s to the late 1940s.