Would Be Philosopher King Topples Markets; What’s Next?

Plato was first to use the concept of a “Philosopher King” (around 375 BC) as a hypothetical ruler with political skill combined with philosophical knowledge.  He argued that Philosopher Kings should be rulers of a city – state.

From the Middle Ages onwards, Islamic and Jewish authors expanded on the theory, adapting it to suit their own conceptions of the perfect ruler.

Plato’s Kallipolis is a beautiful city where justice prevails. It is a just city where political rule depends on knowledge, which philosopher kings possess, and not power.

A philosopher is a “lover of wisdom” from the Greek thinker Pythagoras. That’s the exact opposite of Fed Chairman Jerome Powell as we’ve discussed many times, most recently in last week’s post: Welcome to the Greatest Show on Earth – Presented by Jerome Powell.

Let’s review what this would be Philosopher King (the Fed) has done to the markets, the costs of “demand destruction” and what’s likely to happen just before the November 8th U.S. mid-term elections.

In the last two weeks, beginning on June 9th, the Fed’s rate rising rhetoric managed to (temporarily) end the uptrend in commodities - the latest market to succumb to the force of the Fed’s recent “making you poorer” monetary policy.

This will of course make these “quasi-Kings” happy as finally they are making the prices of things people buy begin to decline. The money supply growth has also started to decrease. Big spending bills (like the Dem’s “Build Back Better”) have not become law, and so don’t have to be monetized by the Fed buying newly issued U.S. government debt to finance such programs.

Here is the general sequence of markets that have topped, beginning in late 2021, when Powell finally admitted inflation was not “transitory” and started to “talk the talk” of larger than expected Fed interest rate hikes:

Copper in a Bear Market:

Let’s zero-in on Dr. Copper -used in everything from electrical contracting and electronics to construction and is therefore a leading indicator of the health of the global economy.  Copper’s selloff accelerated last week:

Copper is now in a bear market, which has happened before each recession in the last 30 years.  That’s yet another indication that an economic downturn may be underway.

The Cost of Demand Destruction:

“If demand can move back down, then inflation could move to back along that path just as quickly as it went up,” Powell told the Senate Banking Committee Wednesday during his semi-annual testimony before Congress.

Of course, the stated goal of The Fed was to curtail inflation, but they never considered the COST of “Demand Destruction.”   It’s   $15.5 trillion or 60% of U.S. GDP!

Consider this chart from BCA Research via the Daily Shot:

Putting Out Fires or Adding Fuel to the Fire? 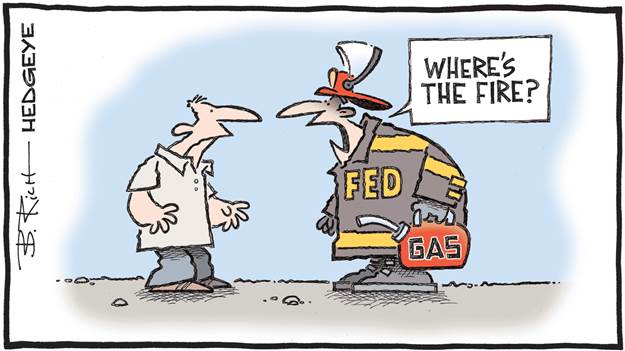 A commodity and financial futures index (without equities) that I created in 2004, named “the diversified trends index” or DTI by Standard & Poor’s is an intermediate trend following long/short index.  I met with the Curmudgeon in November 2005 in San Francisco, CA to discuss it and he subsequently bought a DTI based Rydex mutual fund and Wisdom Tree ETF for himself and his RIA managed account clients.

The DTI is now short everything except the U.S. dollar and the oil complex. That’s a telling sign trends have changed to BEARISH for almost all markets.

As we’ve previously stated in past Curmudgeon posts, we believe the Fed’s “reverse wealth effect” has pushed the U.S. and Europe into a recession (unofficially).  While hard to believe, I think the CPI will decline to a 4-to-5% level by election day - November 8th.  However, the November CPI won’t be reported by the BLS till December).

I believe the Fed will flip (announce it has ended rate increases) before the election to give the Democratic Party a chance to stop a Red Tsunami wave -as polls say will occur.  Note that President Biden’s average approval rating and consumer confidence are both at all time new lows, which does not augur well for the Dems in the mid-term elections.

However, if the Fed continues with its stated goal on interest rate increases this will turn out to be the worst recession in history.

We suggest you follow the CME Fed Funds Tool which currently forecasts an 83.8% probability of a 75 bps Fed Funds rate hike at the July FOMC meeting.

“We’re opening up a Pandora’s box. Be careful what you wish for.”  – James Waters