After President Biden signed an executive order banning Russian oil imports (~10% of U.S. oil consumption) on March 8th several important stock market lows were broken with volume increasing on consecutive days.  That confirmed a bear market in U.S. equities, which I thought would not occur this year. 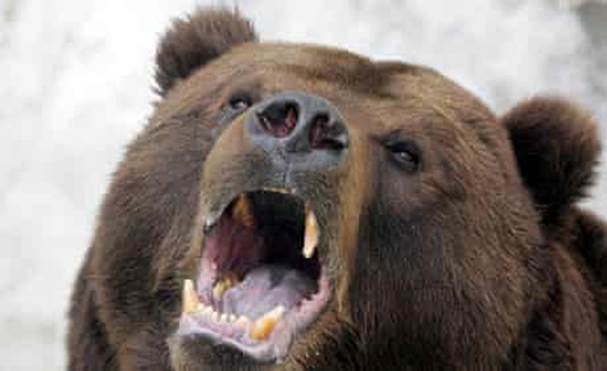 I beg to differ.  The Dow Theory does not have to confirm a bear market on the SAME DAY BUT IN STAGES. The Dow Transports broke their important December 1, 2021, lows in January 2022, which was unconfirmed by the Dow Industrials. This past Friday March 11th, the Industrials closed at 32,944.19, which was below their February 23, 2022, low of 33,131.76.  The IMPORTANT fact is that the S&P, NDX 100, Wilshire 5000, and Nasdaq composite ALL made lows on March 8, 2022 (based on critical fundamental changes in the world) is the significant feature confirming my bear market call.

The fact that the Dow Transports are in a “minor” rally is not significant at this time. The Russell 2000 did not make a new low either, but that also means nothing as that index has already established its downtrend.

The reading of Dow’s Theory is more an art of subjective judgement than objective perfection. I suggest reading Robert Rhea’s letters -every 10 days from 1932-to-1939 is the best education on Dow Theory.

My historical analysis of bear markets concludes that those which are “fundamentally caused” result in a recession.  The U.S. ban on Russian oil is the intermediate cause that changed the fundamentals.  World oil is priced at the margin so the U.S. sanctions on Russian oil (see cartoons below) have and will raise prices for global oil as there is less supply. Yes, Europe will continue to import Russian oil, but now the price will be higher.  That leaves less money for consumer discretionary spending.

Energy inflation, as depicted in the chart below, will cause price increases of most goods and services. 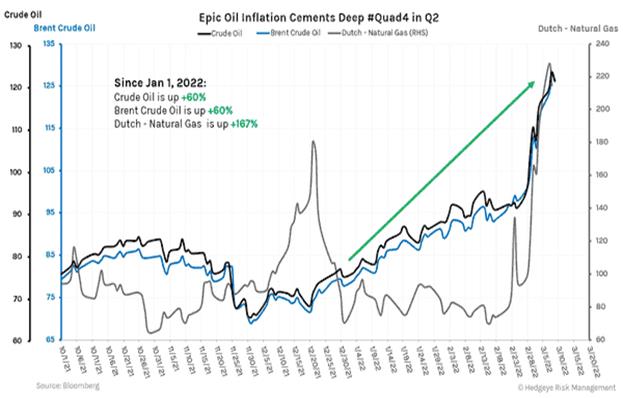 What’s Next for the Global Economy:

The CPI will increase into the teens, driven mainly by increasing energy prices that will continue to rise.  That leaves the consumer with much less discretionary spending for other goods and services.

The gap the U.S. must fill by buying oil on the open market will lift oil prices, thus increasing Russia reserves value and net worth.  Russia can also borrow against those increased reserves value and sell oil at a higher price in the future to repay the loans. They can make Europe buy oil in Rubles as Europe has no alternatives. China and Russia win- consumers lose!

China will buy Russian oil at a discount. They will sell part of their $1.1 Trillion of U.S. Treasury’s (with the dollar at recent highs) and paying only 1.5-2% interest.  Most of the proceeds might be used to buy Russian Rubles (now at their lows) paying over 20%.

McDonald’s suspended 850 franchises in Russia last week. If you are a dictator, what would you do as Russian people run those franchises?  NATIONALIZE THEM!

The same is true with other American corporations that want to stick it to Putin, but may hurt their shareholders? I believe such polices are like the shutdown of businesses by U.S. state governors and health officers during the Covid-19 pandemic which I previously wrote were like committing economic suicide! Please refer to Perspective on U.S. Economy and the Coronavirus – Suicide is NOT Painless!

Here are two cartoons which offer a light look at Russia sanctions: 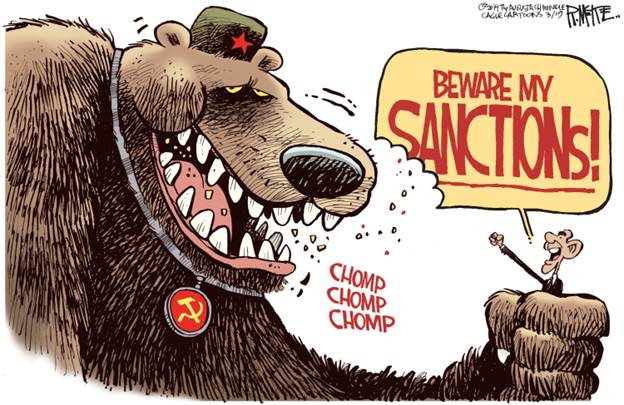 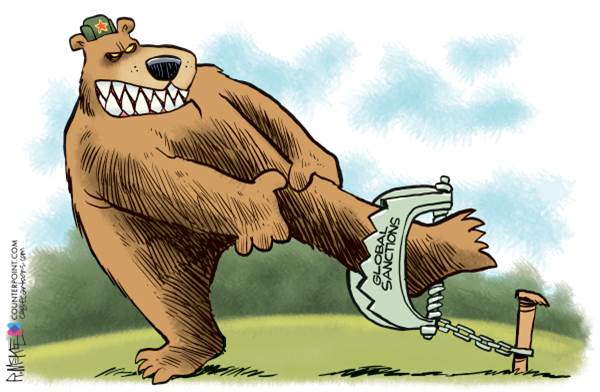 On Thursday March 17, 2022, the Fed will BEGIN to “FIGHT INFLATION” by raising the Fed Funds rate by 25 bps.  To every                    professional this is a joke!  The widely expected small rate rise is hardly a mystery as the Fed pre-announced it several weeks ago. What Fed Chair Powell will say about future rate increases will be what every savvy trader will be watching.

“We know that high inflation exacts a toll, particularly for those less able to meet the higher costs of essentials like food, housing, and transportation,” Powell said in prepared testimony that was made public Monday.

Duh?  We all know the problems inflation causes. The key question is what will the Fed do about it?

It’s obvious to me that the goal of the Fed is to retain the power they have by securing election victories of Senators that might confirm the appointments of Fed governors [1.].  That is what they care about most! The people are mere pawns.

Note 1. The Board of Governors is the governing body of the Federal Reserve System. It is run by seven members, or "Fed governors," who are nominated by the President of the United States and confirmed in their positions by the U.S. Senate.

Mohamed El-Erian on the Fed:

During an interview on Face the Nation, today (March 13, 2022), chief economic adviser to Allianz, Mohamed El-Erian discussed “the Fed’s ongoing train of policy mistakes regarding inflation.”

When asked what the Fed might do next, El-Erian replied: “Well, he (Fed Chair Jerome Powell) doesn't have an easy decision, as you said. Inflation is high and will go higher because of what's happening in Ukraine. And basically, he's got to make a choice, hit the brakes, regain credibility, but risk a recession or tap the brakes, and we have an inflation problem going into next year. We are here because the Fed is very late and has no good policy options available anymore.”

Asked where does the responsibility for this lie exactly?

EL-ERIAN: “It lies in the circumstances, it lies in the Fed being late, and mischaracterizing inflation. Until the end of November 2021, they were calling it transitory, but also to be fair to the administration, there- there will be a Putin inflation component. I estimate that at 7.9%, we will probably get very close or above 10% inflation before we come down. And that difference will be all because of the disruption that Putin's war implies for commodity prices, supply chains and shipments.”

Double digit inflation. When do you think we will see that?

EL-ERIAN: Yeah, if it happens, it will happen in the summer and people will feel it, the worst thing for us would be not only do we feel the higher inflation, but we also feel income losses. That's why it's critical to avoid a recession. We can't avoid stagflation–lower growth, higher prices, but we certainly can avoid a recession and we can bounce back quickly (but he never says how?).

This year the CBO hasn’t yet published a budget report. However, private forecasts say the U.S. federal government will spend $6.7 -$7 trillion which will create a $2.8 - $3 trillion budget deficit?  My guess is that the $3 trillion will be monetized by the Fed and banks, resulting in another huge increase in the money supply and inflation.

Important fact: EVERYTHING we do NEEDS energy. Any restriction on fossil fuels due to calls of climate change will raise prices.  Wind, solar, and batteries are a fraction of world energy usage.

The way to attack Russia is not to decrease the supply of oil and gas, but to increase it! That would lower prices and make Putin weaker. Higher energy prices make him stronger.

The left and globalist elite are attempting to overturn American capitalism. Until the people push back (like the Canadian truckers protesting pandemic restrictions), the U.S. and rest of the world will continue to lose its liberty and the abundance it creates.

That will decrease everyone’s standard of living. There is a constant war on liberty, which creates wealth.  The endgame appears to be some form of Marxism and Fascism.  As Klaus Schwab, head of the World Economic Forum put it “You will own nothing and be happy.”  Do you find that hard to believe?

We highly recommend this YouTube video clip to learn more….

“The individual is handicapped by coming face-to-face with a conspiracy so monstrous he cannot believe it exists. The American mind simply has not come to a realization of the evil which has been introduced into our midst. It rejects even the assumption that human creatures could espouse a philosophy which must ultimately destroy all that is good and decent.