We examine the massive increase in new stock issuance as well as the explosion in VC backed start-ups and unicorns (private companies valued at $1 Billion or more) with astronomical valuations.  In the past, this would be a red flag or dire warning because the new supply of equity would overwhelm the demand.  But as we’ve said so many times: this time is different.  Or is it?

New equity offerings have soared in recent months. The number of IPOs is going through the roof, as are secondary stock offerings.  One must go all the way back to 2000 to get anything close to what we are seeing today in this space. 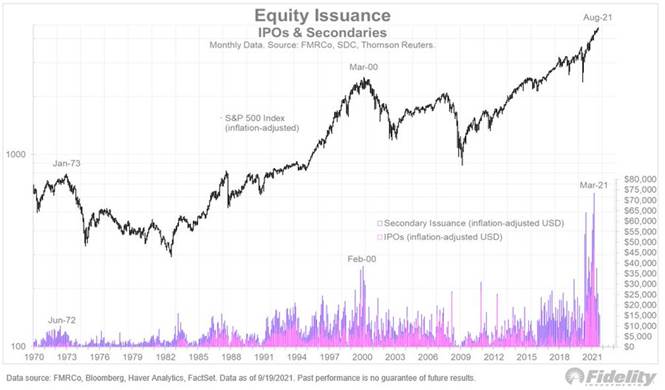 The Curmudgeon wrote about IPO extravaganza last December: Will Another Huge IPO Bubble Lead to Another Huge Crash?  It's only got worse since then.  However, the new supply of stock has been easily absorbed via the Fed induced "free money party" which flows into stock and bond markets.

VC markets are flush with cash, largely due to the Fed’s largesse.  In Q2 - 2021, funding to startups shattered past records, reaching $156B — an astonishing 157% increase year-over-year. [Source: CBINSIGHTS]

Furthermore, the number of unicorns is increasing exponentially.  And they’re being assessed at higher and higher valuations. In the 2nd Quarter, 136 new unicorns were birthed globally — nearly 6x (or 600%) the 23 unicorns born a year ago in Q2 -2020, and already higher than the 128 unicorns created in all of 2020. 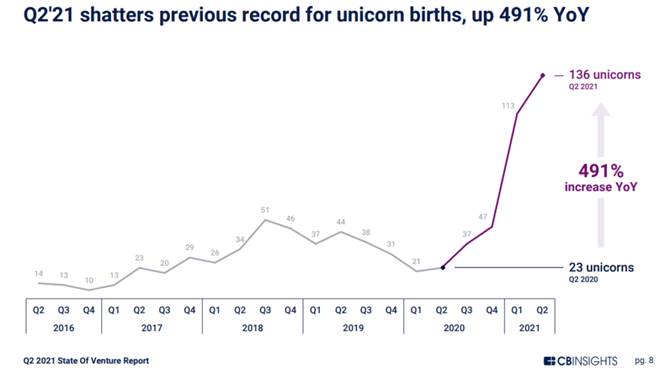 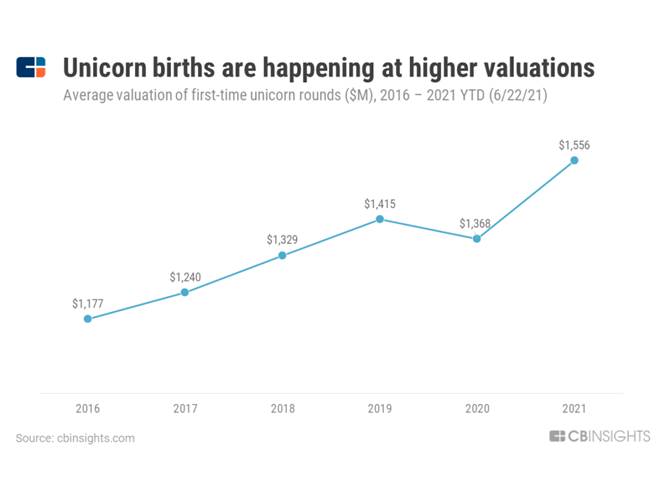 CBINSIGHTS says the global unicorn club is bigger than it's ever been, with 800+ private companies topping $1B valuations.  The total count of unicorns has already jumped 48% from 2020 year-end to 2021 year-to-date, with 354 current unicorns reaching their $1B+ valuation this year alone.  At this rate, CBINSIGHTS forecasts the world’s unicorn count will be above 1,000 in 2022.

Over 4% of Billion+ dollar companies have reached decacorn (>= $10B) status. While the majority of unicorns are valued in the $1B – $5B range, there are currently 37 companies with valuations between $10B and $100B.

Half of the world’s unicorns are based in the U.S., with China taking second place at 19%. Of current unicorns minted in 2021, 30 are based in China. This is depicted in the following charts:

The top 10 unicorn investors, based on the total number of current

unicorns they’ve invested in, are:

U.S. based Tiger Global Management has the most current unicorn companies in its portfolio, with more than 120 current unicorns backed. Japan-based SoftBank Group comes in second place, backing 77 unicorns, followed by Coatue Management, with 61. Over 350 institutional investors boast at least 5 unicorns in their portfolios.

With massive stock inflows from retail investors and companies continuing to buy back shares, the new IPOs and secondaries have been easily absorbed.

Companies in the S&P 500 spent nearly $199 billion on share repurchases in this year’s second quarter, according to data released Thursday by S&P Dow Jones Indices. That figure is up nearly 12% from the first quarter’s total and 124% from the pandemic-era low set in 2020’s second quarter.

Low interest rates and high public stock prices have contributed to a resurgence of VC backed funds that invest in start-ups.

What Could Go Wrong?

Is there anything that might curtail the demand for stocks and private companies?  It certainly won’t be the timid Fed taper that’s expected by the end of 2021. Inflation doesn’t seem to be a worry (for now), nor does a U.S. or China economic slowdown seem to be a cause for concern.

Valuations have been sky-high for years, but that didn’t stop massive stock inflows this year.  U.S. stocks that are most correlated to bonds are 30% more expensive than the market overall, Sanford Bernstein’s quant team said.  “This poses a major risk for portfolio managers,” strategists led by Sarah McCarthy wrote in a note to clients. 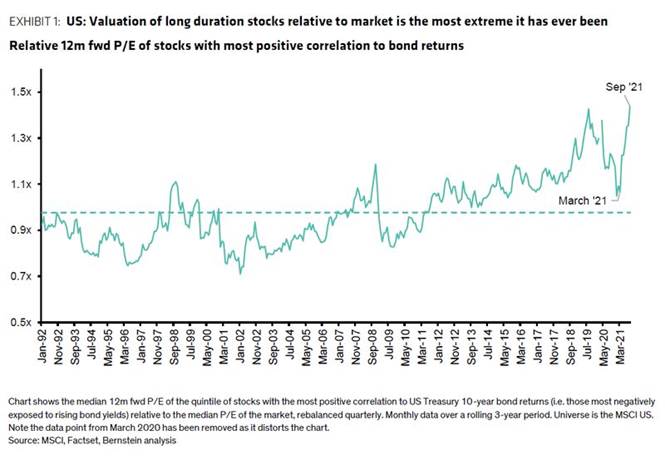 Meanwhile, the dippers had voracious appetites this week.  Retail investors were buying the dip in some of their favorite names as big tech stocks took a beating Monday and Tuesday in a global selloff spurred by the debt crisis at China Evergrande Group. That didn’t deter the dippers.  As the S&P 500 experienced its biggest drop since May, individual investors snapped up north of $3 billion in equities Monday and Tuesday, according to Vanda Research.

Victor has repeatedly stated that an unexpected negative event (or shock) which the Fed could not control would end the bull market in financial assets.  His piece this week, “A Potential Petrodollar Shock with a Huge Impact on Markets,” depicts a scenario where the Saudi’s might replace the U.S. dollar as the currency used to price oil.  That would cause a dollar crash and limit down moves in many financial markets.

Nouriel Roubini has repeatedly warned of a stagflation inspired debt crisis and persistently above Fed target inflation.  In his latest blog post, the esteemed economist expects “a full stagflation with much lower (economic) growth and higher inflation.”  Furthermore, he states, “The temptation to reduce the real value of large nominal fixed-rate debt ratios would lead central banks to accommodate inflation, rather than fight it and risk an economic and market crash.”

“There are plenty of indicators that inflation may be more widespread and persistent than many originally anticipated…. Stocks which are long duration, expensive and crowded are most at risk from an inflection in inflation expectations.”

“The Panglossian scenario that is currently priced into financial markets may eventually turn out to be a pipe dream. Rather than fixating on Goldilocks, economic observers should remember Cassandra, whose warnings were ignored until it was too late.”