How Will the Fed and ECB Cope with Stagflation?

“If it is not transitory, and I hope it is, then the weed of inflation grows and kills the garden.”   Richard Fisher, Former President and CEO, the Federal Reserve Bank of Dallas

The prospect that inflation’s recent spike may be more than transitory, coupled with the possibility the economy will grow slowly, has raised the specter of “stagflation.”

This article examines the case for persistent stagflation in the U.S. and Europe.  We also suggest it could get much worse if global central banks maintain their ultra-easy monetary policies.

The 1970s were characterized by low economic growth combined with higher inflation, commonly known as “stagflation.”  According to Edward McQuarrie, a professor at Santa Clara University’s Leavey School of Business, stagflation in the U.S. was from 1966 through 1982. “The mid-1960s are when the inflation that we associate with the 1970s actually began, and the ills we associate with the 1970s didn’t end until 1982,” he says. 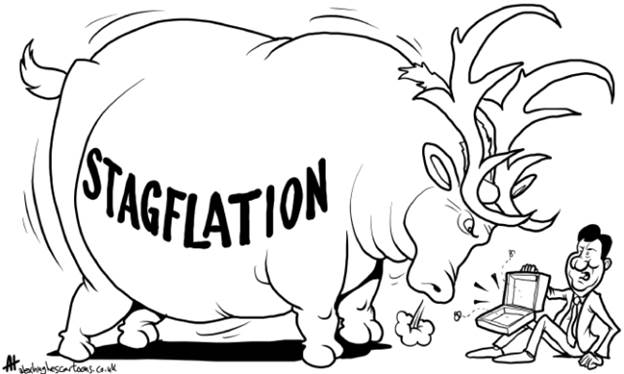 The current mix of persistently loose monetary, credit, and fiscal policies has led to inflation accelerating.  At the same time, concern over the Delta variant has precipitously slowed the U.S. economy.  For example, Friday’s jobs report had many fewer jobs added than expected while wages rose across the board (see Peter Boockvar’s comments below).

Also, Federal unemployment benefit programs under the CARES Act ended on September 4, 2021, which will decrease aggregate demand for many consumers.  Don’t forget that consumer spending makes up about 70% of U.S. GDP.

The Conference Board’s Consumer Confidence Index declined to 113.8 (1985=100) in August, down from 125.1 in July.  The Expectations Index—based on consumers’ short-term outlook for income, business, and labor market conditions—fell to 91.4 from 103.8.

“Consumer confidence retreated in August to its lowest level since February 2021 (95.2),” said Lynn Franco, Senior Director of Economic Indicators at The Conference Board. “Concerns about the Delta variant—and, to a lesser degree, rising gas and food prices—resulted in a less favorable view of current economic conditions and short-term growth prospects. Spending intentions for homes, autos, and major appliances all cooled somewhat; however, the percentage of consumers intending to take a vacation in the next six months continued to climb. While the resurgence of COVID-19 and inflation concerns have dampened confidence, it is too soon to conclude this decline will result in consumers significantly curtailing their spending in the months ahead.” 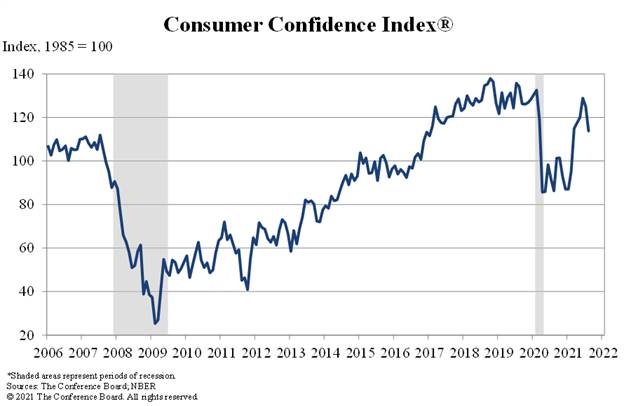 In a report last week, BofA strategists said the latest evidence suggests inflation will not be transitory and there are stagflation risks that could complicate the Fed’s normalization of interest rates.

Investors have swept into assets perceived to perform well on slowing growth and rising inflation, with tech stocks seeing their biggest inflows in six months and large outflows from U.S. government debt.  At $2.5 billion, tech stocks saw the biggest inflows since March 2021, while outflows from U.S. Treasuries rose to $1.3 billion for the week – their highest since February 2021 - as "stagflation" trades gathered momentum.

The chart below looks at the global economy, including the U.S. and Eurozone, showing “inflation surprises have moved well above overall data surprises.” That’s particularly so in the U.S., according to the BoA report. 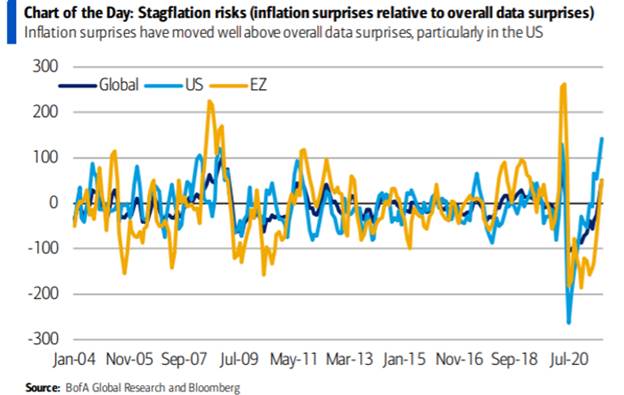 “The risk is increasing that Covid, as a negative and more persistent supply shock, leads to stagflation, in turn making Fed policy normalization challenging,” the strategists wrote. “The market does not appear to be too concerned about Covid and inflation risks.”

The bank sums it up somewhat cryptically (emphasis added):

Monti said that economies, not only in the EU, could start to experience elements of “stagflation” similar to that seen in many countries in the 1970s.  Therefore, it will be “very important to manage wisely and in a coordinated manner this transition from a needed abundance of monetary and financial support to a more ordinary situation.”

After Friday’s disappointing jobs report, it seems the Fed will defer tapering and maintain its accommodating, easy monetary policy (“free money party”) for longer than it should.  Of course, that risks ever higher inflation (i.e., it is not likely to be “transitory”).

As we’ve stated many times, each Fed chairperson seems to be more dovish than the previous one.  That’s depicted below: 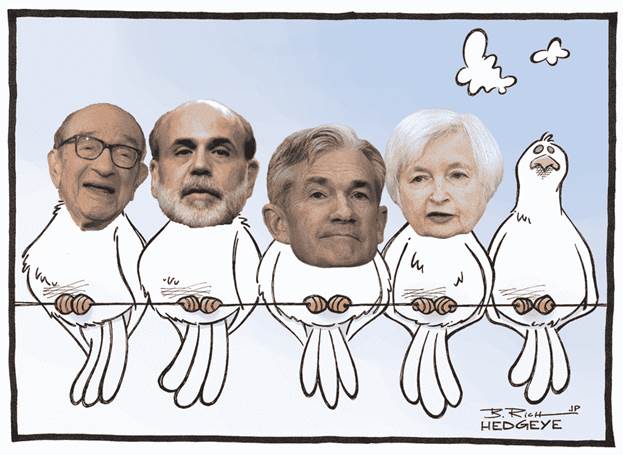 If inflation stays higher than targeted and the Fed tapers QE too soon it could cause bond, credit, and stock markets to crash. That would subject the economy to a hard landing, potentially forcing the Fed to reverse itself and resume QE.  Of course, the Fed has done that before, but the next downturn would be bigger and much more threatening.

Fiscal policies are also likely to remain loose, judging by the Biden administration’s $3.5 trillion infrastructure plan.  Also, the likelihood that weak Eurozone economies will run large fiscal deficits through 2022 while the inflation is accelerating (Euro-area inflation was 3% YoY in August, up from 2.2% in July and a 10 year high).

One defining characteristic of the 1970s was cost-push inflation, when wages—employers’ biggest cost—and overall consumer prices chased each other higher, says Peter Boockvar, chief investment officer at Bleakley Advisory Group. “We are beginning to see tinders of a wage-price spiral,” he says, pointing to a 0.6% rise in average hourly earnings from July, a 4.3% increase in wages from a year earlier, and comments on Thursday from the National Federation of Independent Business (NFIB) report on small businesses.

50% of small business owners reported unfilled job openings in August on a seasonally adjusted basis). August's reading is 28 percentage points higher than the 48-year average of 22%.

“Small employers are struggling to fill open positions and find qualified workers resulting in record high levels of owners raising compensation.  Owners are raising compensation in an attempt to attract workers and these costs are being passed on to consumers through price hikes for goods and services, creating inflation pressures,” NFIB chief economist Bill Dunkelberg said in a statement.

Nouriel Roubini argues that persistent negative supply shocks threaten to reduce potential growth, while the continuation of loose monetary and fiscal policies could trigger a de-anchoring of inflation expectations. The resulting wage-price spiral would then usher in a medium-term stagflationary environment worse than the 1970s – when the debt-to-GDP ratios were lower than they are now. That is why the risk of a stagflation inspired debt crisis will continue to loom over the medium term.

How will the Fed and ECB respond if the markets suffer a shock (or meltdown) amid a slowing economy and higher inflation?

“As I watch the asset bubbles get bigger and bigger, I can't help but think of Alan Greenspan's parting words before he left the Fed: ‘History has not dealt kindly with the aftermath of protracted periods of low-risk premiums.’”