A Historical Look at Inflation; Fed Delay is Cause for Concern

With the outsize 5% inflation (CPI) print on Thursday, one would’ve expected a huge decline in U.S. Treasury note and bond prices.  Instead, they rallied strongly, with the 10-year yield closing at 1.45% or a negative real yield of -3.55%.  Either the fixed income markets are totally manipulated OR the markets have bought into the Fed’s “transitory” inflationary rhetoric.

We examine that belief, which we think is misguided, in this post. Also included is a U.S. economic study Victor has done during time periods before and after the Fed was created. Please pay particular attention to the inflation findings.

At 5% Year over Year (YoY), surging May 2021 annual consumer price inflation continued to top expectations, according to the BLS.  That was the largest 12-month increase since a 5.4% increase for the period ending in August 2008.  For the month, the CPI increased 0.8% on a not seasonally adjusted basis.

The continuing inflation pickup reflected more than just a relative surge against year-ago collapsed gasoline prices.  “Core” Inflation (net of food and energy) rose 0.7% in May, while its YoY increase of 3.8% is at a new 29 year high (since June 1992).  Of course, these numbers are subject to revisions.

Today, after decades of below 2% U.S. inflation, many Americans have little idea what it looks like. Nearly half of the U.S. population was born after 1981, the last year of double-digit consumer price increases.  However, your two authors are in their mid-70s so very well remember the accelerating inflation of the mid 1970s through 1981.  This chart tells it all:

Indeed, unrelenting inflation sent the U.S. economy into a “wage-price spiral” in the 1970s. Workers demanded pay increases to keep up with the rising cost of living. Many of them got raises through cost-of-living adjustments in union contracts. To keep up with rising costs, in turn, businesses raised prices even more.  That was in contrast to “cost-push” inflation which seems to be the more likely trigger now.

Preventing the spread of inflation could involve some economic pain as it did after Paul Volcker became Fed Chair in 1979.  Volcker’s fight against inflation included restricting the growth of the money supply, leading to sharply higher interest rates which eventually broke the back of inflation after a “double dip” recession from 1980-1982.

·       Financial-market speculation and exuberance is stronger and broader than during the dot-com boom from 1998-2000.  For example, Sentiment Trader’s Dumb Money Confidence index at 0.72 is extremely optimistic, while their Smart Money Confidence is neutral.

·       The Fed continues to buy $120B of bonds/mortgages each month and has not sold the corporate bonds or junk bond ETFs it bought last year.

Fed Response: Too Little Too Late:

“The problem is when policy makers are too slow to respond to their mistakes,” said Stephen Cecchetti, a Brandeis University economics professor who worked in the White House Council of Economic Advisers in 1979-80.

The Fed says it has the tools to stop an inflationary surge, but its new regime of “average inflation targeting,” (announced last August) suggests a tardy response.  As we wrote in this Curmudgeon post analyzing the Fed’s new monetary policy:

The U.S. central bank will be more inclined to allow inflation to run higher than the standard 2% target before hiking interest rates, especially if inflation had previously been below 2% for an extended period of time.   The revised Fed statement says that "following periods when inflation has been running persistently below 2%, appropriate monetary policy will likely aim to achieve inflation moderately above 2% for some time."

Late by design, the Fed would have to tighten monetary policy significantly more to stop an inflationary surge.  Does anyone think Jay Powell and company have the guts to do that?

Since the onset of the pandemic last February, the Fed has bought 56% of total Treasury issuance of $4.5 trillion. The Fed’s asset purchases represent 76% of the cumulative federal fiscal deficit. And the Biden administration is proposing a $6 trillion budget for fiscal 2022, about a third of which would be unfunded.

The Fed says it’s still too early to slow its purchases of Treasury's and agency-backed housing debt. If the Fed doesn’t begin action imminently, it may be too late. Others will fund the nation’s profligacy even after economic growth slows and the debt burden grows. But what interest rate investors will demand for the privilege?

Most large foreign buyers, including China, departed the Treasury auction market when the pandemic hit and haven’t meaningfully returned. Many foreign entities believe the Fed is monetizing the fiscal expansion and expect the new policy experiment to end badly. Leaders in China are poised to capitalize on an American policy error.

The Fed should change its policy regime. It should stop buying mortgage securities immediately. Soon after, it should slow its purchases of Treasury debt. It should not tolerate Fed-financed fiscal expansion. It should unlock the handcuffs imposed by its novel doctrine and render an informed and humble judgment on the state of the economy and the attendant risks to the outlook.

This cartoon, courtesy of the Wall Street Journal captures the thrust of Mr. Warsh’s opinion piece. 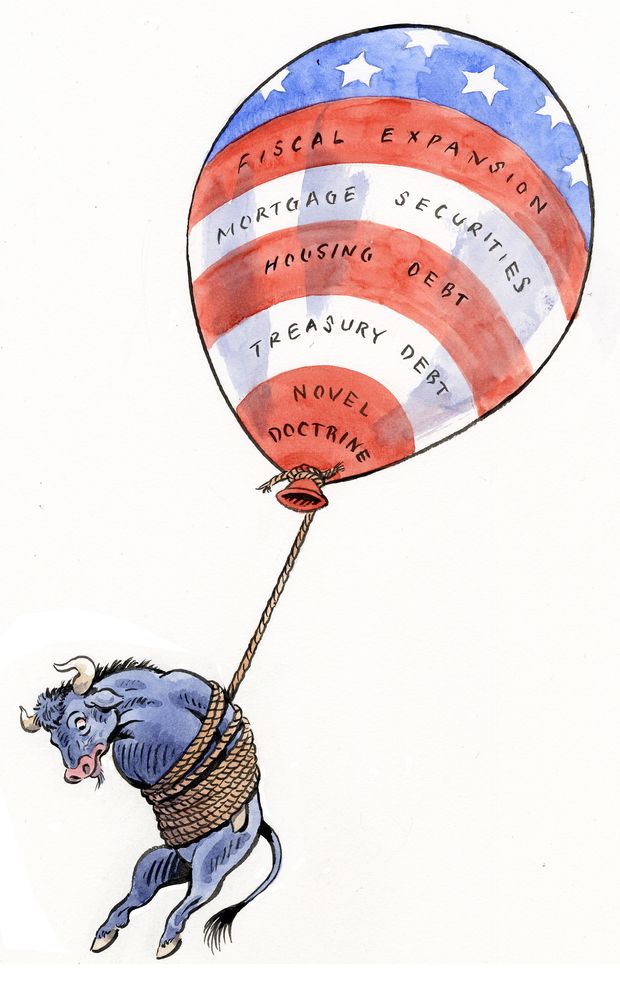 Victor’s Study of U.S. Economy Before and after the Fed was Created:

For a historical view of the Fed’s influence on the U.S. economy, let’s examine the duration of recoveries (and lack of recessions) and comparing that to the extent of price increases (which the Fed is directly responsible for by expanding the money supply).

Using the classifications of recessions and recoveries developed by the National Bureau of Economic Research (NBER), who has measured and recorded every U.S. business cycle since 1854, we get the following results:

·       Using gold as a measuring stick (as the Gold Standard was in effect during that time period), inflation was about 7.2% overall during this period or an annual rate of 0.12%.

Using the data supplied by the Bureau of Labor Statistics, total inflation was 18% during this period, or an annual rate of 0.28%.   Using either source, prices as a whole were incredibly stable during that time period.

Compare that to the following time period, during which the Fed was in operation and had full control of the U.S. money supply.  From January 1914 through February 2020, the economy experienced 261 months of recession and 1,012 months of recovery.  That’s 21% of the time in declining economic growth, and 79% of the time in expanding growth.

Certainly, the Fed has been a huge winner, greatly increasing the amount of time spent in recovery.  Assuming economic results would have been equal in both periods if the Federal Reserve didn’t exist, the U.S. has experienced an extra 26.7 years of expanding economies (320 months) as a result of their actions.

Now let us measure the offsetting cost of that benefit: price increases.  Over the same 1914 to February 2020 period, the admittedly understated CPI has gone from 10.00 to 258.678.  (we’re ending in February 2020 because the NBER has not yet listed an official end date of the recession that began that month).

I leave it to our readers, to decide if the trade-off was worth it.  Render your own verdict and email the Curmudgeon (ajwdct@gmail.com) with your comments.

As we’ve stated in recent Curmudgeon posts (here and here), U.S. money supply has dramatically increased at more than 20% year-over-year recently.  Therefore, the Fed’s suggestion that inflation is transitory cannot be true.  Although price increases may slow a bit, in July they will begin to surge again.  One reason rarely talked about is the hoarding of the existing supply of goods.  Modern Monetary Theory (MMT) does not account for such practices.  Nor does it consider the lack of investing in production that will also cause prices to rise.  Most people don’t “invest” in inflationary environments. Instead, they speculate on prices.  This is why you see so many businesses buying back their own shares in recent months, rather than building new manufacturing facilities.

Once the inflation cat is out of the bag, an inflationary psychology usually emerges that causes inflation to accelerate unless the Fed (e.g., Paul Volker) or a deflationary shock (e.g., huge debt defaults) breaks it.

Optimism about the future should be tempered by memories of the past, in this case the late 1970s-early 1980s when inflation accelerated.  The Fed has painted itself in a corner with its “wait and see” monetary policy which will delay any measures to fight inflation if it persists.

“In the full enjoyment of the gifts of Heaven and the fruits of superior industry, economy, and virtue, every man is equally entitled to protection by law; but when the laws undertake to add to these natural and just advantages artificial distinctions, to grant titles, gratuities, and exclusive privileges, to make the rich richer and the potent more powerful, the humble members of society the farmers, mechanics, and laborers who have neither the time nor the means of securing like favors to themselves, have a right to complain of the injustice of their Government.

There are no necessary evils in government. Its evils exist only in its abuses.”