Inflation and Debt are Systemic Threats to the U.S. Dollar

In the first sentence of a recent Curmudgeon post we wrote, “Inflation is indeed a worry that the Fed continues to ignore.” That was followed by this comment: “Inflation is baked into the 24% increase in money supply, which will continue to rise with the Fed’s financing U.S. government debt with no tapering of QE in the near future.”

We expand on that theme in this article and explain the effect it might have on the U.S. dollar as the world’s reserve currency.

Therefore, the Fed’s suggestion that inflation is “transitory” cannot be true as long as it maintains its QE/ZIRP monetary policy.

Although price increases may slow a bit in July, they will likely reoccur again shortly thereafter. The reason (rarely talked about) is the hoarding of the existing supply of goods. That is something that the proponents of Modern Monetary Theory (MMT) do not understand.

The lack of investing in productive assets will also contribute to a rise in prices.  Companies are often reluctant to “invest” in inflationary environments, as no one knows how high prices will rise to be able to sell their manufactured product(s) at a profit. But companies do speculate on prices. This is why you see them buying back their shares, rather than building manufacturing facilities. Inflation (courtesy of money printing; aka “keystroke entries”) will continue to increase until money supply growth stabilizes in the 6% range.

CPI and PPI at Multi-Year Highs:

·       Nearly all major component indexes increased in April. Along with the index for used cars and trucks, the indexes for shelter, airline fares, recreation, motor vehicle insurance, and household furnishings and operations were among the indexes with a large impact on the overall increase.

·       The index for all items less food and energy (core CPI) rose 0.9% in April, its largest monthly increase since April 1982. Nearly all major component indexes increased in April.

·       On an unadjusted basis, the final demand index moved up 6.2% for the 12 months ended in April, the largest advance since 12-month data were first calculated in November 2010.

Commodities are still an important driver of rising prices, despite the U.S. becoming more of a “service economy.”  Oil, copper, lumber, cement, etc. all go into making new houses which are an important part of inflation indexes.

It may be interesting to see how an actual commodity index did going back to 1985.  The Commodity Trends Indicator (CTI) was created by Alpha Financial Technologies LLC (AFT) – a firm I control.  That index was branded by S&P in 2004. It traded on the NYSE as an ETN for a time, which was sponsored by HSBC.

Of course, the CTI will fluctuate, and could turn down. But as a guide to the reality of commodity prices so far this year (versus what the BLS is reporting) may be of interest to readers.

The ramifications from the current U.S. monetary and fiscal policies are varied and often misunderstood. I believe the world sees the U.S. in decline with self-made problems.

“The Duran,” an objective geopolitical analytical service is very knowledgeable about international affairs.  It’s run by Alexander Mercouris (a former MP of English Parliament who lives in the UK) and Alex Christoforou (an American who lives in Greece).  They recently did a podcast titled “Russia Dumps U.S. Dollar. Fed Printing Out of Control.” The subhead is: “Russia’s $186 Billion Sovereign Wealth Fund Dumps All Dollar Assets.”

The upshot of that podcast is that nations see the U.S. as losing control of their money supply because of too much money printing and spending.  And that is causing price increases that cannot be stopped without causing a recession or depression.  They mention Russia dumping dollar assets along with China and predict other nations will follow suit.

According to the Duran “the de-dollarization of America is the biggest story of our lifetimes.”  This is coupled with the “end of the rule of law,” the destruction of U.S. institutions and elections.”

Permit me to add the promotion of chaos and defunding of police (an unheard-of tactic), which is causing the loss of confidence in the U.S. all around the world.

U.S. Fiscal Policy and Debt as threats to U.S. Dollar:

President Biden is attempting to restructure America and to create an economic boom so that Democrats win the 2022 mid-term elections.  Yet he doesn’t seem to realize that out of control money printing and debt (now at 130% debt to GDP ratio) are systemic threats to the U.S. dollar.

A proposed $6 trillion dollar budget for fiscal 2022, was not in the CBO projections till fiscal 2027. That is five years ahead of schedule from September 2021!

Highlights of Bill Gross’ Op-Ed in the Financial Times:

Here are a few excerpts of Bill Gross’ FT article titled “The real bond kings and queens sit on the Federal Reserve throne.”

Even enthusiasts of the Fed’s policy must wonder whether hundreds of cryptocurrencies or a boom in special purpose acquisition vehicles are the result of continuing financial innovation or the product of cheap and plentiful credit demanded by deficit spending and an accommodating Fed chair.

Five-year US Treasuries currently yield just 0.80%, not much in a world where inflation expectations over the same period are above 2.5%. That is reflected in the negative real yields, which have the effects of inflation stripped out. Five-year US inflation protected bonds now trade at a yield close to minus 2 per cent.

And how long can the Treasury continue to require near-costless Fed financing for $2tn, $3tn and $4tn deficits without sinking the dollar? In a historical gold-standard world, Fort Knox would have been emptied long ago, implying the bankruptcy of the world’s reserve currency. 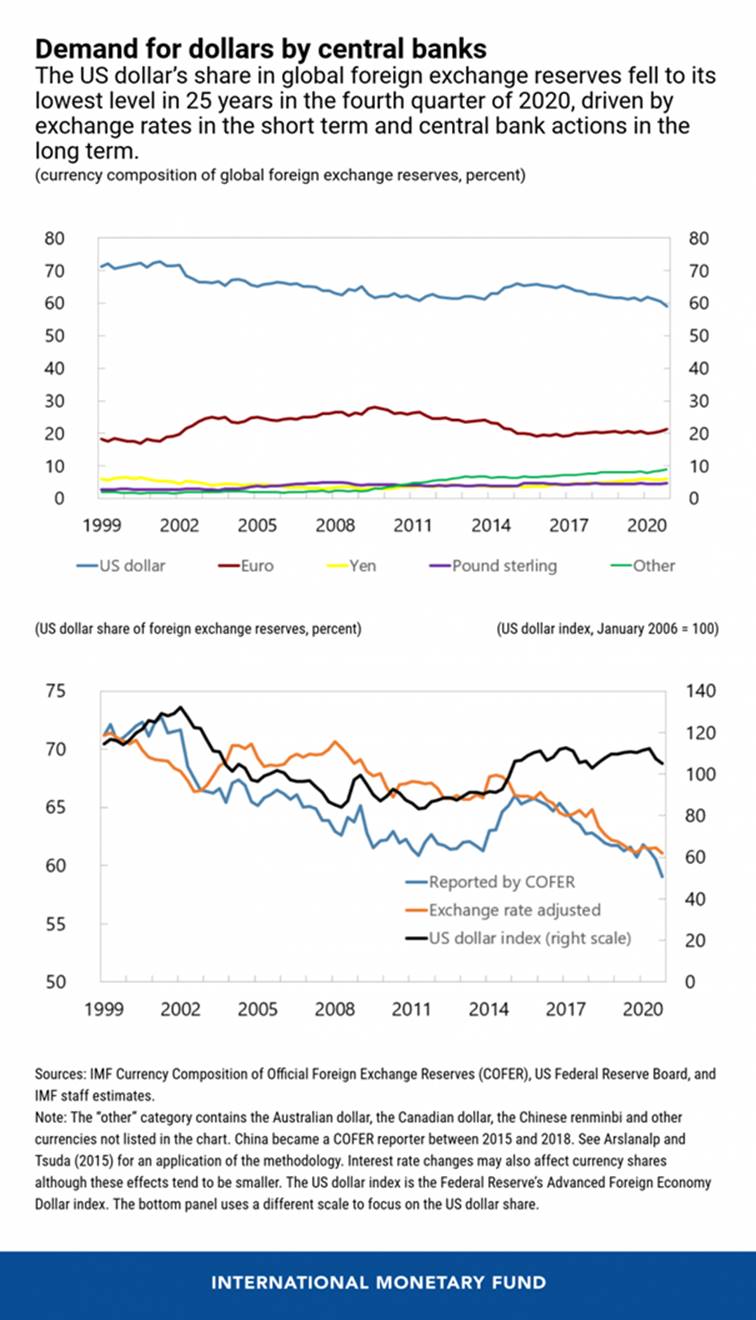 The IMF’s latest survey of official foreign exchange reserves shows that the share of U.S. dollar reserves held by foreign central banks fell to 59% during the 4th Quarter of 2020 — its lowest level in 25 years (see chart above). This compares with a 71% share when the euro was launched in 1999.

Some analysts say this partly reflects the declining role of the U.S. dollar in the global economy, in the face of competition from other currencies used by central banks for international transactions. If the shifts in central bank reserves are large enough, they can affect currency and bond markets.

Indeed, the latest IMF numbers confirm that the dollar’s world reserve currency privilege is eroding as countries that trade with and borrow from the euro area increasingly seek to hold euro reserves rather than dollars. That process is now also happening with China and the renminbi.

Former U.S. Treasury Secretary Larry Summers (a Democrat) has said the Biden administration is pursuing “the least responsible fiscal macroeconomic policy we’ve have had for the last 40 years.”  In an interview with the FT, Summers implied that the anti-inflationary credibility started by Paul Volker 40 years ago may now be in question, causing foreign investors to worry that the U.S. will inflate away the value of their Treasury holdings.

Who would have thought that buying mortgages would lead to a bizarre surge in house prices?

In law, “insanity” is defined as: “unsoundness of mind or lack of the ability to understand that prevents one from having the mental capacity required by law to enter into a particular relationship, status, or transaction or that releases one from criminal or civil responsibility.”

By that definition, do you think our U.S. government and Fed leaders are insane?

A friend once told me that if you see an elderly person with crumbs in their lap and taking short steps to walk, don’t ask them “How are you doing?”  Does this mirror the overall state of decline in the U.S. today?

If the dollar gets sold down to the low 80’s on the U.S. Dollar index (it’s currently 90.12 in the June 2021 DXY Futures contract), expect consumer and commodity prices to rise into the mid-teens.  However, that will probably not be reflected in the CPI (which we’ve often stated is not an accurate reflection of U.S. consumer price changes).

As long as U.S. debt and dollar creation continue unabated, foreigners are likely to lose confidence in the greenback.  That begs this important question: When will U.S. dollar dominance suddenly turn into a dollar rout?

“The Fed has now outpaced foreigners in terms of market share in the U.S. Treasury market, which could clearly be seen as a negative for the USD reserve status. If the Fed crowds out investors in the bond market, the USD will turn less relevant to hold in an FX reserve. It is as simple as that.”

Stay safe, be healthy, take care of yourself and each other, and till next time……