Portraits of Some
Bulls of the Millennium
By Miki 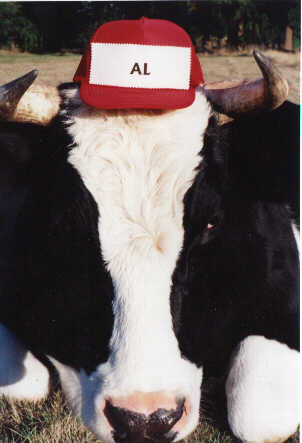 William McChesney Who? Al never heard of this bull party pooper. Why stop the party when everyone is having such a good time? Al thinks that Willy Whatever guy must have been unusually cruel (probably even a butcher). Just keep filling the watering trough to the brim and then some. Lets all have fun now! Eventually, we are all hamburger.

Many have called Al a party animal, but this is the first photographic proof. His favorite party date among the female stock is none other than Dottie Com. Al is so blindly in love with Dottie, he cant see beyond her heavy makeup. Compared to Dottie, all the other girls are Amazons.

To inspire other bulls Al wears a red hat, a bulls favorite color. One of Als favorite things is to lock horns with bigwig bulls. In fact, the bigwigs have given him temporary membership in Chez Cronies, an exclusive club for important bulls. Als job is to make sure the pastures stay green and well-watered so the members have plenty to munch on. And thats why Als Chez Cronies bull friends are well fed. They dont call Al "The Chairman of the Fed" for nothin.

While Al enjoys partying, from time to time he must make some serious looking appearances, sometimes even pretending to be on the horns of a dilemma. Here his real talents are displayed. Al is excellent at fake out moves  making one think he is charging ahead in one direction when he is really doing something entirely different. So far, Al has mastered this maneuver only one way. That is, charging ahead looking very threatening and then easing up at the last moment or much, much earlier. Al is also extremely adept at chewing cud on both sides of his mouth. The Chez Cronies bulls allow Al to do this. After all, chewing cud doesnt mean much, its his actions that count. Younger bulls are indeed amazed by these performances, digesting every morsel, and view Al as a demigod.

Al may well be the most idolized bovine since the golden calf of biblical times. Al seems to have forgotten that someone named Moses came to lay down the law back then. But that was an old era. Hey! This is a new era! The old laws dont apply! Bull worship is OK! Isnt it? 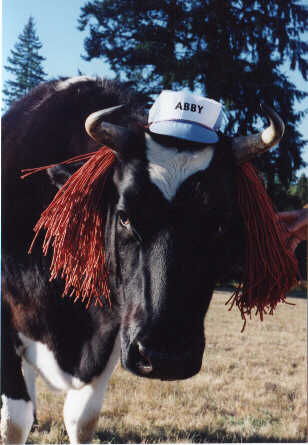 You've heard of A Boy Named Sue?  How about A Girl Named Joseph?  Nobody said being a girl bull was easy but someone's got to do it and that someone is Abby Joseph.  What more fitting name for a girl bull?  Abby's job is to cheer on the thundering herd.  Of course, with Al's blessing.  Here is Abby's favorite, now classic, cheer...

Abby's stockyard (which feeds a lot of bulls) issues this disclaimer - "Any subtle reference in this cheer which questions the intelligence of our clients is, of course, purely accidental." 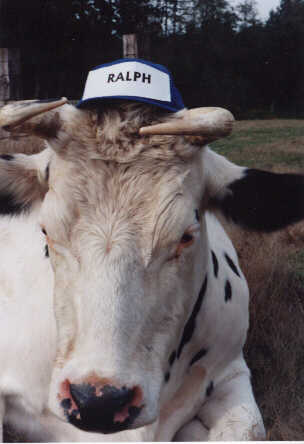 Ralph - The Bull Who Is Never Wrong

When Ralph was a tiny baby bull, the very first word he learned was not "Mama" or "Dada", it was "up".  When Ralph grew a little older, he learned to look behind him and discovered a four-letter word, "down".  So to figure where he was going, Ralph always looked back first to check if things were "up" or things were "down".  Then, one day, he found that moving forward while looking behind, a bull can fall flat on his face.  This was most embarrassing to Ralph.  When Ralph became a grownup bull and more prudential in his ways, he grew horns - one pointing "up" and one pointing "down".  Now Ralph always knows which way things are going.  The answer is on the top of his head.

[Return to the Fiend's SuperBear Page]