“The Lord Giveth and the Lord Taketh Away”

Source: The Title phrase of this article has its origins in Job 1:21 of the King James Version of the Bible.

For the purposes of this article, the “Lord” is the head of U.S. financial markets, which of course is the Fed!  They poured “money created out of thin air” into the markets after the coronavirus lockdowns in late March 2020, buying corporate debt and junk bond ETFs with reckless abandon and initiating another huge round of Quantitative Easing (QE).

In addition, the U.S. federal government gave the public stimulus checks (i.e., free money), which was financed by yet another round of Fed QE.  The consequences of that “free money party” is now clearly reflected in rising prices of goods and services (aka “inflation”).

Being late to recognize and combat accelerating inflation in 2021, the Fed is now trying to play catch-up by talk that is lowering the value of all assets as a way to lower inflation (please see “Goldfinger Killing Mr. Bond” closing quote in a recent Curmudgeon column).

The Fed is slowly, but surely, causing a rolling crash of the equities market in a waterfall of red ink rhetoric every time the market shows any signs of rally. The Dow Jones Industrials have declined every week beginning March 25, 2022.  That’s eight weeks in a row, the highest number of consecutive weekly declines since 1923 (which started as a recession in May 1923 to July 1924).

On May 17th, Fed Chairman Jerome Powell spoke late in the afternoon at “The Wall Street Journal’s Future of Everything Festival.”  At that time the S&P 500 was closing up over 2.0%.  Powell’s message was loud and clear: “the Fed will do whatever it takes to bring inflation down.” (Here he really means the markets!)

"We know that this is a time for us to be tightly focused on the time ahead and getting inflation back down to 2%," Powell said. "No one should doubt our resolve in doing that... What we need to see is inflation coming down in a clear and convincing way." And to get there, interest rates will have to rise further, even if that means going beyond the level that is understood as "neutral," commonly thought to be around 2.5%.”

To do this, Fed Chair Powell has targeted the markets, not the money supply, or interest rate increases.  Here’s the proof:

The essence of my critique of the Fed is that it’s trying to talk the markets down using THREATS THAT WILL NOT OCCUR to address “inflation” (which to Powell means “CPI Price Increases”).  Such nefarious tactics have never been done before in American history (as per my reading of Fed meeting minutes from 1959 to date). It is a flawed, reckless, and fraudulent policy, in my humble opinion.

For the last 108 years, the standard way for the Fed to determine its monetary policy goals and accomplish its strategy/tactics was to deliberate with FOMC members at scheduled meetings several times (currently eight) per year.  Previously, there was no forward guidance. Instead, the Fed would discuss, evaluate, and debate the economic data that was empirically collected by their current staff of over 400 PHD’s. Then to make a policy decision as to whether or not to ease or tighten credit and by how much.  Again, that occurred meeting by meeting with no advance guidance given for future FOMC meetings.

What happens in the future is unknown.  Jay Powell is not Nostradamus or a fortune teller! For quite some time, he said inflation would be "transitory."  He was dead wrong.  How does he know inflation will be high this July? What if inflation declines on its own?

So for Powell to publicly talk about future Fed Funds rate increases, BEFORE FOMC meetings, is a blatant abuse of the Fed’s power!

Is the Fed’s goal to make everyone poorer to fix the problem of rising prices they created (by spectacularly increasing the money supply from March 2020-March2022)?

I believe the Fed will never raise rates seven to nine times as they (and several investment banks) have forecasted.  That’s a ruse to scare investors and traders.

They will be lucky if they get one more 50 bps increase in before the financial markets are down 50% or more (equity indexes declined 2% per week on average in May 2022).  Also, unemployment could jump to 5-6%. That is where we are headed.

If politics are involved, one might ask if the Fed will continue to raise rates up till the November 2022 elections?

Everyone in economics knows that Fed Funds rate changes take 12-18 months to have any effect in the real economy.  So, the Fed is now trying, for the first time in history, to threaten the markets with making investors poorer if they don’t obey and stop spending.  Else they will cause a decline into an unknown abyss to help the Fed solve their problem of getting consumer prices down via “the reverse wealth effect” we discussed in a recent Curmudgeon blog post.

In particular, the Fed’s new method of “fighting” inflation is to cause a “reverse wealth effect,” which will scare people into spending less (consumer spending accounts for ~70% of U.S. GDP).

Is the Fed Unconstitutional?

The U.S. Constitution does not mention the need for a central bank, nor does it explicitly grant the government the power to create one. Some critics think the Federal Reserve is too tied to the private sector to be constitutional, noting that the presidents of the 12 regional Federal Reserve Banks are appointed by a board of directors mostly drawn from the private sector.

To be sure, Fed “money printing” (aka “keystroke entries” or “creating money out of thin air”) is UNCONSTITUTIONAL as per Article 1 Section 8 Clause 5.

Why is it then used today as an instrument of the federal government?  Because it serves the interest of “lawmakers” to buy votes.  The richest Americans get an enormous privilege by being first in line in the receipt of newly created Fed money ($9+ billion Fed balance sheet) via rising asset prices.  So, politicians look the other way. while ignoring the law of the land (the U.S. Constitution).

No one has ever challenged the Federal Reserve Act of 1913. However, as we now approach this systemic risk to our whole system of government that could change.

Sidebar- Consumer Credit is so huge it forced a reporting change:

Americans are racking up debt at record rates. Consumer credit in the United States increased by $52.43 billion in March of 2022, up from a downwardly revised $37.7 billion gain in the prior month, and well above market expectations of a $25 billion rise.”

A little over a week ago, when looking at the latest consumer credit data from the Federal Reserve, we were shocked to learn that in March, credit card debt soared by a record $52.4 billion, the biggest monthly increase on record and more than double the expected change.

-->Does such consumer credit card borrowing indicate a strong economy to you?

To stress the obvious (as we have stated repeatedly this year) we are in a bear market for global equities and most other asset classes.  Furthermore, the U.S. is heading for, or is already in, a recession! 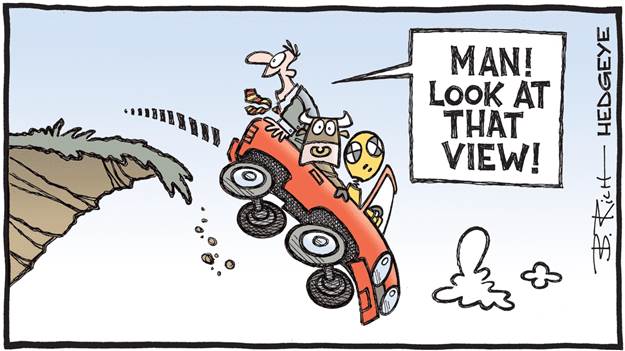 At a historical norm it would be 15 times earnings with a price of $22! High P/E stocks are great with zero interest rates, but P/E’s collapse with higher interest rates.

When we go into a recession the Google’s, Facebook’s, Twitter’s, and other high-tech flyers will get their P/Es crushed.

We haven’t had a real recession (forget the February-April 2020 recession, which was a joke) since the 2008-2009 financial crisis.  Advertising is the first expense to be cut by companies during a recession.  That does not augur well for tech giants which get the majority of their revenues and profits from electronic advertising.

Curmudgeon– An Invisible Hand Appears after a -20% Decline?

Recall Oct 4, 2011, action in last 45 minutes of trading when all market averages were down 20% or more intraday but then popped with noticeably huge volume in stock index ETFs.

Last month, William Dudley, former New York Fed president said, “It’s hard to know how much the U.S. Federal Reserve will need to do to get inflation under control. But one thing is certain: To be effective, it’ll have to inflict more losses on stock and bond investors than it has so far.”

This is like getting cancer and attempting to take three times the prescribed chemo to end it quickly, which it does- by killing the patient. Whomever doesn’t understand this wicked scheme becomes “collateral damage.”

As I’ve repeatedly stated, the U.S. is in “Dire Straits” and Fed market spooking talk is a new dimension of political wickedness.

Can you imagine the Founding Fathers giving 12 FOMC members the power to create a depression for the entire nation?

When these three Corporate Bond ETFs (JNK, LQD, and HYD) decline 10% or more, the U.S. will be in recession and the Fed will change their threatening rate rising rhetoric to calm the markets.

The Feds greatest critic was Louis T McFadden, a House Republician Representative from Pennsylvania. He served as Chairman of the US House Committee on Banking and Currency during the 66-71 Congresses. Attempts on his life were made three times - one by a gun two by poison. The last one was alleged to have killed him.  His anti-Fed activism and rhetoric makes Ron Paul look like Boy Scout

“We have, in this country, one of the most corrupt institutions the world has ever known. I refer to the Federal Reserve Board. This evil institution has impoverished the people of the United States and has practically bankrupted our government. It has done this through the corrupt practices of the moneyed vultures who control it.”

“The Federal Reserve Bank of New York is eager to enter into close relationship with the Bank for International Settlements....The conclusion is impossible to escape that the State and Treasury Departments are willing to pool the banking system of Europe and America, setting up a world financial power independent of and above the Government of the United States....The United States under present conditions will be transformed from the most active of manufacturing nations into a consuming and importing nation with a balance of trade against it.” 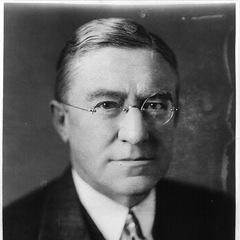 Be well, stay healthy, try to find diversions to uplift your spirits, wishing you peace of mind, and till next time………………………...