Having traded equities, options, and futures since 1968, I’ve learned a great deal that is not taught in schools. Identifying suspicious market movements is one such item.  Let’s examine that theme and assess the CPI report along with the markets.

Last Thursday afternoon, the U.S. equity markets were trading in a narrow range with the S&P 500 at 4106.91 at 1pm EDT. Without any material news, the market started a steep sell off, where every single 15-minute bar chart was down till 4:15pm EDT!  The S&P closed at 4017.82 on Thursday with the selloff accelerating on Friday after the CPI number came in hotter than expected (see CPI Analysis below).

Could that market impacting CPI number coming out the next morning have been leaked by a BLS employee to financial institutions/hedge funds?

That is what the Curmudgeon asked via a text message after the market closed on Thursday.  Let’s examine that theme a bit further.

An actual experience serves to prove my corruption thesis.  In 1988 I had a very well-known reputation, after being profiled in Barron’s in August 1983 and September 1987 (“The Man for All Markets” and “Trader Vic,” respectively).  A famous hangout for traders was Michael’s One.  It was less known than Harry’s, but far less crowded. So, every night after the market closed, my partner Norman Tandy of Rand Management (a money management firm) and Hugo Securities (a market making firm employing 42 traders) would meet for drinks and street talk.

One evening, we were approached by a gentleman named “John I,” who offered to buy us a drink.  He appeared to be a shady character, but very well connected.  His proposition was straight forward: we pay $50,000 cash a year and get the following days economic numbers from the BLS (Bureau of Labor Statistics).

Norman and I looked at each other with eyes locked and agreed. We immediately concluded that this proposition was illegal and so we refused it. Norman gave an answer I’ll always remember, “John, we decline your offer because we don’t like our meals served under a door (e.g., in a jail).”

Perspective on the CPI:

The published CPI number can be anything the BLS bureaucrats want it to be, depending on how it is calculated.  Please see “Common Misconceptions about the Consumer Price Index: Questions and Answers.”  In particular, “Some critics charge that by reflecting consumer substitution the BLS is subtracting from the CPI a certain amount of inflation that consumers can "live with" by reducing their standard of living. This is incorrect: the CPI's objective is to calculate the change in the amount consumers need to spend to maintain a constant level of satisfaction.”

-->So, you can clearly see that U.S. government policy is all about the politics of what they want to achieve.

CONSUMER PRICE INDEX - MAY 2022: The Consumer Price Index for All Urban Consumers (CPI-U) increased 1.0% in May on a seasonally adjusted basis after rising 0.3% in April, the U.S. Bureau of Labor Statistics (BLS) reported today. Over the last 12 months, the all items index increased 8.6% before seasonal adjustment.

The May CPI numbers were not really that bad, especially since the core CPI (excludes food and energy prices) came in at 6% YoY vs an estimated 5.9%.  Yet the stock and bond markets took the slightly higher CPI number as horrible.  Stocks sold off sharply while bond prices declined on Friday, especially the 2-year T-Note where the yield climbed more than 24 basis points to 3.065%, reaching its highest level since 2008!

Every stock market sector was down last week with the economic sensitive Dow Jones Transport index -7.5% on the week.

Based on Friday’s close, we consider the secondary equity bear market correction (which occurred after the May 20th intra-day lows) was less than two weeks, so is considered “minor.”  Therefore, the same downtrend is still in place.

However, there are many divergences in place (S&P 400 and Russell 2000 are above their yearly lows) and investor sentiment is very bearish (which may be a contrary indicator).

In May alone, investors pulled more than $10 billion from sector ETFs.  Financials bore the brunt of the ETF redemptions, with more than $5.2 billion redeemed from funds like XLF, VFH, and KRE.

The total outflow of $10.6 billion was the worst since at least the year 2000. No month in over 20 years had seen a more concentrated exodus. Markets have grown since 2000, but as a percentage of assets under management, May's outflow was still substantial - the 6th-largest out of the past 269 months. 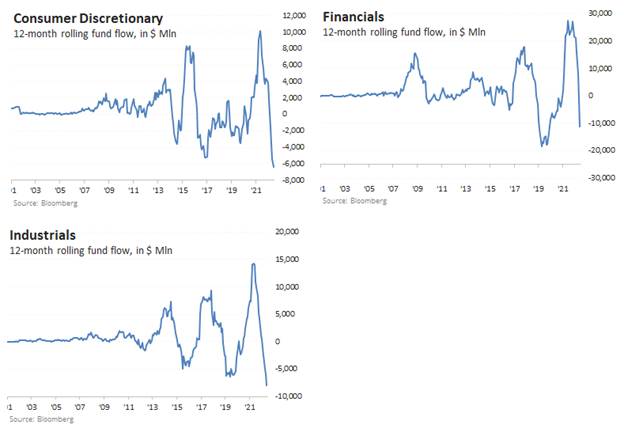 So, depending on the Fed’s actions at their FOMC meeting next Wednesday, there could be a reversal to the upside for equities.

The latest University Michigan Consumer Sentiment index came in at 50.2% - the lowest level since the trough reached in the middle of the 1980 recession. All components of the sentiment index fell this month, with the steepest decline in the year-ahead outlook in business conditions, down 24% from May.  Consumers' assessments of their personal financial situation worsened about 20%.

Don’t forget that consumer spending is largely based on sentiment and makes up ~70% of U.S. GDP.

Chart Courtesy of University of Michigan

Implications for the U.S. Bond Market:

With the economy weakening and consumer sentiment falling off a cliff, the 30-year U.S. Treasury bond did not make a new low in price (new high in yield) last week.   Depending on next week’s trading, long maturity U.S. bonds may have seen their lows – at least for a while.

Our chart of the week speaks volumes about business pessimism. 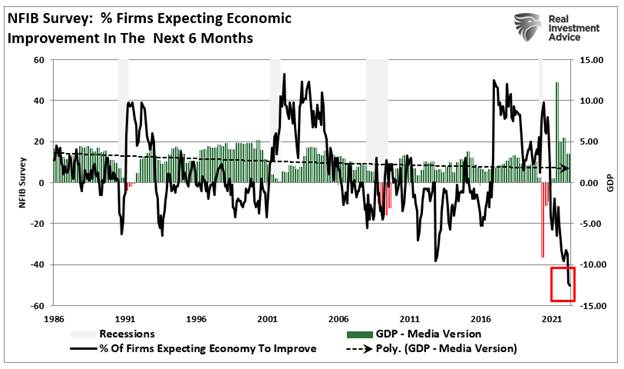 America is now the land of corruption, with bribery the crime of preference. It is so easy to make money if you know in advance a very important market moving number.

I don’t know if “John I” is still alive, but I’m sure he has many clones today.  Please keep this in mind when trading or investing.

It’s important to note that the S&P 500 closed at 3,900.86 on Friday, which is approximately the same level as this year’s closing low of 3,900.79 on May 19th.  Therefore, this week’s trading will be critical to determine future stock market direction.

Let’s see what the Fed does and says at this week’s FOMC meeting. I believe they will be more concerned with recession, and that inflation is less of a problem.  That’s especially in light of serious demand destruction being caused by steep declines in financial markets and the all-time low consumer sentiment. 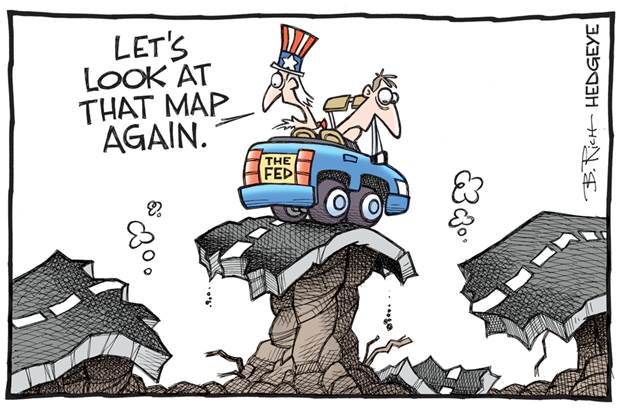 Here’s an interesting song related to today’s society: The Road to Hell, by Chris Rea (song writer and musician):

With a face that I knew like my own, reflected in my window

Well, she walked up to my quarter light and she bent down real slow

A fearful pressure paralyzed me in my shadows

She said: Son, what are you doing here?

My fear for you has turned me in my grave

I said: Mama, I come to the valley of the rich, myself to sell

She said: Son, this is the road to hell

You have strayed upon the motorway to hell

Well, I'm standing by a river but the water doesn't flow

It boils with every poison you can think of

Then I'm underneath the streetlights, but the light of joy I know

Scared beyond belief way down in the shadows

And common sense is ringing out the bells

This ain't no technological breakdown, oh no, this is the road to hell

It's all just bits of paper flying away from you

Look out world, take a good look what comes down here

You must learn this lesson fast and learn it well

This ain't no upwardly mobile freeway