As the Economy Weakens, the Bear Market Rally Will Continue

We examine remarks by an influential member of the Federal Reserve Open Market Committee (FOMC) and the effect it had on the equity markets this past week. Next, we forecast the future direction of stocks, bonds, gold, and the U.S. dollar which are all dependent on forthcoming economic reports and the absence/resumption of Fed market wrangling talk.

The chart of the S&P 500 vs its 200- day moving average should be of interest to readers because it’s a quick way to determine the market’s intermediate to long term trend.  So should our cartoon of the week.

Victor suggests the Fed’s inflation fight was disingenuous as the U.S. central bank has NOT announced outright selling of its bond portfolio, which is the only legitimate way to reduce the money supply and thereby curb inflation.

Please let us know what you think of our work, as we put a lot of time, effort, and energy into it each week. Email the Curmudgeon at ajwdct@gmail.com to provide your comments, opinions, and suggestions.

Here are excerpts of an essay by a FOMC member (emphasis added):

“So, as we expeditiously return monetary policy to a more neutral stance [1.] to get inflation closer to our 2 percent target, I plan to proceed with intention and without recklessness. We have seen throughout the pandemic that events and market shifts can happen quickly and in ways that dramatically alter the prevailing economic dynamic, in both good ways (the rapid rebound in employment right after the initial lockdown) and bad (the rapid rise of the delta and omicron variants). We all must be ready for the unexpected to occur, assess how risks have changed when it does, and stay aware of shifts in the strength of the economy.

Given the very high level of inflation, some might be surprised by my injecting some caution here.

But remember this: even firetrucks with sirens blaring slow down at intersections lest they cause further preventable trouble.”

Note 1.  Notice the term “neutral” rather than “restrictive” with respect to Fed monetary policy. Every other time the Fed raised rates to fight inflation it was said to be restrictive.

The above remarks are from Raphael Bostock, President of the Atlanta Federal Reserve Bank.  They were posted on the Atlanta Fed’s website on May 24, 2022.

Bostic said policy makers could potentially pause interest-rate increases in September after hiking by a half point at each of their next two meetings in June and July. There is no FOMC meeting in August.

“I have got a baseline view where for me I think a pause in September might make sense,” Bostic told reporters Monday following a speech to the Rotary Club of Atlanta. “After we get through the summer and we think about where we are in terms of policy, I think a lot of it will depend on the on-the-ground dynamics that we are starting to see. My motto is observe and adapt,” he added.

Curmudgeon: Fed Vice Chair Lael Brainard spoke the next day (May 25th) at the 2022 Commencement of the School for Advanced International Studies but did not make any comments about tighter Fed monetary policy.  Silence was golden for the markets.

The Fed toning down its rate rising rhetoric is the primary reason for the rally in equities starting on May 24th the day of his statement.  The rally is a “secondary correction” of the bear market’s intermediate downtrend, which began on March 29, 2022, with the S&P 500 at 4631.60. [You can use any equity index you wish - they all started down on March 29th.]

So, expect a 1/3-to- 2/3 stock market rally to retrace the losses from May 24th. However, it would not be surprising for the S&P to test or slightly exceed its March 29th intermediate high.  That’s based on the earlier bear market rally this year.  “The S&P rose to 4631.6 on March 29th, easily taking out its 4587 recovery high set on February 9th,” as the Curmudgeon noted in this post,

What the markets will now pay attention to is the weakness of the U.S. economy, which will indicate if a recession is upon us. Our forecast is the following:

Importance of the 200 Day Moving Average:

Comparing the current price of stocks vs their 200 day Moving Average (MA) is a means of determining the intermediate to longer-term trend of the market. When fewer stocks trade above their moving average, it shows investors are growing increasingly pessimistic.

Currently, only 30% of S&P 500 stocks are above that moving average, which is considerably higher than levels hit during previous times of market stress.  That suggests more room for declines, according to Ally Financial.

The Curmudgeon does not expect a final stock market low till that level is reached.  We think this bear market will be like 1973-1974 where a huge rally in the fall of 1973 convinced many that the bear market had ended. In fact, it lasted another 14 months with the final bottom in December 1974.

Kindly recall that Victor wrote last week that a recession would severely hurt high tech stocks that are highly dependent on advertising for revenues and profits.  That’s depicted by the illustration below, where the bear is about to eat fish named Google and Facebook, while other high tech mega-stock fish like Amazon and Apple are in shallow waters. 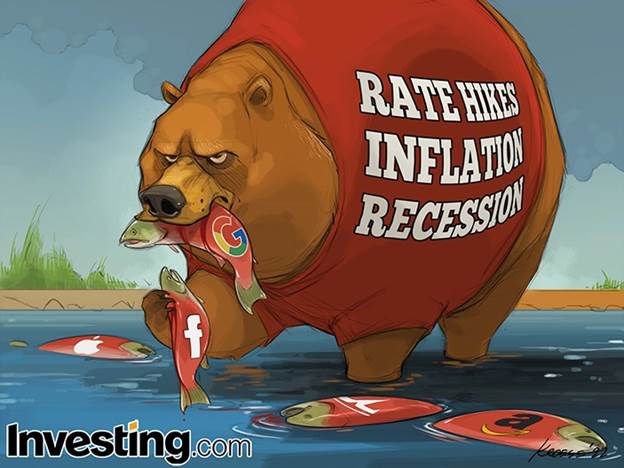 The Fed’s Inflation Fight Was a Bluff:

The Fed's $9+ trillion portfolio has doubled in size during the pandemic as the central bank gobbled up Treasury bonds and MBS to support markets and the economy.

The Fed said this January that it will rely primarily on letting its bond holdings “run off” its balance sheet as they mature, rather than selling bonds outright.

"The Committee intends to reduce the Federal Reserve’s securities holdings over time in a predictable manner primarily by adjusting the amounts reinvested of principal payments received from securities held in the System Open Market Account (SOMA)," the Fed said in minutes released at the end of the central bank's two-day policy-setting meeting on January 26, 2022.

That “runoff” will start this September when the Fed will be cutting $95 billion a month from its holdings, split between $60 billion of Treasuries and $35 billion of MBS.

Fed talk about fighting inflation was disingenuous to begin with, because a “runoff” of maturing debt (not replacing it with new debt purchases) won’t be effective in reducing the money supply.  That’s because the maturing U.S. debt will be replaced by the U.S. Treasury auctioning that same amount (or more) of debt, which will be purchased by another buyer.  So, the money supply will not be reduced. The Fed’s balance sheet will decline in a small way, but the overall money supply level will be about the same.

The real way to lower the money supply is to sell some of the $9+ trillion in assets the Fed has bought since the great financial crisis of 2008-2009.  If the Fed sells bonds from their portfolio that is much more effective in curbing inflation as it would reduce the money supply!  That has not been announced and we wonder if it ever will happen?

The deeply negative Fed talk on the “threats of raising rates” has stopped!  After many weeks of declines, the absence of the Fed’s market spooking rhetoric stimulated the rise in stock indexes this past week.  The DJI was up six days in a row while most other equity indexes were up three consecutive days (Wednesday, Thursday, and Friday).

The stated goal of the Fed is to lower price increases (as measured by the PCI or CPI).  As the economy weakens, price increases will lose some upside momentum such that the CPI will decline (compared to past arithmetic increases).

My guess is the CPI will be at 4%-to-5% by Election Day.  So, prepare for a continued bear market rally.

“Know what you own, and know why you own it." — Peter Lynch

Be well, stay healthy, try to find diversions to uplift your spirits, wishing you peace of mind, and till next time………………………...