A Most Difficult Year for Investors and Traders May Get Worse

This has been an incredibly difficult year for stock market investors and traders.  Both inflation and disinflation/deflation assets have lost ground, while almost every asset class declined. The only assets that rose were ETFs or futures contracts based on the U.S. dollar, oil and the grains (agricultural commodities).  The price swings have been very sharp and swift, which made trading very difficult and frustrating for many professionals.

Money is continuing to leave every asset class and the exodus is deepening as investors rush out of names like Apple Inc., according to Bank of America.

According to Bloomberg, 2022 has seen an $11 trillion wipeout for global stocks, which is the worst losing streak since the 2008 financial crisis. The MSCI ACWI has fallen for six straight weeks, the Stoxx Europe 600 is down 6% since late March, while the S&P 500 has dropped more than 13% since its March 29 recovery high.

Accelerating inflation, and the interest rate increases meant to contain it, will make life harder for consumers. A severe COVID-19 lock-down in China and Russia’s unprovoked invasion of Ukraine are worsening disruptions in the flow of goods across borders, contributing to rising food and energy prices, and threatening corporate profits.

Victor comments on recent Fed market spooking talk which indicates the U.S. central bank wants to keep a lid on the equity markets.  Perhaps a decline in stocks will cause a ‘reverse wealth effect” which the Fed believes may reduce inflation but might cause a recession.

Roller Coaster Moves for Stock Indexes with a Downward Bias:

·        In late March, the S&P 500 rose more than 10% over 11 trading sessions, which caused hedge funds and institutional traders to cover shorts and add to long positions.

In last week’s column, we noted the never-before-seen reversal from the May 4th pop till the May 5th drop, especially the flip in the Advance/Decline ratio.  But there’s more, much more …….

On May 4, the S&P 500 shot up 154 points in 78 minutes to hit a high for the day four minutes before the close.  It was the biggest stock market rally in two years.  Yet the very next day, the S&P 500 tumbled -3.6% after a gap down open, with more than 95% of its companies moving lower. Despite that May 5 heavy selling, the S&P futures shot up 36 points in a single minute only to reverse again to the downside.

The NASDAQ 100 suffered one of its sharpest U-turns ever. The tech benchmark plunged ~ -5%, wiping out its post-Fed meeting gains of the previous day.

In a sign of just how volatile markets have been amid the Fed’s tightening campaign, the rout was only the worst since the previous Friday.

What’s Next for the Markets?

The S&P 500 is still about 14% above its 200-week moving average, a level that’s previously been a floor during all major bear markets, except for the tech bubble and the global financial crisis. 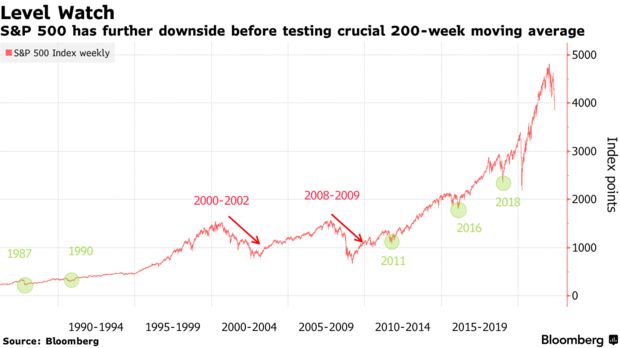 "Our economists assign a 35% probability of recession in the next two years," strategist David Kostin wrote in a note. "However, if by year-end the economy is poised to enter a recession in 2023, a combination of reduced EPS estimates and a wider yield gap would drive a lower index level."

If the economy avoids recession, but real rates keep rising, that will take the S&P down to 3800.

"If the Fed is forced to hike by more than our economists expect and real rates rise to 1%, similar to the peak reached during the last cycle in 2018, our macro model suggests that higher rates will more than offset the lower yield gap," Kostin said. "In this scenario, the forward P/E would equal 16x, the lowest level since 2020."

Meanwhile, tech stocks just suffered their biggest weekly outflows of the year, according to Bank of America. Yet even after crushing price drops, Valerie Gastaldy, a technical analyst at Day By Day SAS, says the sector is at risk of losing another 10% before finding a floor.

“I don’t think we have seen capitulation just yet,” said Dan Boardman-Weston, chief executive of BRI Wealth Management. “This week has been pretty brutal, and investor sentiment, especially in the technology area, is shot to pieces. We’re going to have a tricky few weeks and months ahead.”

If a picture is worth a thousand words, feast your eyes on this: 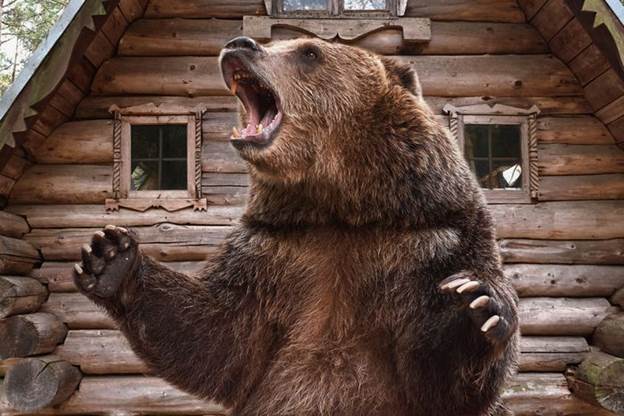 U.S. consumer sentiment slumped to its lowest level in nearly 11 years in early May as worries about inflation persisted. The University of Michigan's preliminary consumer sentiment index tumbled 9.4% to 59.1 early this month, the lowest reading since August 2011. Economists polled by Reuters had forecast the index dipping to 64. The sharp decline is in stark contrast with the Conference Board's consumer confidence survey, whose index remains well above the COVID-19 pandemic lows.

The deterioration in sentiment, which some economists said pushed it into recessionary territory, was across all demographics, as well as geographical and political affiliation. Gasoline prices and the stock market have a heavy weighting in the survey.

Consumer confidence greatly influences consumer spending which accounts for ~ 70% of U.S. GDP.  Hence, the May drop to 11-year lows does not augur well for U.S. economic growth or corporate profits.

“The consumer is the main driver of the U.S. economy,” said Kathy Bostjancic, chief U.S. financial economist at Oxford Economics. “So how the consumer goes, so goes the economy.” Ms. Bostjancic said that as the Fed continues to raise rates this year and into next year, “we see more vulnerability for the consumer and risks of a consumer pullback rise.”

Apparently, the Fed wants to keep the equity markets down with more talk about rate hikes and the increasing possibility of a recession.

On Thursday, after six consecutive down days, Federal Reserve Board Chairman Powell reiterated that raising interest rates by half percentage-point increments at the next two meetings is likely to be appropriate. And San Francisco Fed President Mary Daly also reinforced expectations for half-point hikes in June and July.  You can watch a Bloomberg Day Break video of that here.

Powell also noted that with a tight labor market pushing up wages, avoiding a recession that often follows aggressive policy tightening will be a challenge.  “So, it (a soft landing) will be challenging, it won’t be easy. No one here thinks that it will be easy,” he said.

Those remarks likely caused bonds to get sold in force and yields rising 9 bps on the 10-year T- Notes.

When the Fed doesn’t allow one up day in stocks and bonds without negative jawboning the markets we are in for more losses.

The Fed will have to raise interest rates more aggressively and risk a recession if supply chain issues don't begin to ebb soon, Minneapolis Fed President Neel Kashkari said on Friday, as he reiterated that policymakers are keenly watching how far rates will have to rise above the neutral level.

"We know we have to bring inflation back down to 2%. If the job market softened a little bit, that's not much of a trade-off," Kashkari said during an event at the University of Minnesota in Minneapolis.

"The challenge is going to be if the supply chain issues don't help us, if they don't unwind a little bit on their own ... and we have to use aggressive monetary policy to bring inflation back down then that could lead to a higher unemployment rate, that could lead to a recession," he said.

“Every time the Fed has spoken, markets have taken it fairly negatively,” said Saira Malik, chief investment officer at Nuveen, a global investment manager. “Investors are concerned that with these multiple rate hikes, the Fed is going to cause a recession rather than a soft landing.”

A recession hits the economy in so many negative ways it’s hard to understand Fed Chair Powell and his gang talking like they have recently.  Inflation will come down with a recession, but will Americans be happy and better off when unemployment soars? Will that leave more people homeless? And will the budget deficit and national debt increase to unsustainable levels?  We’ll see before the end of this year!

If there is a recession, Inflation will surely increase as the federal government will return to stimulating the economy to make it look good for the 2024 elections.

·        This looks like a no-win scenario with a soft landing highly improbable.

·        Being a stock market bull today is like playing Russian Roulette with a semi auto pistol.

“Sometimes I wonder whether the world is being run by smart people who are putting us on or by imbeciles who really mean it.” 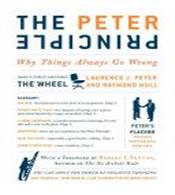