We are not going to comment on world events or analyze markets, as anyone who follows the news can judge what is going on.   Anything we’d write would be drowned out by what you’ve already read, heard and/or viewed.

We take a quick look at the markets, the Fed’s agenda, inflation prospects in light of the Russia/Ukraine conflict, and future U.S. economic growth in this post.  We hope you find it informative and provocative.  Please let us know what you think.

First, a recap of equity markets and some other important secondary markets.

Victor’s Comment: I deeply disagree with the CNBC (and other news outlets) classification of stock market corrections and bear markets, which are based on arbitrary percent declines of >=10% for a correction and >=20% for a bear market.  Instead, I use Dow Theory and long-term moving average classifications.  Those gauges do not suggest a bear market at this time.

The key to equity market direction of LONG-TERM stock market trends for the last 14 years has been Federal Reserve Board Policy.

To this day, the Fed has done nothing to fight inflation.  Instead they have talked the talk about raising rates while slowly reducing their buying of U.S. Treasury’s and mortgage backed securities (the latest round of QE). It’s widely expected that Fed will be raising rates in the smallest way – likely 25bps at the March 17th FOMC meeting.  Wow and whoopy-do!!!

This is telling! When the Fed knew inflation was a huge problem last year, they said it was “transitory” and so it did not stop QE (which creates inflation by increasing the money supply).

Why did the Fed continue to cause inflation when all could see it was accelerating?

Reason:  The Fed did NOT want markets to FALL!  One must conclude that the Fed cares more about keeping markets up than controlling inflation (which is one of their two mandates).

What is the Fed’s Agenda?

I believe the Fed’s agenda is greatly influenced by the mid-term elections. As I’ve stated in previous posts, the Democrats would lose badly if the Fed caused a recession by raising rates too much.  In our Feb 21st column, I wrote:

Inflation will only get worse due to the war in Ukraine.  We’ve already seen oil prices skyrocket and very strong commodity price increases this year.

In the U.S., the biggest impact will be felt at the gas pump (the average price of regular gas in the SF Bay area is now over $5/gallon).  Higher oil and gas prices are expected to add to inflation already running at the fastest rate in over 40 years. Russia was the third-largest source of oil products sold in the U.S. last year — behind only Mexico and Canada — and responsible for 8% of all imports. Russia is also the United States’ second-largest supplier of platinum, a metal used to build exhausts for automobiles.

Sanctions on Russia are starting to wreak havoc on global trade, with potentially devastating consequences for energy and grain importers. It has also worsened supply-chain problems.   Since Russia’s invasion of Ukraine, hundreds of tankers and bulk carriers have been diverted away from the Black Sea, while dozens more have been stranded at ports and at sea unable to unload their valuable cargoes.

Russia is also a leading exporter of grains and a major supplier of crude oil, metals, wood, and plastics — all used worldwide in a range of products and by a multitude of industries from steelmakers to car manufacturers.  Shortages will surely cause prices of many items to rise even further than they would have if not for Russia’s invasion of Ukraine.

The Fed, ECB, BoE and other global central banks are hopelessly trapped between inflation on Main Street (e.g., Euro producer prices up staggering 30.6% YoY pre-invasion: oil price spike, military-sanctions escalation cycle, etc.) and deflating stock prices on Wall Street.  We believe that financial market fall-out due to Russia/Ukraine could cause a global recession.  In that case, there would be little the Fed/ECB or other global central banks could do to stop it. 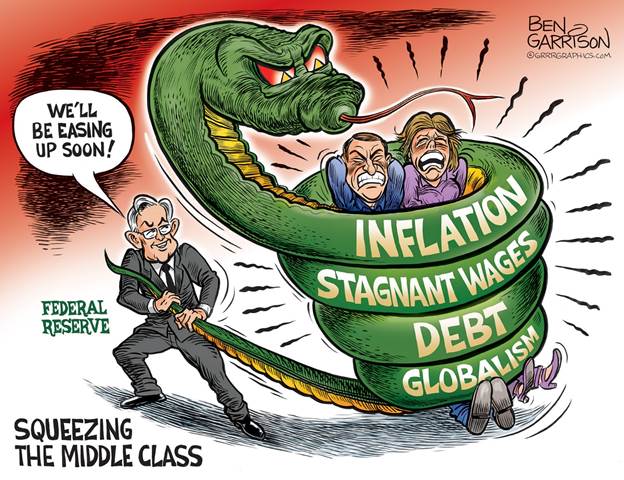 I still believe there will only be two Fed rate increases this year and that they have no real meaning as they are purely for show.

It’s important to note that the economy is slowing:

I estimate that a recession could cause a loss of perhaps 100 House Seats and 10 Senate seats.  That is what the Fed wants to avoid.  It’s the primary reason I believe the threats (and investment bank forecasts) of multiple rate increases won’t happen.

Fed Chairman Powell, who started all the talk of rate hikes, is just talk and bluster.  Without really fighting inflation by raising rates and decreasing the money supply, the U.S. economy will not go into recession.  Time will tell if my thesis is correct.

Curmudgeon Tribute:  Paul Volker was without a doubt the most effective Fed Chairman of all-time.  He helped shape American economic policy for more than six decades.  Here’s a photo of Volker from 1980: 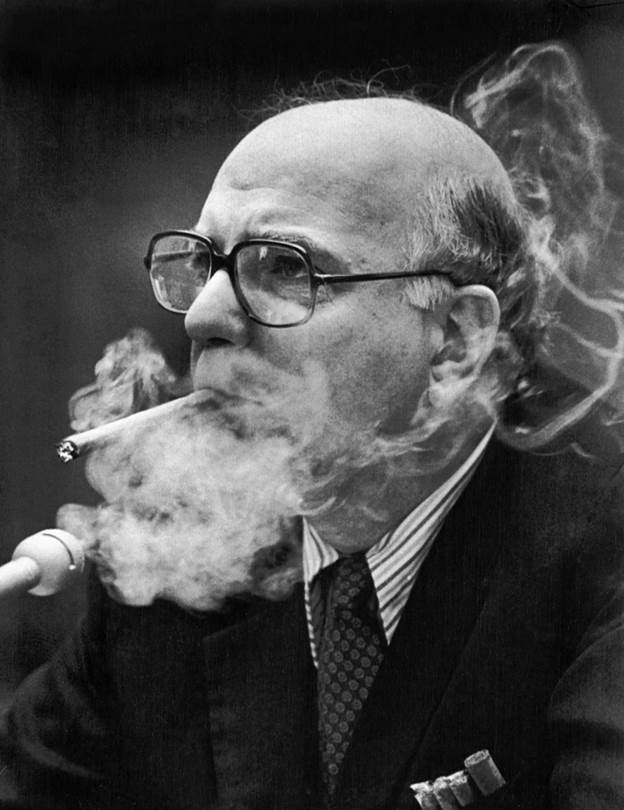