How Long Can the Fed Monetize Debt and Perpetuate So Many Asset Bubbles?

U.S. budget deficits, corporate and federal debt keep rising to surreal levels, yet fixed income investors don’t seem to care. The public debt of the United States went from $8.68 trillion in 2006 to $28.43 trillion now.  [You can view the ever-increasing U.S. debt (and federal revenues) here.]

The bond vigilantes, who were expected to enforce discipline on fiscal spending/excessive budget deficits (by going on bond buyer strikes), have all disappeared.

Accelerating inflation or expectations of a stronger economy have not driven yields up/bond prices down, as the fixed income market evidently expects inflation to be “transitory.”  In fact, the U.S. bond market rallied on Friday, despite a much better than expected jobs report.

How long can this go on?

Will there ever be any consequences of the Fed monetizing so much debt and creating so many asset bubbles (which we’ve chronicled in many previous posts)?

We discuss these questions in this article with Victor providing his answer.  But first a bit of background information.

Backgrounder on U.S. Debt and Deficits:

The level of outstanding corporate bonds in the U.S. is the highest in history at approximately $10.6 trillion. This represents almost half of annual U.S. GDP.

That's on top of record U.S. debt to be auctioned this year in order to finance $3T+ budget deficits (~ 13.4% of GDP).  The U.S. Treasury Department regularly borrows to finance the Federal Government's debt and a big increase in supply previously caused yields to rise sharply.

In decades past, when budget deficits were much lower, there was a concern that strongly increasing public debt would “crowd out” private sector borrowers and make it very difficult for many companies to issue corporate debt.  Well, that fear is long gone with the Fed buying AT LEAST $80B of Treasuries and AT LEAST $40B of mortgaged backed bonds each month. 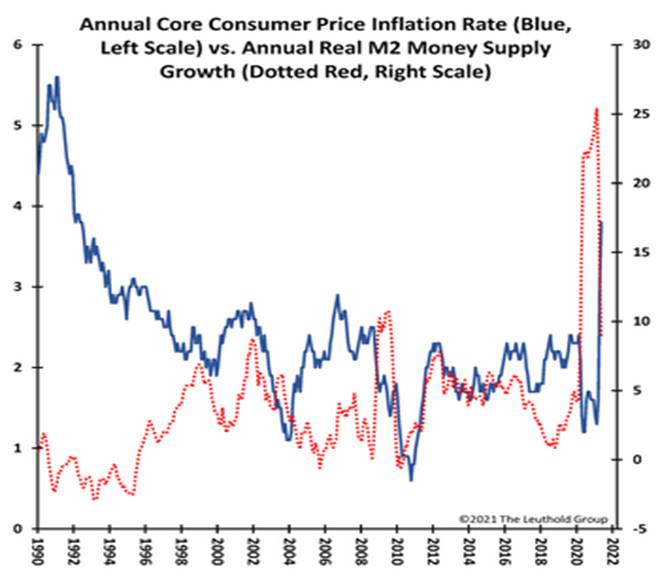 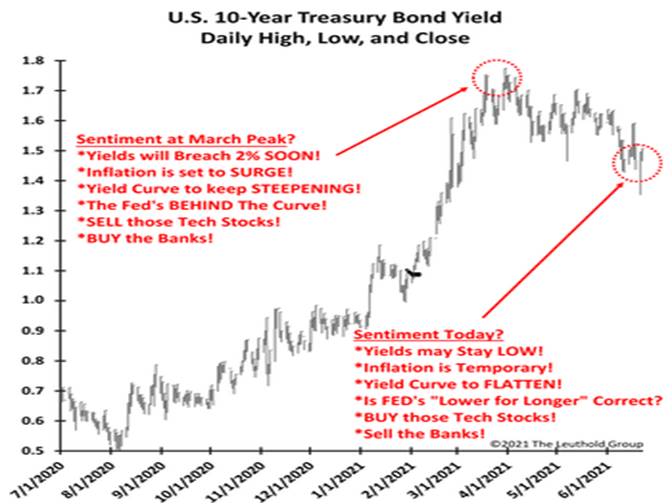 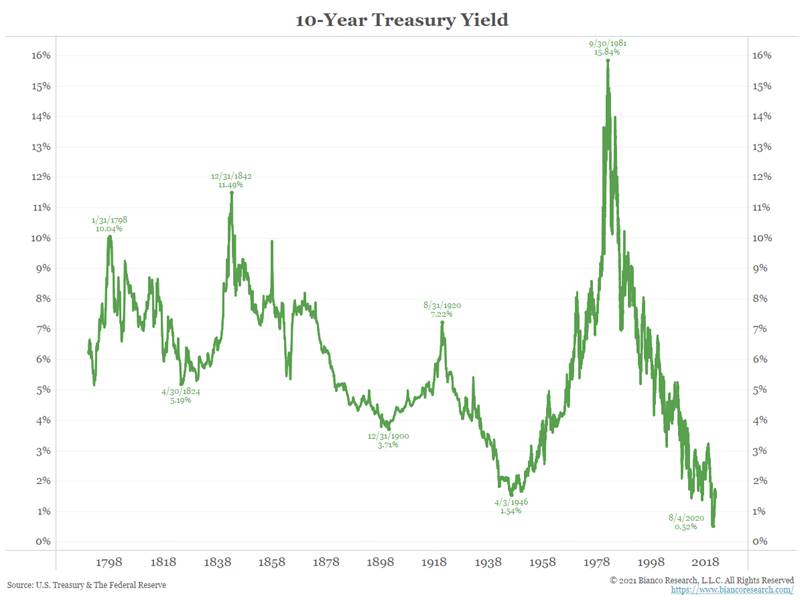 As you can clearly see from the above chart, we’ve had the lowest interest rates of all time for the last 12 years! With negative real rates for most of that time.

But in the meantime, the same loose policies that are feeding asset bubbles will continue to drive consumer price inflation, creating the conditions for stagflation whenever the next negative supply shocks arrive. Such shocks could follow from renewed protectionism; demographic aging in advanced and emerging economies; immigration restrictions in advanced economies; the reshoring of manufacturing to high-cost regions; or the balkanization of global supply chains.

Making matters worse, central banks have effectively lost their independence, because they have been given little choice but to monetize massive fiscal deficits to forestall a debt crisis. With both public and private debts having soared, they are in a debt trap. As inflation rises over the next few years, central banks will face a dilemma. If they start phasing out unconventional policies and raising policy rates to fight inflation, they will risk triggering a massive debt crisis and severe recession; but if they maintain a loose monetary policy, they will risk double-digit inflation – and deep stagflation when the next negative supply shocks emerge.

But even in the second scenario, policymakers would not be able to prevent a debt crisis. While nominal government fixed-rate debt in advanced economies can be partly wiped out by unexpected inflation (as happened in the 1970s), emerging-market debts denominated in foreign currency would not be. Many of these governments would need to default and restructure their debts.

Rational people have been complaining about government deficits and central-bank policies my whole adult life.  Heck, I have!  Yet what’s befallen us?  Nothing. Sure, I’d rather have a sound currency, and a real return on all the money we’ve worked so hard to accumulate.

But aside from making a sound contention that saving money doesn’t matter because money created by the Fed has replaced the value of pooled returns from product output, what can we say? The world goes right on turning, and consumers go right on spending.

The only cautionary tale is a biblical one.  It’ll be as in the days of Noah.  People were eating and drinking and marrying and giving in marriage and the flood came and swept them all away.

Victor’s Response to Tim (edited for clarity and brevity):

Why has Tim’s observation been true to date? Because the dollar and the debt have been relatively stable.  I believe that is caused by “confidence” in the United States. That, in turn, is largely due to having a Central Bank which will back-stop the economy and financial markets at every opportunity.  And a federal government that will use “stimulus programs” to prevent severe recessions.

However, no one should assume that the debt and the U.S. are Frankenstein’s which are like living zombies that never die.

First, nations can and have used their printing press, and political power for long periods of time without consequence.  For example, the USSR lived on for 73 years before dying.

The U.S. debt problem began when Nixon canceled any connection to Gold in August 1971 or 50.25 years ago ending September.  Since then, the “stated" U.S. debt has grown at 8.98% a year.  Meanwhile, real GDP growth has been a meager 2.69% annually over the same time period.

If U.S. government debt continues to grow at the 50-year trend rate, then in 10 years the “Stated Debt” (which excludes” off-balance sheet” and unfunded liabilities) will be $71 trillion.

Thereby, the U.S. Debt to GDP ratio will be 2.65% in 10 years. Again, that does not include any recessions or unknown shocks like the virus or the housing crises in 2008.

-->IMHO, it’s impossible to see how this debt/GDP ratio is sustainable?  Yes, we know about Japan, but that country’s economic growth has stagnated since 1990!

Looking at past great empires -they all have failed ...The last was the British Empire, which ended in a debt crisis in the mid - 1940’s after WW II.  Will the U.S. be any different?

The use of Keynesian economics by the U.S. federal government goes beyond what Keynes recommended, i.e. that governments should use deficit spending to recover from recessions/depressions.

And what about monetary policy? Where Milton Freedman suggested that the Fed increase the money supply at a fixed 6% rate (in lieu of a gold standard), the Fed today has increased QE to AT LEAST $120B per month, increased the M2 money supply by 25%, and skyrocketed its balance sheet to unimaginable levels.  Fed debt monetization continues, despite much higher U.S. GDP forecasts this year, e.g. the IMF forecasts 7% real U.S. economic growth for 2021 (highest since 1984).

Now let’s talk about inflation, which is caused by increasing the money supply (more or less). The extent of actual price increases that arise are from increasing the paper money stock, such that the velocity of money increases (which to a large extent is based on the demand for loans and banks actually filling the loan demand).

Note: We’ve covered the inflation topic extensively in recent Curmudgeon blog posts here and here,  so we will not reiterate why consumer prices have been below the Fed’s 2% target for so long.

Hyperinflation is caused by the mass selling of a nation’s currency, as confidence is lost, e.g., Zimbabwean dollar.  The currency will lose its stability and thereby its “store of value” function.  All “fiat currencies” are based on such confidence as they have no intrinsic backing (e.g., like with the Gold Standard).

IMHO, the end of the U.S. will be due to hyperinflation.  This will begin with MMT (Modern Monetary Theory), which is heavily promoted today. When UBI (Universal Basic Income) kicks in it will cause inflation to skyrocket.  That will greatly cheapen the U.S. debt and, for all practical purposes, end the U.S. as an economic superpower.  A recent example of this model is Venezuela, which has gone from a strong to a very weak economy in the 21st century.

Tim writes that “hyperinflation will come after deflation. The supply of money is increased in response to crisis, which inflates prices until nobody can afford them, and then prices fall, and governments respond desperately to falling prices with yet more money, and confidence in the currency is then lost. We’re still in the first phase of that. But it can happen suddenly.

Rising prices and rising debt are always the first signs of monetary trouble.  Both tell you the standard of living has peaked and will next decline. It’s not apparent right now, any more than it’s apparent that somebody arriving in a private jet is broke.  You’d have to see that person’s balance sheet to know.”

Extremely loose U.S. monetary and fiscal policy have greatly inflated financial assets (art and real estate too), but also created huge debt to be serviced.  Yet there are seemingly no consequences to date.

However, the financial shenanigans game in the U.S. has to come to an end someday, as it always has in the past.  However, one can’t predict the psychology of “when.”  The ending is always delayed when a “printing press” (aka “keystroke entries”) is used to monetize debt and other investable assets, as the last three Fed chairs have done.

As  Josiah Stamp said (Victor used this quote in a previous Curmudgeon post):

"Banking was conceived in iniquity and born in sin... Bankers own the Earth. Take it away from them but leave them the power to create money, and, with the flick of a pen, they will create enough money to buy it back again... Take this great power away from them and all the great fortunes like mine will disappear and they ought to disappear, for then this would be a better and happier world to live in... But, if you want to continue to be a slave of the bankers and pay the cost of your own slavery, then let the bankers continue to create money and control credit."

Josiah Charles Stamp, 1st Baron Stamp, GCB, GBE, FBA (21 June 1880 – 16 April 1941) was an English industrialist, economist, civil servant, statistician, writer, and banker. He was a- director of the Bank of England- and chairman of the London, Midland and Scottish Railway.

Enjoy summer, go to an outdoor concert, read a good book, visit with friends and family, and till next time…….