The inflation fighting vigilance of the new Federal Reserve Chairman Paul Volcker was initially well received by Wall Street. The terrible inflation of the 1970s was finally beginning subside and the Dow enjoyed a modest rally towards the end of 1980. Ronald Reagan defeated incumbent Jimmy Carter in the November elections and the Republicans also took control of the Senate. Two weeks after the Republican landslide, the Dow crossed the 1000 mark for the first time since the end of 1976. The Dow suffered a post-election correction down to 911 in December, but subsequently rallied to 1024 (a 12% gain) in April of 1981 after shaking off Reagan's injuries following an assassination attempt at the end of March. The Dow's close of 1024 was its highest since January of 1973 and the NYSE advance/decline line was also at its highest level since that time. Despite the fact that the Federal Reserve was currently in the midst of hiking interest rates (the discount rate was up to 13% from 10% of a few months ago), the mood on Wall Street was fairly optimistic. Business Week magazine had a feature article in late March titled, "This Time the Rally May Hang On" and this was less than two years after their famous "The Death of Equities" cover story. An early March article of Newsweek, "Reagan's Big Bull Rush" suggested that Wall Street was pleased with the new President's conservative fiscal agenda. 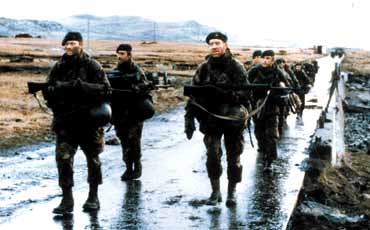 After hitting its highest level in over four years, the Dow quickly lost 6% and closed at 963 in early May as the Federal Reserve raised the discount rate to its all time high of 14%. Investor enthusiasm for Reagan's promised tax cut (the largest ever) allowed the Dow to climb back up to 1012 by mid June. However, a week before Congress enacted the legislation at the end of July, the Dow fell to a new low of 924 which was its lowest of the year. The higher interest rates of the past several months finally began to rein in the economy which officially entered a recession in July. A small bounce allowed the Dow to regain about 30 points by early August, but a confrontation with Libya and threats of new tax hikes helped cause the bear market's biggest sell-off. By late September, the Dow had dropped 130 points (almost 14%) to a new low of 824. At that point, the Dow had dropped 200 points (almost 20%) from its April peak. Although the bear market would last almost another year, it would end up only an additional 4% lower. As the Fed began to lower the discount rate in November and December down to 12%, the Dow rallied almost 70 points to 892 near the end of 1981. Deflation, high unemployment and economic stagnation over the winter drove the Dow down almost 100 points (about 11%) to 795 by mid March of 1982. Despite a major conflict in the Falkland Islands between Britain and Argentina, the Dow clawed its way back to 869 by early May. The British were victorious in June, but by that time, a new conflict was beginning as Israeli troops invaded Lebanon. As Syria became involved, fears of a widespread Mideast war worried the markets. By late June, the Dow was back below 800 to a new low of 790.

With the economy mired in a deep recession, the Federal Reserve once again cut the discount rate from 12% to 11 1/2% in late July and the Dow rose to 833. But despite another discount rate cut in early August to 11%, the Dow fell to what would be its final bottom of 776 less than two weeks later. The Dow's August 1982 low of 776 was its lowest close in over two years and marked the end of the secular bear market that began back in 1966. As one would expect at the end of a secular bear market, sentiment was rather bearish. Two months before the end of the bear market, Business Week ran an article titled "Running scared from stocks." In late March, when the Dow traded in the low 800s (close to its final low), Forbes ran an article titled "Waiting for the bloodbath [selling panic that will mark the end of the bear market]." The "bloodbath" never materialized as expected and the Dow hit its final low of the secular bear market with a whimper. Just a few days later in mid August, the Fed cut the discount rate again to 10 1/2% and that (along with positive interest rate comments from Henry "Dr. Gloom" Kaufman) was enough to spark a furious institutional buying panic. The day after the Fed discount rate cut, the Dow surged almost 40 points or 5%. Another discount rate cut at the end of August helped the Dow finish the month above 900 for an incredible three week gain of 16%. Bearish sentiment evaporated and after another 50 basis point discount rate reduction in October, the Dow finally made a new all time high in early November. From its low in August to its first all time high in almost ten years, the Dow gained 275 points or 35%. With two more cuts in November (the month the long recession ended) and December, the Fed lowered the discount rate to 8 1/2% by the end of 1982 and the current secular bull market in stocks and interest rates was born.