U.S. equity markets rallied sharply on Friday.  All indexes were up over 1% with the NASDAQ 100 (i.e., QQQ ETF) +2.74%.   [The NASDAQ composite has increased every week in January and is +6.4% this year].  Friday’s market advance was after three days of declines and in the absence of ANY good economic news.

In particular, existing home sales declined for the 11th consecutive month and fell to their lowest level since 2014.  Retail sales sank 1.1% in December.  Google parent Alphabet joined a chorus of tech giants announcing massive job cuts (12,000), amplifying fears that the U.S. may slip into a recession this year. Microsoft also announced 10,000 layoffs earlier this week.  Finally, both the Institute for Supply Management’s services and manufacturing purchasing managers’ indexes fell into contraction in December.

So why was the market so strong on Friday?  We attempt to answer that question in this post and speculate on whether that trend might continue.

It’s becoming apparent that the CPI is decreasing and, as a result, interest rate increases will be smaller.  In recent public statements and interviews, Fed officials have said slowing the pace of rate increases to a more traditional quarter percentage point would give them more time to assess the impact of their increases so far as they determine where to stop.

Fed rate increases are aimed at slowing inflation by reducing demand, “and there is ample evidence that this is exactly what is going on in the business sector,” Fed governor Christopher Waller, an early and vocal advocate for aggressive rate rises last year, said on Friday.  Waller said he would favor a quarter-point rate rise at the coming FOMC meeting.  Waller also said that rates are already high enough to be slowing the economy. The remarks could have helped calm rising-rate worries in the equity market.

Apparently, the Wall Street consensus is now for a 25 bps (rather than 50 bps) rate hike at the Fed’s Jan 30-Feb 1st meeting and that realization caused Friday’s strong market move.  And perhaps a pause after that?

FOMC members will have two more months to evaluate several widely watched economic indicators, including on hiring and inflation, before their March 21-22nd meeting. They pay close attention to a detailed measure of worker compensation called the employment-cost index, which is set for release on Jan. 31st.

There’s something else that may happen that is starting to be discussed.  As the decline in the CPI is not happening fast enough for the government’s liking, the BLS will artificially lower the CPI by changing the way its calculated!  I believe this will occur in the coming months and will lower the CPI to 2 to 3% annually.

“Starting with January 2023 data, the BLS plans to update weights annually for the Consumer Price Index based on a single calendar year of data, using consumer expenditure data from 2021. This reflects a change from prior practice of updating weights biennially using two years of expenditure data.”

From the FFTT Report by Luke Gromen  (subscription required):

-->The Fed can then use the artificially lower CPI as cover to pause and/or lower rates. This potential change is so serious that I recommend those that are short stocks should either be hedged with long positions or cover their short positions.

The remaining shoe to drop is the NBER’s official announcement of a recession which manifests itself in lower earnings and higher unemployment.

Here’s a graph of post WWII recessions along with unemployment rates:

If we assume the current recession started in January 2022, then we are approaching the 13th month. The NBER has to rule on our recession call, so it is not official until they do so.

Is Uncle Sam now a magician attempting to disguise a recession as a bunny? 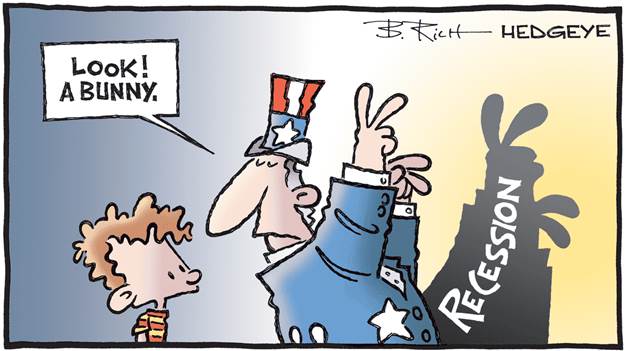 Regarding the unemployment numbers, the BLS monthly employment report always shows increases in the establishment survey, which the markets deem to be bullish? Of course, we’ve explained in numerous Sperandeo/Curmudgeon posts with the BLS using Seasonal Adjustments and the “ghost additions” of workers from the Birth/Death Model (BDM).

It’s astonishing that the biggest companies are laying off workers, but I never see an announcement of hiring.  Also, the big tech company layoffs are impacting higher paid professionals while the vacant jobs are for lesser skilled hourly workers.  That results in a huge discrepancy of lost consumer buying power.

The ploy of changing numbers is one of the U.S. government’s favorite tactics to deceive the public and make themselves look good. This was effectively used before the 2022 mid-term elections by the BEA.

On September 27th, the Atlanta Fed’s 3rd quarter GDP Now estimate was 0.3% and that was after two down quarters (aka a recession).  Just two days later – on September 29th - the BEA changed the past GDP data to a lower base with other adjustments.  Voilà, the estimated GDP for the 3rd quarter went up eight times to +2.3%! We explained that in this October 3rd expose: Sperandeo/Curmudgeon: 3rd Quarter GDP EST Adjusted Up 800% Overnight!

As of 1/20/23, the Atlanta Fed now estimates that 4th quarter will be +3.5%! Thereby, government induced “adjustments” are a wonderful thing for markets, but most professionals don’t see the con.  Perhaps, they should be reading our weekly columns?

If the recession is dated from January 2022, then the odds favor it being over by this April.  We’ll just see, but a recession generally has to have unemployment in the 5% area and we’re not near that level yet.

As previously stated in past posts, it’s my view the current economic decline will be worse than a recession.  If so, the Fed should ease aggressively as they did in March 2020.  The markets would then soar as they have during every previous round of QE.

Manipulating the CPI data and then continue with reckless government spending financed by “printing money” (AKA keystroke entries) will end very badly.

One of the 20th centuries greatest comedians had this observation on politics.

“Politics is the art of looking for trouble, finding it everywhere, diagnosing it incorrectly and applying the wrong remedies.” Groucho Marx 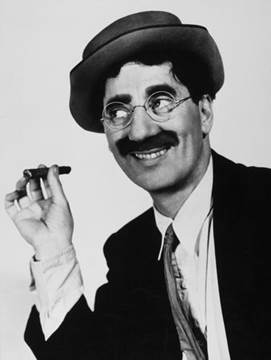