Backgrounder:  “GDPNow is not an official forecast of the Atlanta Fed. Rather, it is best viewed as a running estimate of real GDP growth based on available economic data for the current measured quarter. There are no subjective adjustments (really ???) made to GDPNow—the estimate is based solely on the mathematical results of the model.”

Statement from the Atlanta Fed:

“The GDPNow model estimate for real GDP growth (seasonally adjusted annual rate) in the third quarter of 2022 is 2.4% on September 30, up from 0.3% on September 27. After recent releases from the U.S. Bureau of Economic Analysis (BEA) and the U.S. Census Bureau, the nowcasts of third-quarter personal consumption expenditures growth and third-quarter gross private domestic investment growth increased from 0.4% and -7.6%, respectively, to 1.0% and -4.2%, respectively, while the nowcast of the contribution of net exports to first-quarter real GDP growth increased from 1.10 percentage points to 2.20 percentage points.”

The BEA is a U.S. government bureau under the Executive branch.  So, all of a sudden GDP will be up for this year after being negative for the first two quarters?

Opinion: Wherever you look in government you’ll find corruption, mostly through bribery and government manipulation!  This upward revision of GDP is a perfect example of that.  The data by the BEA is purely lies for political purposes before the U.S. mid-term elections.

Let me repeat my strong belief: IF the Fed completes its projections to raise rates 75bps on 11/2/22 and 50 bps on December 14-15/22 the U.S. economy will be in a Depression.  Regardless of the past changes by the BEA, we’re in a recession now as I’ve repeatedly stated in these Curmudgeon posts.

For example, the PMI [1.] dropped from 51.8 to 45.7 on the last report. A PMI reading under 50 represents a contraction in manufacturing.

Note 1.  The Purchasing Managers Index (PMI) is a measure of the prevailing direction of economic trends in manufacturing.

“The U.S. LEI declined for a sixth consecutive month potentially signaling a recession,” Ataman Ozyildirim, Senior Director, Economics, at The Conference Board. “Among the index’s components, only initial unemployment claims and the yield spread contributed positively over the last six months—and the contribution of the yield spread has narrowed recently.”

·        The Pending Home Sales index for August was -2% which was its third straight monthly decline. That index fell 24.2% from a year ago.

·        Meanwhile, the S&P Case Shiller U.S. home price index decreased by -2.9% in July (the latest month available).  That was the fastest rate of decline in the history of the index.

As Ayn Rand so aptly put it: “You Can Avoid Reality, But You Cannot Avoid the Consequences of Avoiding Reality.”

Like the Fed, the Bank of England (BoE) was raising rates and doing QT when it suddenly flipped back to QE.  It seems when rates were very low or zero, UK Pension Plans needed more money to pay beneficiaries. They borrowed money as rates were very low and bought more higher yield debt.  For example, paying 25-50 bps to buy bonds yielding 2.5-3%. As bond prices dropped, the Pension funds were crushed and got huge margin calls. The BOE then started to buy Gilts to prop up the UK bond market and thereby save the Pension Plans.

U.S. Pension Plans did the same thing by buying BBB or higher yielding debt that was internally leveraged by the selling corporations, which took the money to buy back their stock.

The risk here is best illustrated by U.S. high yield ETFs like the iShares High Yield Debt (HYG), iShares Investment Grade Debt (LQD), and Bloomberg High Yield Bonds (JNK). They are all trading below their March 2020 “closing” lows. Those intraday lows were panic sales until the Fed stepped in to buy junk bond ETFs (which is not permitted in its charter).

All markets (except the U.S. dollar) are falling rapidly, steadily, and consistently. Every asset class is down double digits this year.  There’s been no place to hide other than cash.

U.S. stocks may not be adequately discounting the potential for further earnings declines, as BofA has warned since the beginning of this year.  Latest BofA comment: Over the past 100 years, when the S&P 500 was 20% below the 200-day moving average, it has typically been a good entry point to get back into stocks. This would be around 3374, a level that could force policy panic especially with the G20 on November 16th.

To make matters worse, the Fed continued its non-stop, hawkish drumbeat last week as per this article.  If the FOMC member cockroaches continue to come out of the woodwork to threaten the markets with higher rates, then investors, traders and speculators will capitulate in a big way.  That will result in a MAJOR CRASH as I suggested in last week’s column - Message to the Fed: Grave Dangers of a Hard Landing.

There could be a lot more margin calls for speculators long stocks.  As of August 31, 2022 (the latest data available), total U.S. margin debt was $688 billion, which represents a decrease of $299 billion year-over-year.  Further market declines could feed on themselves from long liquidations in margin accounts.

Since inflation is a monetary phenomenon then why is the Fed’s Balance sheet higher now than it was 10 months ago?

Answer:  Because the Fed is a function of U.S. federal government spending! As long as Congress and the Senate continue to spend more than the government receives from taxes, the money will be financed by the Fed and its member banks.

Note: Money supply is flat this year as the Fed reverse repos (a drain of money from the system) hit a new high of $2.425 trillion on 9/30/22. The increases in money don’t show up on the Fed’s balance sheet but are in the Reverse Repo Facility.

What to Watch Next Week:

On Friday, the BLS non-farm payroll report for September will be released.  The consensus forecast is for 275,000 jobs added vs. 315,000 the previous month.  I think it could drop to less than 100K jobs added, because the seasonally adjusted data has to balance with the real jobs counted by the end of the year. The seasonally adjusted number is 40% higher than actual jobs counted because of the birth death model (as explained in numerous past Curmudgeon posts). 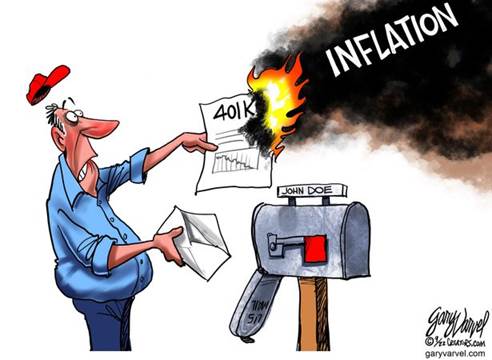 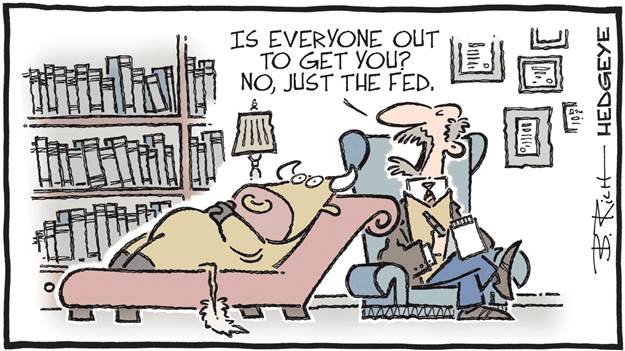 “Freedom is for honest people. No man who is not himself honest can be free – he is his own trap.”      Unknown

Explanation: Centuries ago, the Greek philosopher Diogenes walked the streets with a lamp held high in search of an "honest man." His street theater suggested a quiet but dramatic protest against what he viewed as a corrupt society that smirked at government ethics and ignored personal responsibility.