We noted in last week’s column that Treasury Secretary Janet Yellen had told Congress that the U.S. will hit its debt limit on Thursday, January 19th and that the Treasury Department would  begin “taking certain extraordinary measures to prevent the United States from defaulting on its obligations.”

The U.S. Congress places a limit on the amount of debt the country can issue, with a simple majority in the House and Senate required to lift it. That cap, known as the “debt ceiling,” [1.] is currently $31.4 trillion.  It needs to be raised to allow the U.S.  to borrow to pay for obligations it has already committed to, such as funding Social Security, Medicare and welfare programs, interest on the national debt and salaries for the military and government officials.

Note 1.  The debt ceiling, also called the debt limit, is a cap on the total amount of money that the federal government is authorized to borrow via U.S. Treasury securities, such as bills and savings bonds, to fulfill its financial obligations. Because the United States runs very large budget deficits, it must borrow huge sums of money to pay its bills.

Institutional investors and bank economists are using financial models to predict when the United States will run out of cash and not be able to borrow. They are assessing what it could mean if the government is unable to pay some of its bondholders and the country defaults on its debt.

We take a closer look in this article.

Ralph Axel, rates strategist at Bank of America, believes that a default in late summer or early fall is coming.  “We think it is likely that by late summer or early fall, the federal government will temporarily be forced to default on a portion of its daily obligations for a time ranging between a couple of days to a few weeks,” he wrote in a commentary.

“If so, this would represent the first time in history that the U.S. would default on any of its obligations due to the debt ceiling law. We think such an event would include a fall in equity and bond prices, potentially testing the U.S. Treasury market functioning and liquidity.”

That could be quite an understatement. It wouldn’t be surprising if investors hit the panic button and dumped assets by the bucketful if the Treasury market froze.  That happened in earnest after the coronavirus pandemic started in March 2020.  Trading in the Treasury market broke down as investors rapidly sold government debt which set off a chain reaction of asset dumping, bedlam that stopped only as a result of Fed intervention.

Goldman Sachs called the possibility that the U.S. government would default on its bills a “greater risk” than at any time since 2011. When the nation approached the brink in that debt ceiling episode, its credit rating was downgraded, and wild market gyrations helped to force lawmakers to quickly come together to raise the debt ceiling.

T.D. Securities analysts think that the credit rating on U.S. debt is likely to be lowered if negotiations go badly, which could spook some investors. S&P Global Ratings downgraded U.S. debt in 2011 [2.], but other major rating agencies still award the sovereign their top assessment. They also expect that investors and traders will sell out of risky assets like stocks and junk bonds if a default occurs, while fleeing to the perceived safety of longer maturity Treasury bonds.

Note 2.  In the month before the debt ceiling was raised in the summer of 2011, U.S. T-bills swiftly fell in value, pushing their yield — indicative of the government’s cost of borrowing for three months — sharply higher. Stock prices fell, while the 10-year Treasury note rose in value (yields fell), because it was seen by investors as a safe place to park their cash.

In August 1971 the U.S. went off the International Gold Standard (aka the Bretton Woods Agreement) The “On Budget” Debt was $398 billion. At $31.4 trillion, today’s debt is 79 times higher! And that’s not counting “off budget” items or unfunded liabilities. That is a compounded yearly rate increase of 8.76% for 52 years.

Why was this stupendous increase in the U.S. debt tolerated?  Why isn’t it a huge issue now?

The answer is that the U.S. Congress is allowing huge budget deficits to be financed via a seemingly unlimited amount of fiat (paper currency) dollar denominated debt.

The 14th amendment, section 4 of the U.S. Constitution does not allow for a legal debt default:

Section 4 of the 14th Amendment was intended to reassure holders of U.S. government debt incurred during the ruinous conflict that all obligations would be met (except for those incurred by the Confederacy). Whether the section’s provisions even apply to current circumstances and the wrangling over the “debt ceiling” is a vexed question at best.

The only way this would change is for foreigners to largely lose confidence in the dollar and sell it OR for the amendment to be repealed.

As long as people and institutions continue to hold U.S. dollars (the world’s reserve currency), the debt ceiling will be raised continuously.

Eventually, the U.S. will suffer the same fate as every other nation that increases its fiat currency without any real backing -- confidence in the dollar will be lost, the currency will be sold, and hyper-inflation will result.

From a July 8, 2013 Curmudgeon post: “Rather than default on debt, Victor feels that governments will resort to printing money to fight the next global recession and that will quickly lead to hyper-inflation.” 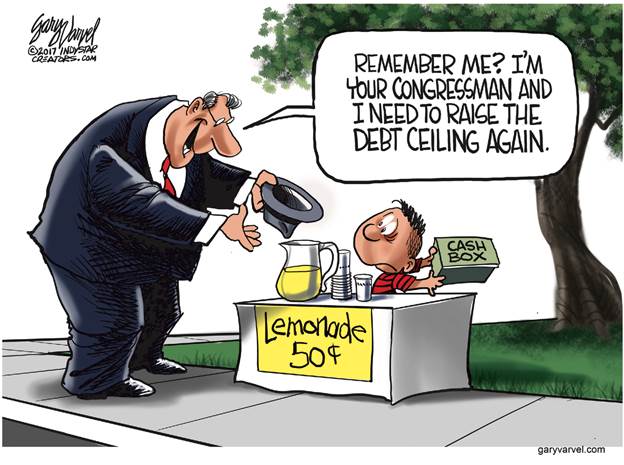 What Might the U.S. Treasury do to Prevent a Financial Market Meltdown?

Ms. Yellen said last week that she plans to take two steps to buy lawmakers more time to reach a debt limit deal.  The U.S. Treasury will redeem existing investments and suspend new investments in the Civil Service Retirement and Disability Fund and the Postal Service Retiree Health Benefits Fund. And it will suspend reinvestment of the Government Securities Investment Fund of the Federal Employees Retirement System Thrift Savings Plan.

If the initial steps that Ms. Yellen has outlined are not enough, there are other tools at her disposal. For example, the Treasury could prioritize payments, something that was considered in past debt limit debates and which lawmakers might push for. By paying back bond holders first, it could theoretically forestall financial market disaster.

However, the trade-offs could be crushing, forcing U.S. government officials to decide between paying financial markets, disability rosters or health care systems.

Another option would be to suspend certain types of investments in savings plans for government workers and health plans for retired postal workers. The Treasury can also temporarily move money between government agencies and departments to make payments as they come due.

A 2012 Government Accountability Office report said that to manage debt when the borrowing cap is in limbo, the Treasury secretary could suspend investments in the Exchange Stabilization Fund (a large amount of dollars that can buy and sell currencies and provide financing to foreign governments).

The Treasury Department also oversees the Federal Financing Bank, which can issue up to $15 billion of its own debt that is not subject to the debt limit. In a debt ceiling emergency, Ms. Yellen could exchange that debt for other debt that does count against the limit.

The Risks of “Extraordinary Measures:”

Delaying the debt limit does not come without costs.

“There were several instances when we didn’t have sufficient cash on hand to meet even our next-day obligations. During the course of that impasse, Secretary Yellen wrote eight separate letters to Congress regarding the importance of acting to address the debt limit.”

Christopher Campbell, who served as assistant Treasury secretary for financial institutions from 2017 to 2018, said that because there so many variables in play, it is often difficult to give a precise estimate of the grace period between when the debt limit is breached and when the United States potentially defaults on its obligations.

In her letter to Congress, Ms. Yellen said ominously that “Treasury is not currently able to provide an estimate of how long extraordinary measures will enable us to continue to pay the government’s obligations.” She added that it is unlikely that cash and extraordinary measures will be exhausted before early June.  That aligns with Bank of America’s reckoning of a late summer or early fall U.S. debt default.

“You can’t put Humpty Dumpty back together again if you default on the debt.” …. William C. Dudley, the former president of the Federal Reserve Bank of New York.