Several markets have rallied sharply over the last few weeks, so it’s time for a quick review since our last market outlook on December 12, 2022.  We also comment on cryptocurrencies, the Fed, U.S. & global economy, and the U.S. debt limit which will be hit this coming Thursday.  Finally, we examine Wall Street’s new bullishness and if the bear market is still in effect.

·        Crude Oil was down the first two days of January then rallied for seven consecutive days. Bullish.

Comments on Markets, the Fed, and the Economy:

1.  Cryptocurrencies (other than Bitcoin) have major issues:

In my opinion, this really will end Crypto’s as an alternative currency.  Bitcoin is considered more of a commodity than a security so it will likely remain unaffected.

The Fed is widely expected to raise the Fed Funds rate 25 to 50 bps at the conclusion of its February 1st meeting.  Of course, Fed Chair Powell’s comments after the meeting will be potentially material. They are expected to also raise rates another 25 bps at the March 2022 meeting and keep rates above 5% for six to nine months, according to Fed dot plots and comments from Fed officials.

Last Monday, Atlanta Fed President Raphael Bostic said the U.S. central bank should raise interest rates above 5% by early in the second quarter and then go on hold for “a long time.”

Hence, there will be no real economic growth in the U.S. this year.  Almost every economist predicts a recession, but I’m of the contrary view that we will be in a depression due to Fed rate hikes while the economy is weakening.

In its new forecast, the World Bank joined the chorus warning of a potential global recession in 2023.  Whether economic growth declines or only stagnates, the long-term trend is concerning for developed and emerging markets. The World Bank forecasts global per capita income to grow by just 2.8% this year, compared with 6 % before the pandemic.

The 2023 global economic outlook is depicted in this chart: 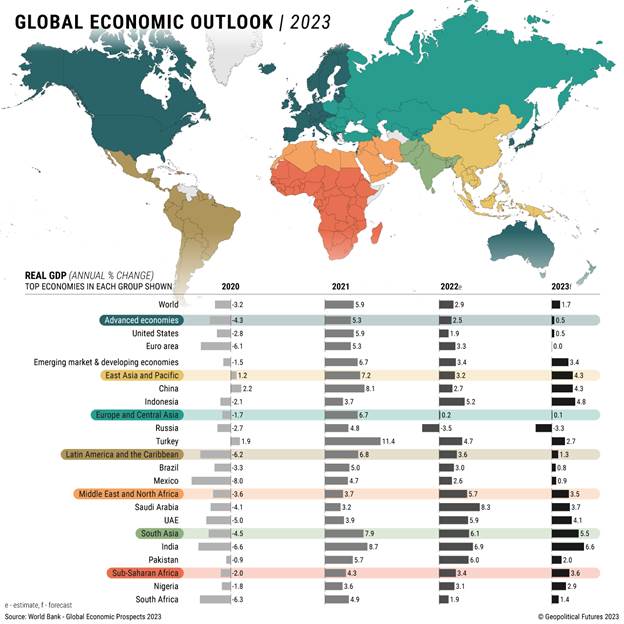 A weekend Bloomberg article (subscription required) stated, “Other historical data points also suggest that the optimism of the past two weeks isn’t misplaced. Among them: there have only been two back-to-back annual stock-market drops since 1950, during the recession of the early 1970s and after the bursting of the dot-com bubble at the start of this century, which lasted three years. Nothing along those lines is expected in 2023, at least among the base-case scenarios from most Wall Street strategists.”

The CBOE VIX Index — a gauge of projected price swings in the S&P 500 that normally moves in the opposite direction of the index — finished last week at around 18, the lowest since January 20022.  That indicates investors and traders are extremely complacent and don’t expect any major market shocks.

Institutional investors have been covering their short equity bets in the past several weeks and earlier this month boosted their net-long position to the highest since May 2022, Ned Davis Research’s analysis of CFTC data show.

In light of this past week’s rally, several stock market timing services turned all-out bullish and went 100% long.  Several sited the S&P 500 breaking above its 200 day Moving Average (MA).  One analyst stated: “All counter trend rallies in this bear market have failed at the 200-day moving average. That means that, if this break above this key line holds, the odds of a new bull market will increase.”

Indeed, many advisors are viewing the crossing of the 200-day MA as bullish. That is a major error!

As I have discussed in other Sperandeo/Curmudgeon posts, the 200-day MA can ONLY be considered bullish IF prices close above the 200 trading day MA AND it is “sloping upwards.”  Currently, all indexes measuring the 200-day MA are still trending lower. Until that reverses the major trend remains down.

That’s despite counter-trend rallies.  The Curmudgeon and I don’t agree with the bulls on Wall Street. We expect U.S. stocks to decline below the October lows once the recession becomes apparent via higher unemployment and lower earnings.

Most importantly, earnings always decline in recessions.  With stock valuations currently at very high historic levels, we expect P/Es to adjust and stocks to fall.  The S&P 500’s P/E ratio should decline to the 14-15 level.

Bottom Line: If the U.S. experiences a serious recession, with earnings and valuations at a peak and turning down, the equity market cannot go up!   Liquidity won’t improve with short term interest rates remaining high, QT continues, and the money supply is contracting.

Hence, the bear market remains, as the long-term trend remains down. 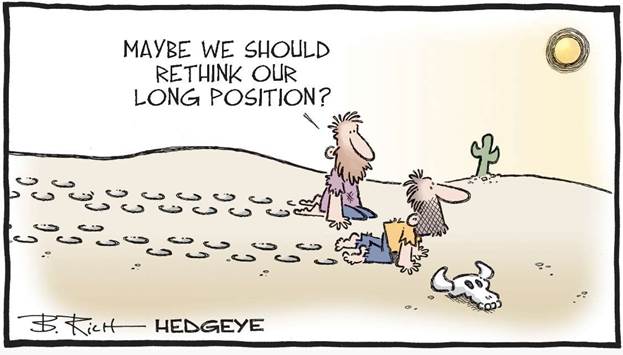 U.S. Debt Limit to be hit this Week:

On Friday, Janet Yellen warned Congress that the U.S. is projected to reach its debt limit next Thursday.   Previous forecasts suggest a U.S. debt default could instantly bury the country in a deep recession, just as global growth is dramatically slowing (see chart above). The financial markets could crash, and several million workers could be laid off.

We’ve discussed the debt limit problem (with respect to a dysfunctional Congress) in last week’s post. More on this topic in our next column.  Please let us know if you’re interested (email: ajwdct@gmail.com).

When investing or trading, please remember the words of Charles Darwin:

“It is not the strongest of the species that survives, nor the most intelligent that survives. It is the one that is the most adaptable to change, that lives within the means available and works cooperatively against common threats.”