Victor questions if Fed jumbo rate hikes have gone too far with inflation declining and expected to be lower in 2023.  Recession forecasts are now mainstream with several aggravating factors which we describe.  That will further decrease inflation.

The review and outlook for several asset classes are presented with a bullish outlook for gold, silver, and commodities. We explain central bank digital currencies (CBDCs) and a possible commodity backed currency with their potential impact on the markets.

Victor’s conclusion is a commentary on the sad state of the U.S. government.  It’s augmented with the Cartoon of the Week.

The Fed is still in the “we want to make you poor mindset” in order to stop the inflation that they created by ballooning the money supply!  Therefore, Fed heads continue to look for excuses to talk the markets down with their hawkish drumbeat.

Few others comment on this outrageous Fed strategy. The talk about future rate hikes is done without evaluating the forthcoming economic data or debate at FOMC meetings.

-->The people observing and reacting to every Fed word are the sheeps of Wall Street.

After four consecutive 75 bps “jumbo” rate hikes, the Fed is widely expected to raise the Fed Funds rate by 50 bps on Wednesday. That despite that Inflation has been decreasing.

1. The wholesale price index (PPI) has fallen from a monthly rate of 1.7% in March to 0.3% for September, October, and November.  It came in 0.1% higher than the consensus expected in November which was an excuse for the markets to decline. That’s a sham as estimates always have a range.

2.  The consumer price index (CPI) has also declined – from 8.1% in June to 6.9% in October.  As you can see in this table, the inflation trend is clearly down.

With the economy expected to weaken significantly in 2023, inflation will surely decline further.

Recession talk is getting louder as everywhere you look people are forecasting a recession. I have repeatedly stated that the U.S. is already in a recession and headed for worse – possibly a depression (no one uses that word in public) Where will the economic growth come from to prevent a depression?

"Recession is foretold as central banks race to try to tame inflation. It's the opposite of past recessions," BlackRock strategists said.  "Central bankers won't ride to the rescue when growth slows in this new regime, contrary to what investors have come to expect. Equity valuations don't yet reflect the damage ahead."

Here are a few aggravating economic facts, as espoused by two professionals and the negative implications of an inverted yield curve.

“Total Debt to GDP ratio is 420% higher than the Great Depression (1929-1939) and after WW II. With governments unwilling to raise taxes or cut spending Central Bank deficit monetization will once again be seen as the path to least resistance.” Jesse Felder.

“After years of ultra-loose fiscal, monetary, and credit policies and the onset of major negative supply shocks, stagflationary pressures are now putting the squeeze on a massive mountain of public- and private-sector debt. The mother of all economic crises looms, and there will be little that policymakers can do about it.” Nouriel Roubini

The U.S. Treasury yield curve has been deeply inverted for months. The yield curve has a very strong track record in predicting recessions with very few false positives over recent decades. There has NEVER been a U.S. recession that wasn't preceded by an inverted yield curve.  This chart says it all:

I believe the rally from October 12th (S&P=3576.94) is over. I’ve said that before, but now it’s far more technically clear.  The rally topped on November 30th (S&P=4080.10) with non-confirmations on several indexes, e.g., Dow Jones Industrials and Dow Jones Transports.

After a seasonal Santa Clause rally, likely ending in early January, the equity market should continue its decline.  So, another big down leg is going to happen from those levels.

Aside from the weakening economy, stocks are way over valued. Currently, the S&P P/E is 21, with earnings set to decline significantly in the year ahead.  My favorite over-valued barometer stock is Disney, which trades at $93.38 (low $86.75) and still has a P/E of 52.94!  With the horrible publicity due to its “woke policies+ and recent box office flops its P/E should be 15, in my humble view.

Stocks decline as corporate earnings decrease, especially when P/E’s are above average. So, in the onset of the “public finally believing” the economy is in decline, the equity markets will fall even if the Fed lowers rates. The difference is if the market is in a correction or a bear market.  We have been in a bear market since March/April 2022 if not earlier. Lower rates as earnings decline will not stop the decline in stocks in 2023.

Since the economy may experience far worse than a recession, bonds have made their lows. Normally, the Fed starts its change of policy by slowing down rate increases, then pausing and finally easing. The yield curve begins to revert to the norm from its inverted status when unemployment starts to increase.

According to most of the press releases, real estate is clearly in decline:

·        The US housing market’s deep freeze is likely to accelerate next year and result in the first year-over-year decrease in home prices in a decade, according to experts at real estate firm Redfin. The median U.S. home sale price is projected to fall 4% to $368,000 in 2023, according to Redfin’s forecast for the upcoming year.

I agree!  Real estate has big problems for now.

After the Sam Bankman-Fried fraud and FTX bankruptcy, it appears that the SEC will finally regulate this market. Crypto’s are “securities”, and that designation will end this sham.

Bitcoin has no insurer, thereby is considered a commodity. It will survive regulation for now.  Other Crypto’s will likely decline or even disappear in 2023.

Gold (along with bonds) will move higher for the same reasons. As the economy weakens materially, the Fed will do its one trick pony and start to ease.  Gold is inversely correlated with the U.S. dollar which seems to have topped.  As a result, I believe gold has made its lows for this cycle.

Most bulls have calling for a huge rise in silver for years… mostly because demand is much greater than new production. The problem is there are many sellers of silver from India and elsewhere who have scrap inventory.

However, I am bullish on silver, because the central banks are coming out with central bank digital currencies (CBDCs) [1.].

Note 1.  A central bank digital currency (CBDC) is the digital form of a country's fiat currency. A CBDC is issued and regulated by a nation's monetary authority or central bank.  As of March 2022, there were nine countries and territories that had launched CBDCs: The Bahamas, Antigua and Barbuda, St. Kitts and Nevis, Monserrat, Dominica, Saint Lucia, St. Vincent and the Grenadines, Grenada, and Nigeria.  There are 80 other countries with CBDC initiatives and projects underway.

CBDCs will make it possible for central banks to impose deeply negative interest rates and might prevent citizens from taking money out of banks. If that happens, there will be a huge demand for gold and silver coins.

Disclaimer:  I have owed these silver coins since 2015, and do not intend on selling them till silver goes over $100 at a minimum.  I’m also a long-term holder of gold in many forms.

Commodity Backed Currency Would be Very Bullish for Precious Metals:

The other major reason gold and silver may increase in price is if the BRICS (Brazil, Russia, India, China, and South Africa) create a commodity backed currency to compete with the U.S. dollar. The details are not final, but I believe it will happen in 2023.

The key element is the Saudi’s joining the BRICS and accepting payment for oil in other currencies. That would end Petro Dollar recycling.  It could cause the U.S. dollar to fall 30% in my view.

CBDCs and a new BRICS commodity backed currency will cause substantial weakness in the dollar and strength in Silver and Gold. (I am also a long term holder of Gold in many forms.

Commodities initially rose sharply during the first few months of 2022 but have corrected after the Fed started jumbo rate hikes.

The CRB Commodity Index made its high for the year on June 10th at +40.84% (without T-Bill interest included). The Fed started its 75-bps rate increase crusade shortly thereafter on June 15th.  The CRB has corrected almost 2/3rds of this year bull move and is now +14.43% YTD.

I am bullish on commodities for all the above reasons starting the end of next month.  I expect the Fed to then begin to see the light on the damage they have caused by jumbo rate hikes.

As long as we are on a fiat money standard “collectible” investments may be used to protect wealth. They include: Fine Art and Rare Colored Diamonds… Fancy Intense and Vivid Rare Colors: Blue, Pink, Green, Purple, Red and Golconda Diamonds. NOT WHITE DIAMONDS!

Like rare fine art, owners do not sell these for liquidity. Therefore, those stones are very stable when markets decline, and rise during inflation. They are diversified investments for very wealthy investors. They are not for traders or speculators.

Inflation, boom/bust cycles, governments increasing regulations and taxes via licenses all make the political privileged class wealthy, while destroying the middle class. Sadly, the U.S. political system has become a Kleptocracy and Thievocracy:

·        Kleptocracy is a government whose corrupt leaders (kleptocrats) use political power to expropriate the wealth of the people and land they govern, typically by embezzling or misappropriating government funds at the expense of the wider population.

·        Thievocracy means literally the rule by thievery and is a term used synonymously to kleptocracy.

One feature of political-based socioeconomic thievery is that there is often no public announcement explaining or apologizing for misappropriations, nor any legal charges or punishment levied against the offenders. 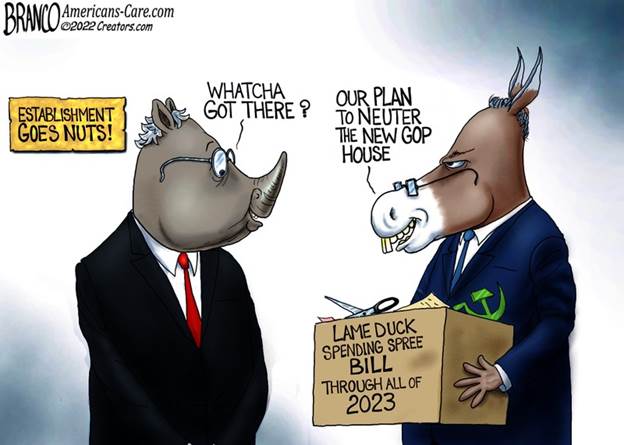 Note the GOP pig and the Democrat donkey!