Perspective on U.S. Inflation; 97 Year Analysis of the Fed and Asset Price Declines

In our goodbye/good riddance to 2022 column, we take a historical look at U.S. inflation and review how this year’s asset class price declines compare to history.

We find that besides 2022, there were only two other years where all asset prices dropped.  In 1969 (like 2022) it was due to the Fed’s attempt to curb rising prices.  A sidebar on 1931 notes that year’s all asset price declines were primarily due to faulty fiscal policies.

-->Please see our tagline year-end wishes for readers at the very end of this post.

While this past year’s inflation rate has been well above the Fed’s 2% target, it’s recently been on a downward trajectory.  The annual CPI in the U.S. slowed for a fifth straight month to 7.1% in November of 2022, the lowest since December last year, and below forecasts of 7.3% price increases.

Let’s compare inflation in 2022 with past time periods starting with WW II.

We observe that high rates of U.S. inflation resulted from wars and energy shocks/policies.  Here are a few examples of the CPI annual rate increases during such time periods:

More recently, the primary cause of inflation has been U.S. federal government spending [1.], that resulted in extraordinarily huge budget deficits which were monetized by the Fed (via numerous rounds of QE from Sept 2008 through March 2023).

Note 1. As an example of excessive and out of control U.S. government spending, consider the $1.7 Trillion Omnibus Spending Bill that just passed the House and Senate. In total, the regular 12 appropriations bills include $800 billion in non-defense funding, a $68 billion—9.3% over last year. This is the highest level for non-defense funding ever and a larger increase in both dollar and percentage than fiscal year 2022. The bills also provide $858 billion in defense funding. 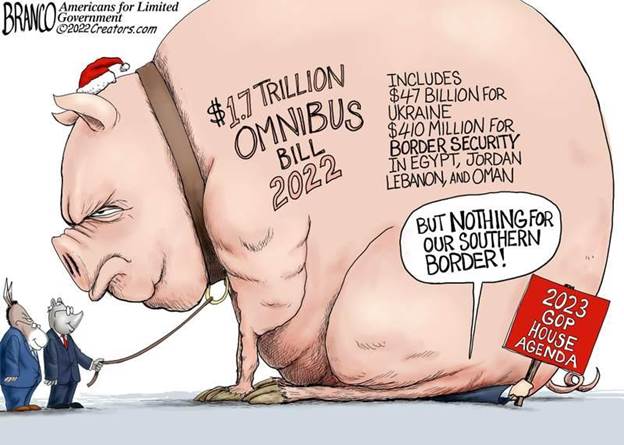 No one knows what the new “earmarks” are contained in it, but it appears that “earmark” totals more than 7,500 giveaways.

Raising interest rates will do little to stop inflation as rising prices are caused by increases in the money supply. What was meant by “slaying the inflation dragon” is in reality a bait and switch ruse from printing money to borrowing it.

The U.S. borrows money by selling U.S. government securities that result from humongous budget deficits which are financed at U.S. Treasury debt auctions.

99% of inflation is caused by UNLIMITED government spending that is funded by “printing money” which balloons the money supply.  Yes, shortages can occur, but they are usually created by economic Keynesian inflation policies… e.g., Biden’s green energy policy today and Nixon’s price controls and taking the U.S. off the gold standard in August 1971.

The U.S. government propaganda machine has done a masterful job in making the public believe RISING PRICES (rather than increasing the money supply) is what inflation is all about.

Any economist studying the subject knows that price increases are the direct result of increasing the money supply above the rate at which goods and services are produced. The Fed and U.S. government officials helped in creating ignorance among “the people” by their lack of education (please refer to End Quote below).

In my opinion, only two people ever discuss the honest truth on the subject of inflation on public TV. They are Prof. Steve Hanke of the Cato Institute and economist Peter Schiff.

“I have in my 30 years as an economist, strategist and portfolio manager NEVER seen any monetary tightening like this.” Mikael Sarwe via Twitter

In a misguided attempt to slow inflation since March 2022, the Fed has been trying to cause a decline in asset prices to stop people from spending (aka a “reverse wealth effect”).  That could cause a severe recession accompanied by sky high unemployment numbers.  This is criminal in my view, as most workers earning a living do not cause inflation!

Using Ibbotson Research data back to their beginning 1926 or now 97 years ago (including this year), there were only two years where the Fed’s response to rising prices was to drive ALL ASSET prices down.  Those were 1969 and this year (2022).

My call is for Silver to have a big year in 2023 as explained in this recent Sperandeo/Curmudgeon blog post.

Sidebar: 1931 and the Great Depression:

Note that while all asset classes were down in 1931 (during the great depression), that was primarily due to fiscal policy. In 1931 the money supply declined 20%, due to the largest increase in tax rates in American history (from the highest marginal rate in 1929 of 25% to 63% in 1931), and the Smoot Hawley Tariff Act passed in 1929 (which became effective in effective March 13, 1930).

So how deep was the Fed’s boot on the neck of the markets in 2022?  And the harm that did to the American People in its fool hardy attempts at slowing inflation?

While 2022 was not an economically terrible year, the declines in asset prices have been deep and across the board. The 97 year history of the markets shows this year was one of three worst overall, where almost all asset classes declined in price.

“It isn't so much that liberals are ignorant. It's just that they know so many things that aren't so.” Ronald Reagan

“Today, this old problem of citizen ignorance and its political role has been worsened by the expansion of the scale and scope of the federal government and its agencies over the last 75 years. Indeed, the complexity of the policies that federal agencies enforce and manage has made Wilson’s ideas about the necessity for government by technocratic elites a self-fulfilling prophecy.”  Bruce Thornton