After Fed chairman Jerome Powell’s comments at Wednesday’s post FOMC meeting news conference, one must question if the U.S. central bank has a hidden agenda. WHY? The actions of the Fed and non-stop hawkish talk of its members are so strange that they defy logic and reason.

How can the Fed continue to raise rates in 2023 with inflation declining, the economy weakening rapidly and a deeply inverted yield curve forecasting a serious recession?

Let’s examine the evidence, which comes from recent remarks by a current and a former FOMC member and Chairman Powell.

1. Current FOMC member and San Francisco Fed President Mary Daly said on Friday that she's not convinced that inflation may be cooling yet.  Really?

That’s after five consecutive declines in the CPI, with the highest year over year peak taking place six months ago at June at 9.1% YoY.  The CPI is now 7.1% YoY which is a 22% decline from its peak.

The PPI has also declined as we showed via a chart in last week’s column.

Yet Ms. Daly says Fed rate increases “have a ways to go,” meaning they will continue throughout 2023. What’s up with that?

Speaking virtually at the American Enterprise Institute, Ms. Daly (a PhD economist) said the key to bringing down inflation is re-balancing the labor market to bring wage growth down.  That goes back to the 14th century “the world is flat” theory or invoking the Phillips Curve [1.] employment vs inflation relationship which was long ago discredited.

Daly, like other Fed officials, says she thinks the unemployment rate will need to rise to about 4%, or slightly higher, to restore balance in the job market. She says wage growth is still running around 4 1/2% to 5% and needs to come back down to 3 1/2% to 4%. Daly says that means higher (Fed Funds) rates held longer.

Therefore, she is a true Phillips Curve believer who is saying that more people must lose their jobs and workers need lower wages…to stop inflation!

Note 1. The Phillips Curve is an economic theory that inflation and unemployment have a stable and inverse relationship. Developed by William Phillips, it claims that economic growth results in inflation.  This was dis-proven with empirical evidence during the 1970-1981 stagflation when there were high levels of both inflation and unemployment.  The U.S. unemployment rate went straight up with the huge inflation of the 1970’s to early 1980’s (from 3.90% in January 1970 to 10.80% in December 1982.

Victor’s Opinion: With absolute certainty, Daly is applying a 100% incorrect, widely discredited theory as justification for the Fed to keep raising rates!

For the benefit of Ms. Daly, I quote Mark Twain: “It is better to keep your mouth closed and let people think you are a fool than to open it and remove all doubt.”

“If financial conditions ease because markets price in [2023] cuts, a peak policy rate of 5.25% may not be sufficient to put inflation on a path to return to 2% over time.”

This is a unique threat from a former thief and FOMC member, which effectively warns, “if you dare buy stocks in the future, we will have to raise rates more than our original plan.”

3.   And from the “BIG BOSS” who parrots this type of “statism” rhetoric: Fed Chair Jerome Powell said at the Brookings Institution on November 30th:

“We do not want to over-tighten, because we think cutting rates is not something we want to do soon.  However, if financial conditions ease (MEANING IF STOCKS AND/OR OTHER FINANCIAL ASSETS RALLY), a peak policy rate of 5.25% may not be sufficient to put inflation on a path to return to 2% over time.”

Powell would not answer one important question asked of him: “What if Stagflation occurs?”  Powell’s answer: “I don’t like to deal in hypotheticals.” That’s despite the evidence that Stagflation has characterized all of 2022!

Here’s a comment the Curmudgeon and I wholeheartedly agree with:

Wharton Emeritus Professor and Wisdom Tree Sr. Investment Advisor Jeremy Siegel is not happy with the Fed's hawkishness which was telegraphed at Wednesday's FOMC meeting. Siegel said the Fed is contradicting itself as it focuses on crushing wages that are spiking due to supply side issues. Siegel ultimately expects that the Fed will be cutting interest rates in 2023, not raising them.

"Now he's saying there's supply-side problems in the labor market that may raise wages, and we have to crush the wages in order to stop inflation. That's just totally inconsistent as a part of monetary policy," Siegel told CNBC on Thursday. "The Fed is not supposed to act on structural shifts on supply-side problems."

There are multiple risks associated with the Fed’s continuing its rate rising rhetoric into 2023:

1. “Something breaks” in the sense of a 2008-style meltdown of the financial system or the credit markets freezing for an extended period.

2.  A global stock market crash triggered by the fear of a very serious recession (or depression as Victor has forecast) due to rate hikes while the economy is declining.  That could be followed by an epic economic collapse.

Even if the Fed can rescue the financial system from a crisis, it can’t simultaneously fight a financial crisis and inflation.  The likely result would be an immediate stop of rate hikes and QT with new rounds of QE to follow.

Victor has opined for years that’s the end game with hyperinflation to follow.

What Could be the Fed’s Hidden Agenda?

Welcome to the Fed’s version of the Gestapo! The Fed’s actions and talk are too crazy to be normal, IMHO.

Raising rates seven times since March 2022; four consecutive 75 bps rate hikes as the CPI was declining; non-stop talking down markets with threats of more rate hikes for longer --- all while the Fed’s 2023 GDP and unemployment forecasts have worsened?  Nothing like that has ever been done before by ANY central bank!

Powell has acknowledged that aggressively raising interest rates would bring “some pain” for households but that doing so is necessary to crush high inflation.  How much pain is enough?

That brings us to what might be the Fed’s hidden agenda?  Just a guess, but it could be to crush the economy and make people more dependent on U.S. government handouts.  That would facilitate total government control of what used to be the middle class.

In the 12-month M2 chart below, we can clearly see money supply growth DECLINING since March when the Fed first started raising rates:

If the Fed still believes in the Phillips curve and does not realize that excessive money supply growth (like in 2020-21) causes inflation, the U.S. central bank is doomed.  It will never be able to get the economy back to normal.

In other words, there is no hope for the Fed, because it seems to have no idea what it is doing and the damage to the economy (and markets) it has caused and will cause.

Boom and Bust cycles are built in by the Fed’s ignorance of how the monetary system works. 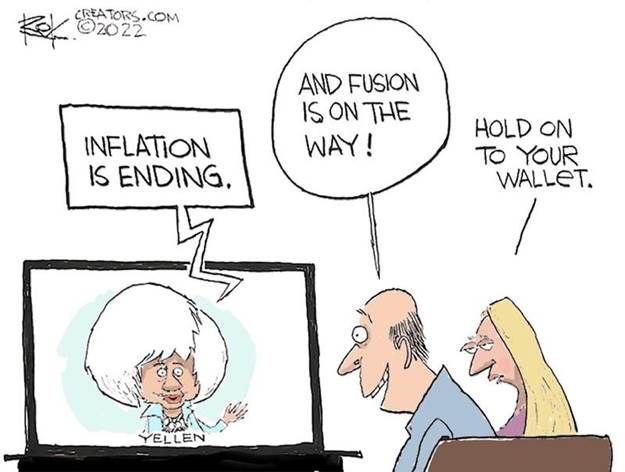 Be well, stay healthy, do things that make you feel good but don’t harm others. Wishing you a happy holiday season, peace of mind and contentment. Till next time………