U.S Economy Not as Strong as November’s Jobs Report Suggests

We take a close look at Friday’s BLS jobs report which once again overstates the strength in the labor market.  Next, we provide five reasons the U.S. economy is not nearly as strong as the government wants you to believe.  BofA then weighs in with its comments on the Fed and markets.

Finally, we wonder why today’s financial markets rally after a repeat of the same news or announcements.  Is the stock market still a discounting mechanism?

The BLS said on Friday that non-farm payroll employment increased by 263,000 in November, and the unemployment rate was unchanged at 3.7%.

Why would they do this?  Apparently, strong jobs numbers provided cover for the Fed to raise rates at every FOMC meeting from March 2022 to date.

It is normal for SA jobs to increase from August till November because those are high retail selling months (i.e.  Back to School, Halloween, Thanksgiving, and the Christmas shopping).

Following the holidays, in late December and January, workers get fired or laid off.  Last January, 2,846,000 workers were fired! However, the BLS showed +504,000 had been created!

It’s all smoke and mirrors to allow U.S. federal government to manipulate the jobs numbers for political purposes.

-->Yet, no one in the mainstream media EVER TELLS THE PUBLIC THIS!  Why not?

U.S. Labor Market and Economy Not So Hot:

Here are the reasons that U.S. jobs and economic strength are over-stated:

1.  BDM numbers are fake! The BDM suggests that NEW BUSINESS start-ups (net of closings) created 1,397,000 jobs in 2022 to date or an average of 127,000 jobs per month.  How can that be possible when small businesses have been getting devastated?

I would estimate that new businesses had net closings not openings! Therefore, the BDM really should show negative jobs created! Also, these numbers don’t add up considering the huge inflation increases this year.

2. You Think The Labor Market Is Hot? Think Again.  The labor market holds the key to the Fed stance in 2023.

In this Macro Compass article, the author states:

If you look deeper, you realize the current state of the US labor market is far from ‘‘hot.’’ Job creation is clearly trending down, alternative real-time and forward-looking labor market indicators point to a sharp deterioration ahead and statistical inconsistencies are artificially boosting non-farm payrolls to the point the US government reached out to ask if I could help them look into it.

The author then offers a thorough assessment of the official Bureau of Labor Statistics (BLS) latest data on the Non-Farm Payrolls (NFP) released on Friday and why it greatly overstates the strength in the labor market.

“A statistically significant survey requires a very large amount of respondents.” Well, the last NFP Establishment survey got the lowest response (49%) in 20 years!

3. Add the huge tech layoffs (Meta/Facebook, Amazon, Twitter, Cisco, etc.) and hiring freezes and you have a very unbelievable scenario for job strength.   The layoffs come as digital advertisers have and will continue to cut back on spending and rising inflation curbs consumer spending.

4.  It should also be noted that M2 (money supply) has decreased by -1.1% this year through October.  That’s a very rare event and will likely cause much lower or even negative GDP growth next year.

5. The widely followed Atlanta Fed GDP NOW estimate for real GDP growth (seasonally adjusted annual rate) in the 4th quarter of 2022 is 2.8% as of December 1st, down from 4.3% on November 23rd.  Also, the average of the 10 blue chip economists estimate a -0.75% decline in GDP this quarter.

BofA Global Research on the Fed and Markets:

“One single factor can explain 93% of the variation in stocks, bonds, currencies, credit, and volatility this year - the Fed policy stance. This implies that the developing Fed pivot alone explains so much of the recent performance.

Ralph Axel and the BofA Rates Research team suggest markets may be wrong to think that there will be just one pivot in this cycle, as the Fed may repeat the stop-go mistakes of the last inflation fight.

The high cost of job losses (in 2023) means that it may be difficult for the Fed to reach an appropriately restrictive stance, especially with the new focus on policy lags. In the 1960s, the Fed eased after periods of rising unemployment, only to hike again and then ease again.

We think the Fed could repeat these same mistakes and the upside for investors is that this could create opportunities to fade the pivot points after they have run their course.”

Markets Rally on Repeat of the Same News:

In a speech on Wednesday, Fed Chairman Powell reconfirmed that smaller rate increases are likely and might begin in December.  That only reinforced his earlier remarks (and the Fed dot plot) of stopping the jumbo 75 bps rate increases at the December FOMC meeting, where a 50-bps rate hike had been widely expected. Stock and bond markets rallied strongly (the NASDAQ was up more than 4%) like Powell’s remarks were a surprisingly new announcement.

Up till recently, markets have discounted news or announcements only once.  Yet today’s markets continue to rally over and over on the same repeated announcements.

This is very puzzling for the Curmudgeon and I, whom have been involved in markets since 1966! Combined, we have over 110 years of experience!

In a recent Curmudgeon blog post I stated that, “A depression is not as clearly defined as a “recession.” It is based on a longer period of zero or negative economic growth and a much higher unemployment rate.” And that was going to be the consequence of the Fed completing their goals of raising rates and lowering their balance sheet.

Government and its agencies try to make the news look good so that the politicians in power stay in power. They have done an incredibly good job of fooling the public.  We try to debunk that trickery in these Curmudgeon blog posts.  Please let us know what you think about our mission!

Is the current U.S. administration run like a 3-ring circus? 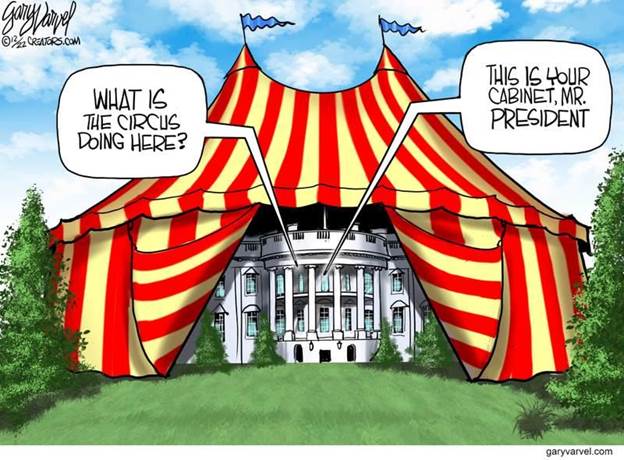 “Just because something isn't a lie does not mean that it isn't deceptive. A liar knows that he is a liar, but one who speaks mere portions of truth in order to deceive is a craftsman of destruction.” ― Criss Jami