Lots of important topics to cover this week. We hope you find them informative and enlightening.  Please let us know.

Aftermath of the November FOMC Meeting:

During his Wednesday afternoon November 2nd press conference, Fed Chairman Jerome Powell could not have said anything worse for the markets.  His key words were “Talk of a pause in the central bank’s tightening efforts is premature.”

Other Powell remarks like, “More rate increases may be needed then what was indicated,” also added to the declines. In other words, rate hikes of 50 bps (or more) in December and continuing into the 2023? 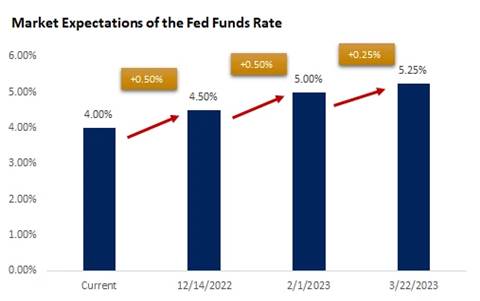 BofA’s U.S. economist Michael Gapen forecasts that the Fed will lift its policy rate by 50bps in December. He then expects another 50bp hike in February, followed by a 25bp hike in March for a terminal rate of 5-5.25%, which is 25bps higher than his previous estimate. BofA continues to expect a hard landing for the U.S. economy in the first half of 2023 followed by rate cuts starting next December.

I have stated in several previous Curmudgeon blog posts (and remain of the belief) that if the Fed executed its planned non-stop jumbo rate rising policy (combined with a larger QT since September) it would cause a depression.  The U.S. has been in a recession since the beginning of this year so continued tightening will be disastrous for the economy.

A depression is not as clearly defined as a “recession.” It is based on a longer period of zero or negative economic growth and a much higher unemployment rate.

Let’s use an example on how we might get there:

Small businesses in various states are struggling to pay their rent, a new report shows, with rent delinquency at nearly 40 percent this month.  The findings, published Tuesday by Boston-based business tracker Alignable, are raising more than eyebrows, as they illustrate the stark effect inflation is having on everyday Americans.

The survey of 4,789 randomly selected small business owners saw more than half of respondents say their rent is at least 10 percent higher than six months ago.  If you go back seven months, the majority said their rents had increased by at least 20 percent.

Moreover, the study found that roughly 37 percent of small businesses - almost half of all Americans working in the private sector - were left unable to pay rent in October.  Compounding concerns is the fact that several states, including New York and California, are well over the already-high national average.

-->If small businesses die en masse, we will have a depression.

Powell made another disturbing and naive comment on Wednesday afternoon.  He said the Fed would rather “over tighten than keep rates too low,” adding that the Fed has the tools to fix over tightening later.  What Powell means is that the Fed can lower rates and do another round of QE, which would cause the markets to rally.

True, but if you put many companies out of business (via continued jumbo rate hikes and QT) the economy won’t grow.  Once a company is out of business with its capital gone, it is very difficult (if not impossible) to raise new capital as banks won’t lend and markets won’t accept new debt or equity offerings.

Review of the Markets:

After the BLS employment report on Friday, the U.S. dollar declined 1.8%, Gold rallied 2.8%, and Copper was up 7.6%.  Some say it was due to rumors of China ending its COVID induced lock downs.  We’ll see if this rumor has merit.

I believe Gold should start to move higher if the Fed continues to raise rates without decreasing money supply growth.

The equity market has done better than the debt markets this year. Lance Roberts at RIA Advisors LLC said in a November 5th  interview with Wealthion that bonds have performed the worst since 1788! I concur. Why?

It’s because companies can raise prices to protect earnings so that higher interest rates (costs) can be passed on to customers.  Hence, corporate earnings and stock prices don’t crash like bonds have done in 2022.

If big companies cannot raise prices earnings will decline along with stock prices.

Here’s a recent example of cost pass through to consumers:

“Chicago-based McDonald’s (MCD ticker symbol) freshly appointed CFO — Ian Borden — said on a Thursday October 27th earnings call that prices at its restaurants in the U.S. rose just over 10% in the third quarter from the year-earlier period, with roughly the same gains expected in the U.S. for the full year. The higher menu prices helped offset inflation, boost average check size, and drive the company’s U.S. comparable sales up more than 6.1% in the quarter from the year earlier, while global comp sales increased 9.5%, according to company executives on the call and the company’s third quarter earnings release. Net income in the quarter declined to $1.9 billion from $2.14 billion year-over-year and the company said the quarter’s results were negatively impacted by the weakening of major currencies against the strong U.S. dollar.”

We hope you see the point:  Bond prices decrease on higher interest rates as the new yield mathematically adjusts to current yields.

Stocks are less affected by higher interest rates if prices (for goods and services) are raised to offset rate increases. That is why the industrial stocks in the DJIA (which have pricing power) have held up so well.

The Fed has hardly touched corporations balance sheets with higher rates or QT.

Consumer credit is rising, and savings are declining as people must buy the necessities. Big corporations win in this environment.  Consumer discretionary companies lose.

The FAANGs (Facebook, Amazon, Apple, Netflix, and Google) and other high P/E tech stocks are adjusting to higher interest rates.  A forward P/E of 40 might be justified on some strongly growing companies with zero interest rates, but not with a 4.5% T-Bill rate during a recession!  For example, the Ark Innovation Fund (AARK) is down 64% this year and has declined 77% from its all-time 2/15/21.

If the Fed curbs money supply growth, bonds should do well relative to stocks as the economy would weaken further and corporate profits decline. 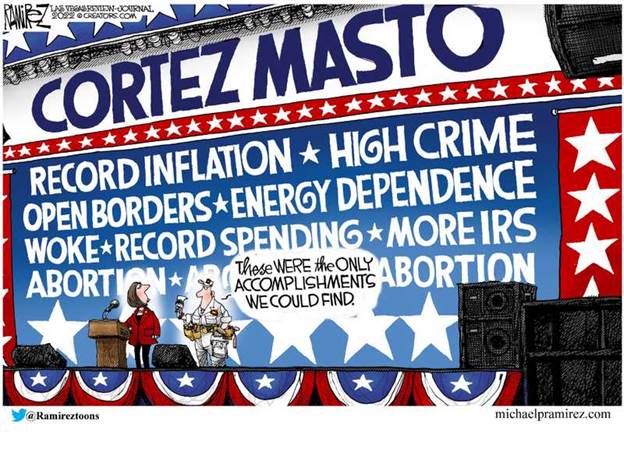 We don’t usually comment on politics, but a few words are appropriate here as the markets will be affected by the outcome of the November 8th U.S. elections.

Projections are for the Republicans to take back the House by 25 seats. I’m more in the camp of 50 GOP seats gained. The Senate is also going to flip to the GOP and my assumption is by four or more seats.

There will also be gubernatorial elections in 36 states and 3 territories, with 31 incumbent Governors.  Politico forecasts 17 states are either leaning, likely or solid for the GOP.

That outcome will put a great deal of pressure on the Fed as Democrats will be blamed for their election losses.

My assumption is based on a relatively honest election.  We certainly hope so!

Be well, stay healthy, try to cope with the financial havoc the Fed has created. Wishing you peace of mind and contentment. Till next time………