In last week’s column we noted that political corruption was a major growth area in the U.S.  In this post, we examine the FTX crypto-exchange scandal as the latest example of personal and company corruption with an added dose of fraud and theft.

-->This maybe a scam on the level or possibly greater than Bernie Madoff’s Ponzi scheme or the Enron fiasco.

The now bankrupt FTX is where many crypto investors traded and held their cryptocurrency, similar to the New York Stock Exchange for stocks. It was founded by Sam Bankman-Fried (SBF) who is also the founder of Alameda Research, a hedge fund that traded and invested in cryptocurrencies and crypto companies.  Since founding FTX in 2019, SBF had control of a maze of 134 different companies in his “fiefdom.”

Within the traditional financial sector, FTX and Alameda Research would be separate firms entirely or at least have divisions and firewalls in place between them. But in early November 2022, news outlets reported that a significant proportion of Alameda’s assets were a type of cryptocurrency released by FTX itself.

A few days later, news broke that FTX had allegedly been loaning customer assets to Alameda for risky trades without the consent of the customers and issuing its own FTX cryptocurrency (called “FTT”) for Alameda to use as collateral. As a result, criminal and regulatory investigators began scrutinizing FTX for potentially violating securities law.

That led to a “bank run” on FTX as large crypto investors and individuals began to sell off cryptocurrency held on FTX’s exchange.  FTX quickly lost its ability to meet customer withdrawals and halted trading. On Nov. 14th FTX was also hit by an apparent insider hack and lost $600 million worth of cryptocurrency.  That same day, FTX, Alameda Research and over 130 other affiliated companies founded by SBF filed for bankruptcy.

That action may leave more than a million suppliers, employees and investors who bought cryptocurrencies through the exchange or invested in these companies with no way to get their money back.

On November 23rd, the Wall Street Journal reported that a substantial amount of FTX’s assets were either missing or stolen. A lawyer for the failed crypto exchange said in court that potentially billions of dollars in funds passed through FTX, which he called the “personal fiefdom” of Mr. Bankman-Fried.

Customers’ funds on the exchange are frozen, and they’re losing hope they will ever get much if anything back. The size of the gap between FTX’s obligations to its customers and available assets it could use to help pay them still isn’t known. Individual and institutional customers number in the millions. The 50 largest creditors alone are owed more than $3 billion, court papers show.

Venture Capital (VC) investors piled roughly $2 billion into FTX amid last year’s boom in crypto investment. Eager to get into the hot startup, they overlooked traditional corporate controls such as external board oversight that are typical for such large investments.  Please refer to Sequoia Capital’s $150 million FTX write-off described below.

“FTX was in the control of inexperienced and unsophisticated individuals, and some or all of them were compromised individuals,” said James Bromley, counsel to FTX’s new management, at its first appearance in Delaware bankruptcy court after filing the largest-ever crypto chapter 11 case earlier this month.

John J. Ray, the restructuring specialist who replaced Mr. Bankman-Fried as CEO of FTX and helped oversee some of the biggest bankruptcies ever including Enron’s, said in a filing that he had never seen “such a complete failure of corporate controls and such a complete absence of trustworthy financial information as occurred here.”

“From compromised systems integrity and faulty regulatory oversight abroad, to the concentration of control in the hands of a very small group of inexperienced, unsophisticated, and potentially compromised individuals, this situation is unprecedented. There is no paper trail.”

The iconic VC firm Sequoia Capital apologized to its fund investors for the $150 million it lost on its FTX investment. Sequoia, an early backer of Apple Inc., Alphabet Inc.’s Google, and Airbnb Inc. is seen as the gold standard in the venture industry for its high investment bar. Earlier this month, Sequoia wrote off its entire investment in FTX—one of the largest investments in the company by a venture-capital firm.

Where Was the Due Diligence?

Major professional investors in FTX did not do proper due diligence.  For example, Paradigm Capital invested $278 million, Temasek $275 million, Sequoia Capital $214 million, SoftBank $100 million, Ontario Teachers $95 million, BlackRock $420 million, Tiger Global, $38 million.  There were many other large investors in FTX that will be forced to write-off their entire investment in the bankrupt firm.

The SEC has issued guidance on what to look for in potential Ponzi schemes including “guarantee of returns or unregistered investment vehicles.”  Why wasn’t that guidance followed by FTX large investors?

Investors deposited cash to buy FTT with an 8% yield, but the money was kept on the FTX exchange (not in a cold wallet).  Bankman-Fried loaned the FTT cash value to his Alameda Research hedge fund where the money disappeared.

This begs the question why hasn’t Bankman-Fried been arrested or at least summoned to court for questioning?

At long last, committees in the U.S. House of Representatives and Senate have scheduled hearings next month on FTX’s collapse, with Bankman-Fried as a potential witness.

What Is a Ponzi Scheme? 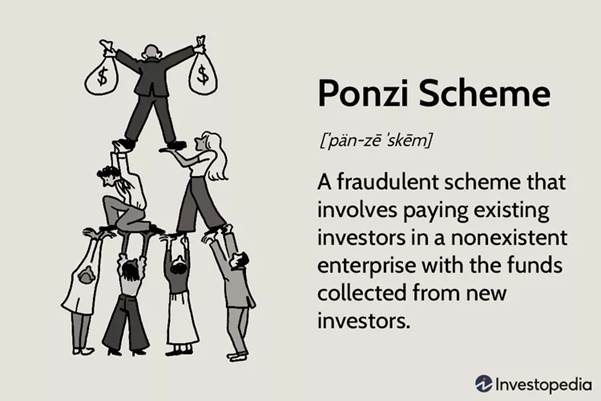 The key INNOVATION in this scam/fraud is that Bankman-Fried bought political cover (see Sidebar: FTX Donations to PACs below) in the highest places. He also used Hollywood and major sports names to promote his reputation and FTX/FTT.  Indeed, the buying of mass political cover is the interesting part of this story.

FTX, its executives and its philanthropic arm spent or pledged hundreds of millions of dollars in political and charitable contributions, consulting fees, investments in media outlets and even real estate.

A network of political action committees (see Sidebar on PACs below), nonprofits and consulting firms funded by FTX or its executives worked to court politicians, regulators and others in the policy orbit, with the goal of making Bankman-Fried the authoritative voice of crypto, while also shaping regulation for the industry and other causes, according to interviews, email exchanges and an encrypted group chat viewed by The New York Times.

FTX blurred the lines between corporate affairs and political activity and prompted concerns among some involved about whether the money was being spent effectively and in compliance with strict campaign finance laws, while leaving some potential beneficiaries feeling like there was a quid pro quo.

“It was relentless and all-encompassing,” said Dennis Kelleher, the president of Better Markets, a nonprofit that fights for more regulation of financial firms.

What has now turned into a farce is Bankman-Fried’s invitation to speak at the NY Times Dealbook Summit on November 30th in New York city. “I’ll be speaking with [Andrew Ross Sorkin] at the @dealbook summit next Wednesday (11/30),” SBF tweeted on 11/23.

SBF’s tweet got a great number of harsh responses with people asking why the former FTX CEO was allowed to speak at such an event.  For example:

So not only is this man not going to jail, but he is also being positioned as a distinguished speaker!

That’s beyond outrageous and insolent.  It’s a kick in the groin to the over 1 million investors that lost ~8-to-10 billion due to FTX fraud!

FTX contributed to a super-PAC fighting for control of the Senate in the November 2022 midterm election just days before the company’s collapse.   The Senate Leadership Fund, which is aligned with Senate Republican Leader Mitch McConnell and was the top spender in the 2022 midterms, received the $1 million donation on Oct. 27, according to its most recent filing with the Federal Election Commission.

FTX – U.S. also gave $750,000 to the Congressional Leadership Fund and $150,000 to the American Patriots PAC, both of which supported House Republican candidates. It gave $100,000 to the Alabama Conservatives Fund, which backed Republican Katie Britt’s successful run for the state’s open Senate seat.

Also alarming is that FTX, the parents of its founder and   CEO, and top executives of the insolvent cryptocurrency exchange have bought at least 19 properties worth nearly $121 million in the Bahamas over the past two years, Reuters reported, citing property records.

Separately, attorneys for FTX said on Tuesday that one of the company's units spent $300 million in the Bahamas buying homes and vacation properties for its senior staff. 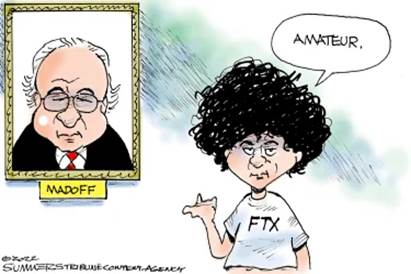 This is a very complex story with lots of theories of events that are hard to believe.  Therefore, it’s best to let it play out before any speculation on the conclusions. To me it is a reflection of how the U.S. has deteriorated in the rule of law, the morals of society, and the absolute crashing of our culture.

As I have said many times in these posts, America is in dire decline.

“Every blockhead is thoroughly persuaded that he is in the right, and everyone who is all too firmly persuaded is a blockhead, and the more erroneous is his judgment the greater is the tenacity with which he holds it.”