After years of ultra-easy monetary policies (ZIRP and QE+), the Fed has approved four consecutive 75 bps rate hikes in 2022 and markets widely expect the December FOMC meeting to result in a 50-bps point increase.  Instead of restricting future Fed policy talk to meetings, Fed members continued their hawkish drumbeat this week.  We review what they said and offer our comments and analysis in this blog post.

Next, we examine political corruption via insider trading by government officials, especially by Nancy (and Paul) Pelosi.  Please let us know what you think about that!

St. Louis Federal Reserve President and FOMC voting member James Bullard said on Thursday that the U.S. central bank still has a lot of work to do before it brings inflation under control.

“Thus far, the change in the monetary policy stance appears to have had only limited effects on observed inflation, but market pricing suggests disinflation is expected in 2023,” he stated.

His presentation suggested that 5% could serve as the low range for the where the funds rate needs to be, and that upper bound could be closer to 7%.  “The Federal Reserve’s benchmark interest rate may need to rise as high as 7% to put downward pressure on inflation,” he said.

-->A terminal policy rate of 7% is totally inconsistent with current market pricing, which forecasts the Fed Funds rate topping out around 5% by mid-2023.

Bullard’s warning came as a bit of a shock! His ridiculous comments come from a man who will not be a FOMC voting member next year.  In the mafia, they’d call him a “hit man” that wants to “take out” (kill) markets.

Several portfolio managers said on Fox Business that Bullard should “resign and go start a hedge fund.”  I have to concur.  His comments were as reckless as any Fed official has ever been!

Bullard’s remarks follow statements from many other Fed officials expressing the need to keep up large and frequent rate hikes to quell inflation.  For example, Federal Reserve Governor Christopher Waller cautioned earlier this week a smaller-sized rate hike does not mean officials are close to a pause.

"These rates are going to stay — keep going up — and they’re going to stay high for a while until we see this inflation get down closer to our target," Waller said Monday at a UBS Group AG conference in Australia. "We’ve still got a ways to go. This isn’t ending in the next meeting or two."

Loretta Mester, president of the Cleveland Fed, echoed some of Bullard’s remarks in her own speech Thursday, when she said the Fed is “just beginning to move into restrictive territory.” That suggests Mester, one of the more hawkish policymakers, also expects rates will have to move much higher.

-->Bullard and other Fed officials continue to make these kinds of hawkish comments whenever the markets are rallying, which the Fed obviously wants to kill because they’re trying to achieve a “reverse wealth effect” by making people poorer.

The CPI finally declined more than expected in October to 7.7% YoY as per the last report, so why make these thoughtless, irresponsible statements?

It’s because the markets rallied after the CPI report, which the Fed thinks is hurting their inflation fighting goals.

A rally in stocks with all asset classes still down double digits in 2022 will not cause people to run out and bid up the price of goods and services which are components of the CPI.  To think otherwise is insane!

As we’ve stated many times in these posts, Money Supply growth (positive or negative) is a precursor of inflation (rising prices).  M2 has declined -1.1% in 2022 through October. So, expect the CPI to be lower next year.  It might even be reduced to 3 to 4% in 2023.

The Fed has overdone the rate increases this year which has caused all asset classes to post out sized negative returns.  If they execute the plan they’ve outlined, along with the decrease in their balance sheet (via QT), I believe the economy and markets will become a lot worse.  The recession will deepen, unemployment will rise, and markets will tank.

Thanks to Bullard, the intermediate stock market uptrend is over.  At this time, I believe all three trends (short, intermediate, and long term) are now headed down.

Political Corruption as a Growth Industry:

Where is the growth coming from in the U.S.?  It’s not from the economy and markets!  Sadly, the growth areas in the US are: Crime, Welfare, Homelessness and Political Corruption.

Corruption in the United States is apparently at its worst in almost a decade, according to a new global report released Thursday by Transparency International. Advocates attribute the drop to declining trust in democratic institutions and poor oversight of pandemic-related financial aid.

In the annual Corruption Perceptions Index (CPI), the United States fell to a low of 67 out of a maximum possible score of 100, down from a high of 76 in 2015. The lower the score, the worse the corruption.

What’s not so well known is that her net worth has increased by a staggering $140 million since the 2008 financial crisis.  That was primarily due to her husband’s fortuitous stock trades in companies she has worked to subsidize.

Repeated allegations are that Nancy’s husband, Paul Pelosi, trades stocks and options on inside information gleaned from her position in Congress.

A previous analysis from Business Insider estimated that the Pelosi’s are worth at least $46,123,051, making Nancy Pelosi one of the 25 richest members of Congress. The vast majority of the couple's wealth is derived from stocks, options, and investments made by Paul Pelosi.  Specifically, this year:

·        In March, Paul Pelosi exercised options to buy up to $5 million worth of Tesla stock as Nancy pushed for electric vehicle subsidies.

·        In June, he exercised call options to buy up to $5 million in the semiconductor heavyweight Nvidia just weeks before the House considered a bill to provide more than $50 billion in subsidies to domestic semiconductor companies.

·        In September, he “exercised seven-figures worth of Alphabet… options days before” Congress introduced a bill prohibiting such activity.

You can see all of the trades reported by Speaker Nancy Pelosi in 2021 and 2022 here.

"Tonight, it's official: One-party Democrat rule is FINISHED. We have fired Nancy Pelosi," wrote California Rep. Kevin McCarthy (the leading contender to be House Speaker in 2023) on Wednesday night, after the GOP won 218 House seats which gave the control of the House of Representatives.

Here’s our cartoon of the week: 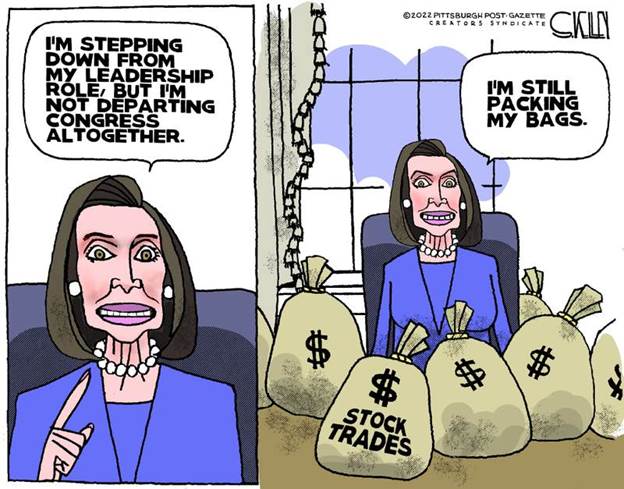 Many U.S. Officials Trading Stock on Inside Information:

Pelosi is not alone in stock market insider trading.  In early October, the Wall Street Journal published an investigation that revealed a troubling trend of federal officials in regulatory agencies trading stocks of companies they oversee. In September, the New York Times reported that at least 97 current members of Congress are suspected of using insider information to buy and sell stocks from 2019 to 2021.

A widespread issue, these activities are taking place in some of the most consequential entities of the U.S. Executive branch.

Over two hundred officials at the Environmental Protection Agency (EPA) and over a quarter of officials at the Department of Defense (DoD) made investments in companies that their employers regulate.

Of great concern is that the average proportion of officials who filed public financial disclosures that traded stocks in companies they regulated approached 25%, a number that implicates hundreds of people.

Several news organizations have identified 75 members of Congress who've recently failed to properly report their financial trades as mandated by the Stop Trading on Congressional Knowledge Act of 2012, also known as the STOCK Act.

Congress passed the law a decade ago to combat insider trading and conflicts of interest among their own members and force lawmakers to be more transparent about their personal financial dealings. A key provision of the law mandates that lawmakers publicly — and quickly — disclose any stock trade made by themselves, a spouse, or a dependent child.  Yet that’s not being done!

Such insider trading represents a serious conflict of interest as the officials can make decisions that benefit their bottom line rather than the people. These agencies have ethics standards regarding such conflicts, but the Journal explains that they were either waived or they complied with the standards due to exemptions.  Yet none of the people involved were prosecuted!

“We need to talk about government officials and stock trading, and we need to talk about it now. If we don’t, we risk putting public confidence and trust in a free and fair market on the line.” by David McDonough, founder and CEO of Commonstock, a social platform dedicated to improving the world's investing knowledge, backed by hedge fund managers Bill Ackman, Dan Loeb, Stanley Druckenmiller, Coatue and QED.

Be well, stay healthy, try to find interesting diversions. Wishing you peace of mind and contentment. Till next time………