“Goldilocks” August Jobs Report Not That Hot Up Close

We examine the BLS August jobs report in light of “the tooth fairy” and the dichotomy of many jobs added without any IPOs.  Is the U.S. economy as strong as pundits claim?

Next is a stark analysis of what a serious recession would mean for the U.S. government and employment.  We conclude with an analysis of the G7’s Russian oil price cap, which could result in shortages and a decline in the U.S. dollar.

We thank readers for their comments last week. Please let us know what you think of our work (email the Curmudgeon: ajwdct@gmail.com).

Friday’s BLS Non-Farm Payroll/Unemployment report for August was initially greeted with a chorus of “Goldilocks” accolades. That’s because the report was not too hot (many jobs created) and not too cold (unemployment rising strongly). Investors evidently forgot that “Goldilocks and the Three Bears” didn’t really have a happy ending.  Neither did Friday’s equity markets!  The rally after the jobs report fizzled with all major averages closing lower.  For the week, the DJI was down 964.96 points or 3%, while the S&P 500 fell 3.3%, and the NASDAQ Composite dropped 4.2%.

While the U.S. economy added 315,000 jobs in August, a bit more than the 300,000 economists forecast, the unemployment rate ticked up and the number of people in the labor force both increased, while wages grew at a slower-than-expected pace.  The U.S. economy has now added jobs for 20 consecutive months.

The Morning Brew wrote: “Stocks suffered their third weekly loss in a row because, despite August’s “Goldilocks” jobs report, investors still believe the Fed will crank interest rates much higher at its next meeting.”

If the economy has been doing so well, why has there been a drought of IPOs?  As of Friday, it’s been over 100 days since Wall Street’s last IPO for over $25 million. This surpasses the previous longest stretch on record since 2008.

Yet in the last three months 482,000 jobs were “created,” just from the BDM formula created in the early 1980’s.  One would assume many of those new jobs would be at start-ups that wanted to go public to provide an exit for their private investors.  But that didn’t happen due to “unfavorable market conditions” which is not characteristic of a strong economy with many jobs added!

Also on Friday, U.S. bond prices increased, but Corporate Bonds were flat. That’s likely due to cautiousness over default risk which is yet another sign that the U.S. economy is not as strong as cheerleaders say it is!

Recession Will Cause U.S. Deficits and Debt to Skyrocket:

“The door is still wide open for the Fed to keep moving, and we also think this keeps the potential for a 75-basis-point [0.75%] rate hike at the September meeting still on the table,” writes Rick Rieder, BlackRock’s chief investment officer of global fixed income.

In his Jackson Hole keynote speech, Fed Chairman Jerome Powell indicated he does not care about a recession.  “Pain will be the price of bringing down inflation,” he said.  Yet the costs of that pain will be enormous for the U.S. government.

Therefore, a recession will not only bring about higher deficits, but significantly higher unemployment.  That will result in less tax receipts and more Fed debt financing by printing/monetizing the increased debt.  Of course, such monetary inflation is perfectly OK to Modern Monetary Theorists [1.], until it causes price rises like the U.S. (and rest of the world) had just experienced!

Note 1. We’ve previously explained that the result of all this QE/MMT will be hyperinflation.  Please refer to: End Game for U.S. Debt Spiral: Hyperinflation, MMT.

In this scenario, lower inflation (price increases) from a recession will cause more monetary inflation which will result in higher prices across the board.  This appears to be the logic of an Abbott and Costello “comedy routine.”

Because the U.S. is already in recession, additional raising of the Fed Funds rate to 4 +%, combined with planned QT of $2 trillion (reducing the Fed’s balance sheet) could result in a 1937 like economy which was the third worst downturn in the 20th century.  From May 1937 to June 1938 real GDP was minus 10% and unemployment hit 20%.

-->Yet the Fed does not seem to be concerned at all about any of this?

I look for an economic collapse throughout the world if the Fed raises rates as planned and executes QT. Good luck! 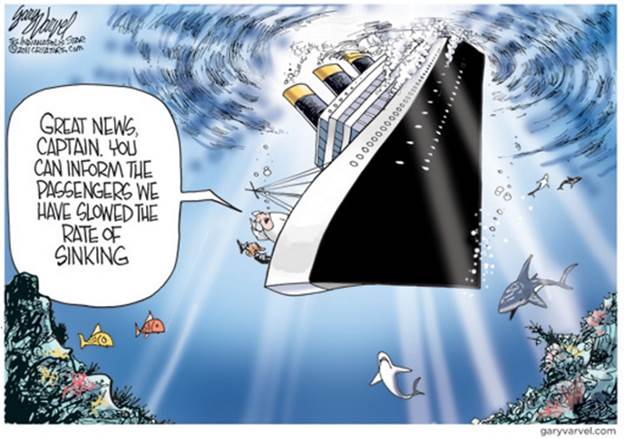 On Friday, the G-7 nations voted to cap the price of Russian Oil in an attempt to reduce Moscow's ability to fund its war in Ukraine without further stoking global inflation. Finance ministers from the G7 group of countries — the United States, Japan, Canada, Germany, France, Italy, and the United Kingdom — said they would ban the provision of "services which enable maritime transportation of Russian-origin crude oil and petroleum products globally" above the price cap. That could block insurance cover or finance for oil shipments.

The maximum price for Russian oil would be set by "a broad coalition" of countries, the G7 said in a joint statement.

What is a price cap? Price controls which create shortages.  Shortages invariably drive up the price of the commodity in scarce supply!

Putin (who is said to be a master chess player) is said to give buyers a 30% discount for Russian oil.  On August 24th, Bloomberg wrote:

“Russia has approached several Asian countries to discuss possible long-term oil contracts at steep discounts, according to a Western official.  The tentative conversations to offer some Asian buyers discounts of up to 30%.”

Indonesia’s minister of tourism, Sandiaga Uno, said in remarks he posted on Instagram over the weekend that Russia has offered to sell it oil “at a price that’s 30% lower than international market price.”

Also, there are rumors that Putin will permit Russian oil to be purchased with gold!   If true, that implies the U.S. dollar will be substantially weakened as nations can buy gold and exchange it for oil at -30% discount.  The U.S. dollar -the world’s reserve currency- would not have to be used to buy Russian oil which could be paid for with rubles or gold.

Russia’s central bank recently fixed the price of 5,000 rubles to a gram of gold. Few Western investors or executives noticed.  Jack Bouroudjian, former president of Commerce Bank in Chicago and now chairman of the Global Smart Commodity Group explained, “It forces people to go to the Russian central bank and pay gold to get rubles to make the transactions (for oil and other Russian exports).”

While we need more information and confirmation of the details, this looks like a master chess move by Putin to counter The G7 oil price cap.

This chess game of geopolitics is between Ursula Von der Leyen, a German physician who is President of the European Commission vs. Vladimir Putin.  Whom do you think will win?

Considering the above scenario, oil and gold look like a buy and the U.S. dollar a sale!

When (and if) the Fed lowers its balance sheet via QT it should help U.S. bonds but hurt stocks.

However, the U.S. Treasury will continue to raise the money needed to finance U.S. government spending which will increase the money supply.  So, a great deal of what we’ll see is psychological, as the money supply will stay the same.

This year has been a brutal one for both investors and intermediate term traders.  The average U.S.-stock mutual fund or exchange-traded fund is down 17.3% for 2022, through the end of August, according to Refinitiv Lipper data (down more than that through September 2nd). That includes a 3.5% average decline in August, reflecting the stock market’s negative reaction to Fed Chairman Jerome Powell’s Jackson Hole speech noting that the U.S. central bank will keep raising interest rates to fight inflation, despite risk of a serious recession.

Playing the short side as a market timing opportunistic play or as a hedging strategy has been extremely difficult this year. That’s partially due to two sharp and swift bear market rallies of 17% to 20%.  Most recently, from June 16th when the S&P 500 hit a low of 3,639.77 through August 16th when that index reached 4,325.28 and touched its 200-day moving average. A disciplined investor or intermediate trader would cover their short positions on such rallies, resulting in a loss.

What makes it even worse is that inverse stock index ETFs only match their index for one day.  There is considerable market price-to-net asset value (NAV) drift over longer time periods.  Compounding risk is one of several negatives of inverse ETFs.  Since an inverse ETF has a single-day investment objective of providing investment results that are one times the inverse of its underlying index, the fund's performance likely differs from its investment objective for periods greater than one day where compounding is present.  Investors who wish to hold inverse ETFs for periods exceeding one day must actively manage and rebalance their positions to mitigate compounding risk.

Also, the fund’s management fees, and expenses (typically low) are deducted from the ETF’s market price.

Active ETFs that short individual stocks are even a worse choice for bearish investors and speculators.  The two popular one’s-- HDGE and DWSH-- do not use leverage, but they have huge expense ratios of 5.2% and 3.68%, respectively.  They trade at a premium to NAV when the market is falling and at a discount when it’s rising.  Their bid/ask spreads are on the order of 2% to 4%, depending on market conditions and daily volume trends.

Shorting individual stocks is by far the riskiest bearish strategy as there are often unexpected shocks or short squeezes which catapults the stock price higher, so you have to cover your short position at the worst possible price!

And as we’ve noted in many Curmudgeon posts this year, a balanced portfolio hasn’t worked at all with stocks, bonds, gold, REITs, foreign currencies, Bitcoin/crypto’s all falling in lockstep.

That is why the only “safe bet” is to hold a lot of cash, ideally in U.S. Treasury bills and notes which pay higher interest rates than CD’s or money market funds.  The Curmudgeon has been buying 2-year T-notes and 1 year T-bills for himself and the accounts he manages.

It seems Fed Chairman Powell is saying something like this:

”Numbing the pain for awhile will make it worse when you finally feel it.” ― J.K. Rowling, Harry Potter