In our last article on the History of Money and Gold, we noted that “U.S. government debt has grown at 3.6 times the rate of real economic growth.  And if this rate of debt increase continues, by September 2030 the U.S. Federal debt will be $68.8 trillion.”

The question then remains, what will the “end game” for the tremendous U.S. debt spiral [1], budget deficits and Fed debt monetization/ever expanding balance sheet balloon?  We will try to answer that question in this article.  As usual, the views and opinions expressed herein are that of historian/idea man Victor Sperandeo.

Let’s first look at the horrendous history of paper currencies.   In his excellent book:  “Fiat Paper Money: The History and Evolution of Our Currency,”  Ralph T Foster describes the performance of the history of paper money.

“Starting in China on April 3, 1024, the Imperial Sung Treasury began to print and circulate “Chico-tzu” notes in the province of Szechwan. For the first time, a government had issued paper money....but by the close of the century, ‘printing -press inflation’ was well underway.” 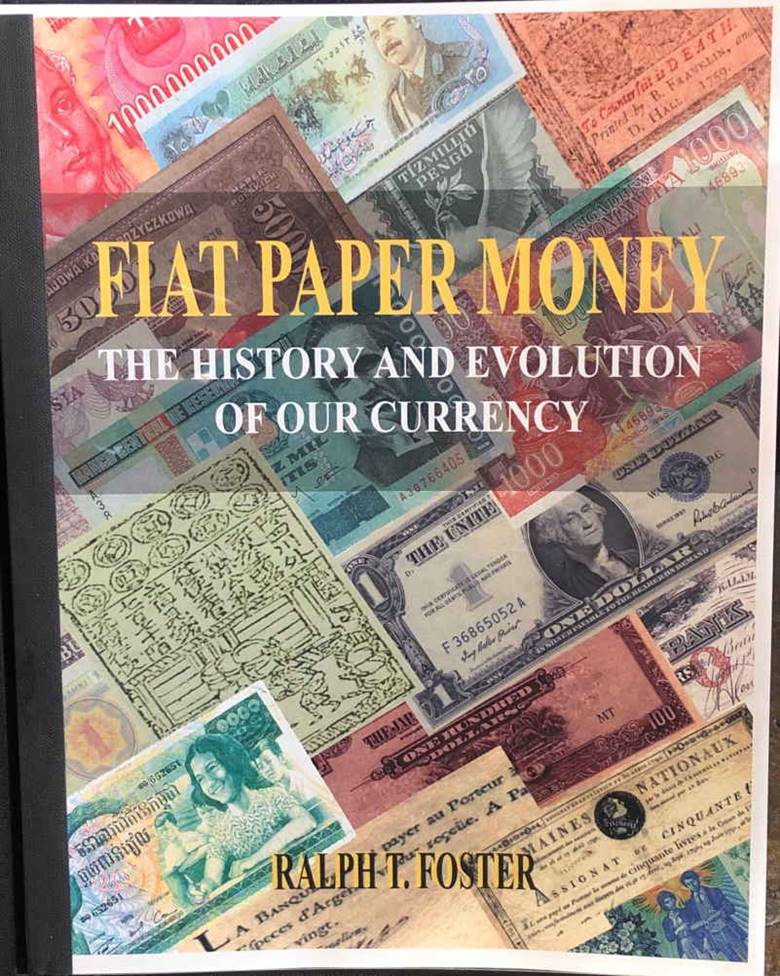 The statistics of paper currencies is like that of Socialist Countries --they ALL lose. Since 1900 to the end of 2010 — 450 paper currencies — DIED! Some like zombies, return in another name, then die again. The Brazilian Real paper (monopoly game) currency has been reborn eight times, with a small valuation change each time.

I estimate that between 40 and 50 countries’ currencies died between 2011-2020 from interpolation of the previous 11 decades.

The U.S. Dollar is alive, but for how long? The total stated U.S. debt is projected to be $29 Trillion on September 30th, 2020.  Add: $10 trillion, in “off balance sheet” debt; $200 trillion in unfunded liabilities; and $7 Trillion in Federal Balance sheet assets (all bought with “book entry” money created out of thin air).

I’m not going to add the debt of U.S. States or private corporate/ personal debt, but you all get the picture: the tremendous amount of total debt cannot be repaid.

Will the U.S. eventually default, or will the debt be inflated away (such that it is repaid using much cheaper dollars)?

I am 100% certain it will NOT be bankruptcy or a U.S. debt default.  In today’s world we don’t even allow junk bonds to fail.  As the Curmudgeon has several times noted, the Fed has bought several junk bond ETFs.  Also, the U.S. Treasury has bailed out selected industry groups, e.g. Airlines, to prevent them from going bankrupt.

Any federal, state, or large corporate default would focus public attention – and blame – on the U.S. government, which is something it wants to avoid at all costs.

Instead, I believe it will be through hyperinflation that our government fails.  Hyperinflation was defined by economist Phillip D. Cagan as a month in which the price level increases by 50%. At that rate, the $29 trillion that is estimated to exist in September 2020 would be washed away in a mere four months, dropping to 6.25% of its original value over that period.

John Williams of ShadowStats has been forecasting hyperinflation for over twelve years.   In his most recent commentary (subscribers only), he identified many of the pre-cursors to hyperinflation:

·       These record high growth rates are suggestive of surging money creation consistent with an inflation pick up. The concern and effects here should mount along with developing product shortages, such as meat and lumber, where the Second-Quarter GDP and related economic series suggest rising demand and consumption against weaker production, with inventories shrinking as a result.

·       In the context of continuing, soaring gold and silver prices and a weakening U.S. dollar, mounting inflation concerns have been generated by explosive, uncontrolled Money Supply creation by the Federal Reserve, and by soaring, uncontrolled Deficit Spending by the Federal Government. Those official acts of U.S. dollar debasement continue, having been designed to prevent or to mitigate systemic, economic, and financial-market collapse, in the wake of the Coronavirus-Pandemic shutdown of the economy and regular social functioning in the United States.

When hyperinflation hits the U.S., it will happen fast and be over quickly, which is the only way to go.  Here’s the scenario:

The inflation will likely be propelled by the adoption of Modern Monetary Theory [2] and exacerbated by the implementation of minimum basic income (or perhaps even universal basic income).

MMT is a heterodox macroeconomic theory that perceives fiscal policy as a representation of how much money the government is putting into the economy or taking out. Therefore, fiscal policy would be analogous to current monetary policy.  MMT states that any amount of government spending can be paid for by the creation of money (a country’s own currency). Budget deficits don’t matter, because the government can create money to pay for them.

MMT advocates say that government spending shouldn't be determined by budget deficit levels, but by whether or not spending is keeping the economy at full employment and at a reasonable level of inflation.

MMT would turn government fiscal policy into the tool that would fulfill the Federal Reserve's dual mandate, in place of the Fed's role in fulfilling it.

In that case, one questions whether the Fed could be eliminated?

“So why wouldn’t this potentially unlimited money-printing turn into hyperinflation like it has in other places (e.g. Venezuela’s inflation rate exceeded 1,000,000% by 2018)? Because, MMT supporters say, the government would increase taxes at the first sign that prices were beginning to rise any faster. The idea being that this would suck enough dollars out of the economy to make up for all the ones that were being created. It’s a complete inversion of the way things normally work, where fiscal policy is primarily about funding the government and monetary policy is about keeping inflation under control.”

Many questions arise. Victor points out that the way inflation is measured in the U.S. has changed several times so there’s no historical consistency to calculate an “average acceptable inflation rate.”  More importantly, what level of inflation (or “high water mark inflation rate”) should trigger a proposed tax increase?

The Curmudgeon notes that there are many inflation indicators/gauges to choose from. So, what inflation metric should be used for Congress to quickly raise taxes (to curb inflation) and would they be successful in doing so?

Finally, how quickly must that tax increase become effective such that additional tax revenues offsets government money created via MMT?

According to Investopedia: “MMT was developed by American economist Warren Mosler and bears similarities to the older schools of thought like Functional Finance and Chartalism. Mosler first began thinking about some of the concepts that form the theory in the 1970s when he worked as a Wall Street trader. He eventually used his ideas to place some smart bets at the hedge fund he founded.”

Mosler co-founded AVM, a broker/dealer providing advanced financial services to large institutional accounts and the Illinois Income Investors (III) family of investment funds in 1982.  He wrote “Soft Currency Economics II” and “The 7 Innocent Frauds of Economic Policy,”  As he is an exceptional thinker, I highly recommend you read his commentaries here.

When professors get exposed to MMT they often become very passionate about it. One such MMT advocate is Stephanie Kelton, PhD, a professor of economics and public policy at Stony Brook University (Curmudgeon’s alma mater- BS Math & Electrical Science 1968).  Professor Kelton’s book “The Deficit Myth” was an immediate best seller and got rave reviews, like this one from the UK Guardian:

“Kelton has succeeded in instigating a round of heretical questioning, essential for a post-Covid-19 world, where the pantheon of economic gods will have to be reconfigured.”

The New Yorker magazine wrote in an August 20, 2019 feature article:

“Kelton is the foremost evangelist of a fringe economic movement called Modern Monetary Theory, which, in part, argues that the government should pay for programs requiring big spending, such as the Green New Deal, by simply printing more money. This is a polarizing idea.”

The Curmudgeon had a very pleasant chat with Stephanie today.  Around 1995, she and her colleagues started a research investigation of prior work leading to MMT as per this email:

“Many of the ideas behind MMT (sector balances, government as employer of last resort, tax-driven currency/chartalism, etc., etc.) pre-date Mosler. Minsky was doing it in the 1960s. Godley in the 70s and 80s etc. The MMT “project” began circa 1995. It was through collaborative research (inspired in part by Warren Mosler’s short book, Soft Currency Economics) that we (the academic scholars) discovered that many of Warren’s ideas were already known and sometimes even commonplace decades or even centuries earlier.”

I believe we’ll eventually see the U.S. government handing out $2,000 a month to everyone over 18 years old, and that money will be printed (rather than borrowed).  That would be $6.5 trillion a year going into the hands of consumers ready to spend it (as opposed to the Fed’s Quantitative Easing programs which have mostly benefited investors in financial assets).

Assuming inflation results from MMT, universal income, increased bank lending/money velocity pickup, will take the blame for the resulting inflation?  Probably, the general population.  They will have been given what they wanted and left to deal with the consequences.

I conservatively expect gold will increase in value to between $10,000 to $25,000 an ounce, which is only between 4 and 12.5 times its current value.  That wouldn’t even keep pace with the level of inflation in this scenario, so much higher prices are possible.

If you think my estimates are too high, note that in France during the hyperinflation period between 1789 and 1797 gold went up by a factor of 600!

Why will hyperinflation be the U.S. government’s “solution” to the problem?  Let me close with the words of Ernest Hemingway:

“The first panacea for a mismanaged nation is inflation of the currency; the second is war. Both bring a temporary prosperity; both bring a permanent ruin. But both are the refuge of political and economic opportunists.”