Today’s column is shorter than usual because the Curmudgeon is leading an Abrahamic Alliance volunteer project at the Salvation Army to benefit homeless and poor people.

We’ll be back in full force next week. Please let us know what you think of our work (email the Curmudgeon at ajwdct@gmail.com).

BofA Global Research on Recession, the Fed and Inflation:

BofA Global Research’s new US economist, Michael Gapen, is now forecasting a mild recession this year. A number of forces have coincided to slow economic momentum and the economy appears to have a weaker trajectory, particularly in services.

BofA sees a combination of lagged effects from tighter financial conditions, a persistent inflation tax on household spending, and acknowledgement by the Fed that labor markets need to soften to restore price stability, tipping the balance of risks toward recession later this year.

With a sharper slowdown and higher unemployment, BofA expects inflation to moderate faster than before. Our forecast puts inflation broadly in line with the Fed's 2% mandate by the end of 2024. While 100bps is possible, we think the Fed will opt for a 75bp increase with an additional 50bp in September, with the Fed funds rate ending the year at 3.25-3.5%. As inflation pressures moderate, we expect the Fed to begin cutting rates in the second half of next year.

With that hotter than expected inflation news, one would’ve expected commodities and gold prices to rise.  However, they are both in significant downtrends.

Considering weak commodities, lost wealth from multiple bear markets, and a “technical recession,” I believe the CPI has peaked for now. In particular, oil and gas prices have come down quite a bit in July after rising sharply in June.

Meanwhile, On July 27th the Fed will increase the Fed Funds rate by 75 or 100 bps. That will be it till the next FOMC meeting on September 20-21st.   In my view, the Fed’s July rate hike will be the last action till after the November elections.

The 30-year T-Bond and S&P 500 made their lows on June 13th and 14th, respectively. I believe the financial markets will rally from here as the economic news gets worse and it becomes apparent that the Fed must stop raising rates.  Gold should also rally after the 2nd quarter GDP Advanced Estimate is released on July 28th.

Whether the June lows for stocks and bonds were long term or intermediate term bottoms remains to be seen.  It’s all based on what the Fed does with respect to rate increases and Quantitative Tightening (which is expected to increase in September unless the Fed pivots).

There are two periods during the calendar year that tend to favor gold. Jay noted that one occurs between mid-summer and early fall; the other happens near year-end into the new year. The remaining time of year has seen gold register a net loss in value.

The table below summarizes gold’s performance during each favorable and unfavorable period.

Despite favorable seasonality, we believe Gold’s price will be largely dictated by the U.S. dollar index (the DXY is +12.52% YTD and +16.5% YoY).  And the DXY will be determined by the “perception” of real interest rate differentials in the U.S. vs the Eurozone (the Euro accounts for 58% of the DXY).

If the Fed raises rates less than expected and/or defers QT, expect Gold to rally.  If not, don’t expect much from Gold.

This quote from “When Money Dies: The Nightmare of Deficit Spending, Devaluation, and Hyperinflation in Weimar Germany,” Adam Fergusson is worth pondering at this time. 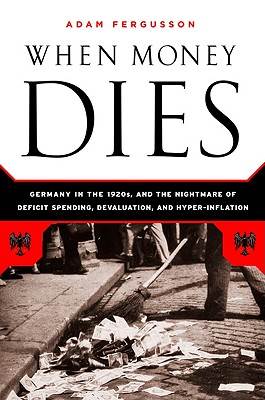 “Undoubtedly, though, inflation aggravated every evil, ruined every chance of national revival or individual success, and eventually produced precisely the conditions in which extremists of Right and Left could raise the mob against the State, set class against class, race against race, family against family, husband against wife, trade against trade, town against country.

It undermined national resolution when simple want or need might have bolstered it. Partly because of its unfairly discriminatory nature, it brought out the worst in everybody — industrialist and worker, farmer and peasant, banker and shopkeeper, politician and civil servant, housewife, soldier, merchant, tradesman, miner, moneylender, pensioner, doctor, trade union leader, student, tourist -especially the tourist. It caused fear and insecurity among those who had already known too much of both.

It fostered xenophobia. It promoted contempt for government and the subversion of law and order. It corrupted even where corruption had been unknown, and too often where it should have been impossible. It was the worst possible prelude — although detached from it by several years — to the great depression; and thus, to what followed.”

Be well, stay healthy, try to find diversions to uplift your spirits (Curmudgeon goes to live concerts and does volunteer work), wishing you peace of mind, and till next time………