The yield curve is flattening, inflation is surging while the economy is weakening.  We analyze what all that means in this post. Please let us know what you think.

The relatively flat yield curve (1.) suggests the economy is weakening (more evidence below).  Yet the Fed is way “behind the curve” on rate hikes and talked about more aggressive tightening this week.

As we all know, Fed rate increases slow economic growth by raising borrowing costs and reducing economic demand.  Lance Roberts noted in his article on the Potemkin Economy:

“The most significant risk is the Fed becoming aggressive with tightening monetary policy to the point something breaks. That concern will manifest itself as a dis-inflationary impulse that pushes the economy towards a recession. The yield curve may be telling us this already.” 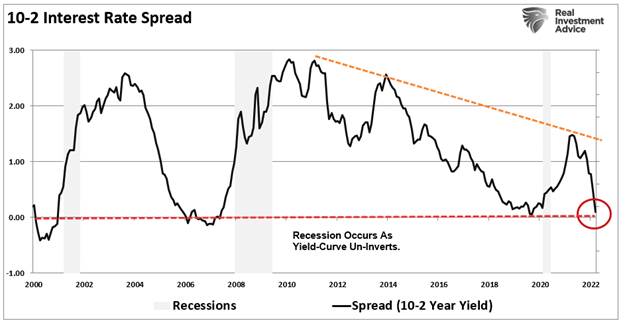 Yet the Fed had no option but to hike rates (Chairman Powell talked about more aggressive rate hikes to come this week) with consumer inflation running at nearly 8% annualized and producer inflation at 10%.

As discussed in last week’s Curmudgeon column, the spread between consumer and producer price inflation is the largest on record. “When the Producer Price Index is rising at a rate far more than the Consumer Price Index (as it is now-- 10% vs 8%), it suggests a highly abnormal state of economic affairs, warranting heightened investor caution.”

Eventually, inflation will erode profit margins leading to layoffs, automation, and other actions to reduce overall costs. Simultaneously, the consumer will reduce spending (~70% of GDP) as real wages fail to keep up with higher living costs, especially energy prices.

The University of Michigan’s final estimate of its March 2022 Index of Consumer Sentiment declined from its preliminary estimate to new ten-year and Pandemic lows. That’s shown in this table and chart: 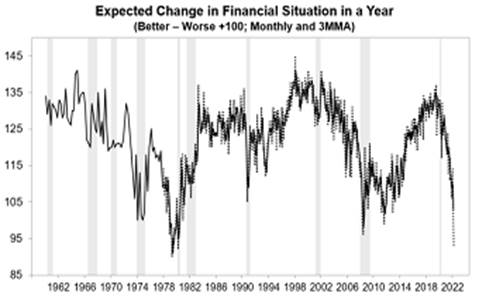 EPM Macro Research says that “real economic growth continues to decline. Furthermore, higher inflation will crush real income and push the economy near recessionary conditions. There is no substantial evidence for a pivot higher in growth. The downturn will persist.”

Indeed, the Atlanta Fed’s GDP Now estimate of 1st quarter 2022 economic growth 0.9 percent on March 24, down from 1.3 percent on March 17. After recent releases from the U.S. Census Bureau and the National Association of Realtors, the estimate of 1st quarter real gross private domestic investment growth decreased from -4.2 percent to -5.8 percent.

“After a month of oil prices we have not seen in nearly a decade and weeks of record-high fuel prices, high-frequency data suggest that consumers are beginning to react,” wrote Natasha Kaneva, head of commodities research at J.P. Morgan.

“While a recession has been a risk scenario, we worry that the odds are increasing, and it could become the base case,” says Marc Chandler, managing partner and chief market strategist at Bannockburn Global Forex.

Lance Roberts of Real Investment Advice says, “With the recent Fed rate hike, the (recession) clock has started ticking. There is no previous period where Fed rate hikes did not lead to a crisis, recession, or bear market.”

During previous periods where the inflation spread was positive, and the Fed was hiking rates, it preceded either a recession, bear market, or a crisis.  That’s depicted in this graphic: 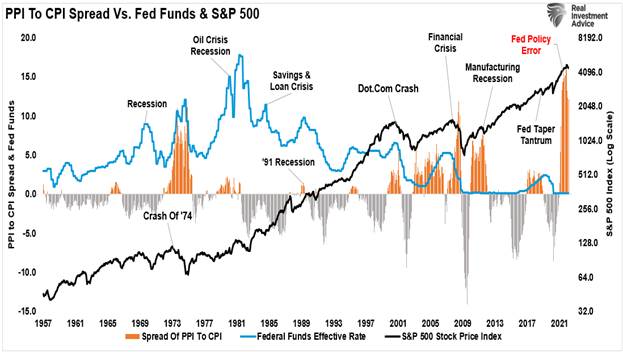 Is a Financial Accident Imminent?

“10-year Treasury yields have been trending downwards ever since Paul Volcker raised rates enough to cause a recession in the early 1980s. Every time it touches or at least nears the downward trend line, a financial accident occurs.” 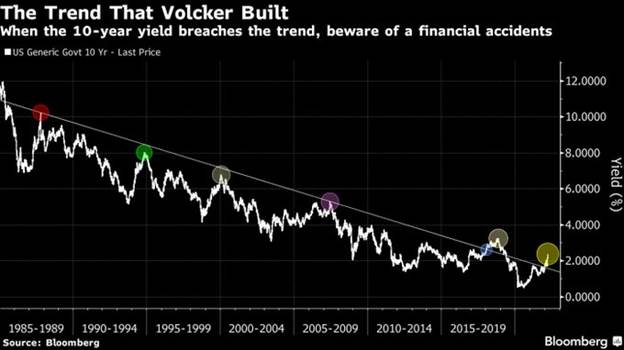 The markets ultra-high valuation strongly increases the risk of a financial accident resulting from aggressive Fed rate hikes or geopolitical shock. Over the last 13-years (since the March 2009 bottom), the pace of stock price increases accelerated due to massive fiscal and monetary interventions, extremely low borrowing costs, and unrelenting “corporate buybacks.” As shown in the chart below, the deviation from the exponential growth trend is so extreme it dwarfs the “dot.com” era bubble. 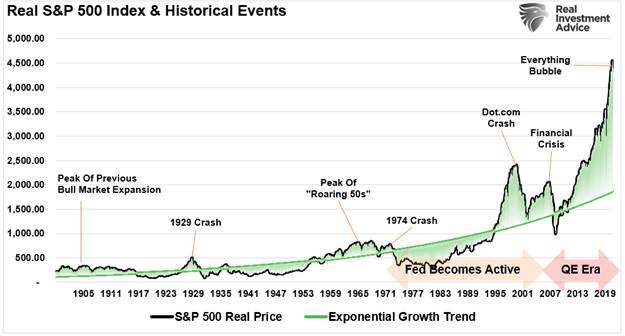 As the Fed hikes rates in a futile effort to slow inflation, it will result in an earnings recession, which will be coincident with an economic recession.  That will surely prolong the bear market we’re now in. 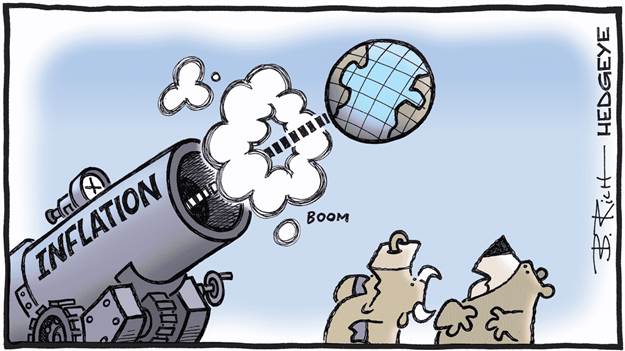