Based on 56 years of study, I can unequivocally state that Dow Theory produces excellent long term trend indicators (Bullish or Bearish), but it’s not a timing signal.  So being in a Bear Market has nothing to do with strong secondary/counter trend rallies.  In fact, a key characteristic of a Bear Market is strong and fast rallies caused by short covering, bargain hunting, and the “buy the dip” crowd.

Of critical importance is the “primary” (long term) trend, which is months to years. That is now considered down, at least from my perspective.  A Bear Market means we won’t see new all-time highs in stock indexes anytime soon. It also implies a recession,

Another long-term indicator that has worked the best in providing high stock market returns is the 200-day moving average (MA).  When the 200-trading day moving average TURNS DOWN and the price of the index closes below it, a Bear Market is confirmed. This has now occurred everywhere I have looked.

Please refer to “The stock market indicators - as a guide to market timing,”  by William Gordon for more details. Of the 10 major indicators of the stock market Gordon researched for 68 years, the 200-day MA (with specific rules) and Dow Theory were the best at an 18.5% and 18% return, respectively.

After the Fed Chairman speaks the markets almost always rally, mainly due to institutional buy programs.

It’s as If the market is attempting to make the Fed Chairman look good, yet in this case he said nothing good!

The last time the Fed raised rates seven times in a year was 1978, where they did it 9 times.  That caused a steep recession soon thereafter.

While we don’t know what the Fed will do to lower the balance sheet, all odds point to letting the bonds and mortgages that mature run off while not replacing them.  I don’t believe they will sell the debt they own.

The goal of the Fed is to LOOK LIKE they care about controlling inflation, but not really doing anything to stop it.  If they did, that would cause a recession before the midterm elections.

I still believe there will be only one more rate increase, because the economy is deteriorating rapidly. This differs with Chairman Powell who says the economy is very strong, but inflation remains high.

The FOMC stated this week:

“Indicators of economic activity and employment have continued to strengthen. Job gains have been strong in recent months, and the unemployment rate has declined substantially. Inflation remains elevated, reflecting supply and demand imbalances related to the pandemic, higher energy prices, and broader price pressures.”

“The invasion of Ukraine by Russia is causing tremendous human and economic hardship. The implications for the U.S. economy are highly uncertain, but in the near term the invasion and related events are likely to create additional upward pressure on inflation and weigh on economic activity.”

Powell is saying the U.S. economy is strong, that inflation is caused by “supply-demand imbalances,” will remain high, but “weigh on economic activity.”  So, does that mean the economy will weaken and if so, are six more rate increases appropriate?

Regarding supply-demand imbalances effect on U.S. inflation, why are China and Japan’s inflation rate under 1% year over year and not subject to the same imbalances?  (See their money supply growth rates which are much lower than that of the U.S.).

How we can fix the inflation problem, when the Fed Chair does not agree with the historical definition of inflation?

The Fed’s DISINFORMATION campaign is so grotesque and so pernicious, that I must repeat and stress reality: that inflation is always and everywhere a monetary phenomenon.  However, Fed Chair Powell does not mention that ever!

So did Professor Steve Hanke, a major critic of the Fed, who wrote in the WSJ on February 23rd:  Jerome Powell Is wrong. Printing Money Causes Inflation.

The Fed chairman insists the growth of M2 doesn’t ‘have important implications.’  The math shows otherwise.

By turning a blind eye to money, the Fed has allowed the printing presses to run in overdrive. The money supply as measured by M2, which is the Fed’s broadest measure of money in the economy, has been growing at record rates—with 39.9% cumulative growth since February 2020. M2 is still growing at an elevated, inflationary rate of 12.6% a year. Before the pandemic, you’d have to go back to the early 1980s to find a monetary growth rate this high.

“Reducing Europe’s dependence on Russian energy isn’t impossible but will be very expensive. The shift will mean that gas prices stay higher for longer, we estimate 2023 gas prices of $200 bbl, or 6x pre-COVID levels and this assumes Russian gas flows aren’t disrupted. Ultimately, the European solution requires a combination of increased LNG imports, though capacity constraints are a challenge, demand destruction and accelerated investments in renewables.”

“Moderate inflation is normal and expected, and the stock market generally performs just fine during those periods. However, when inflation reaches an abnormally high (or low) level, it is a warning sign for stocks in general. And when the Producer Price Index is rising at a rate far more than the Consumer Price Index (as it is now, i.e., 10% vs 8%), it suggests a highly abnormal state of economic affairs, warranting heightened investor caution.”

Cartoons - How the Fed is fighting inflation: 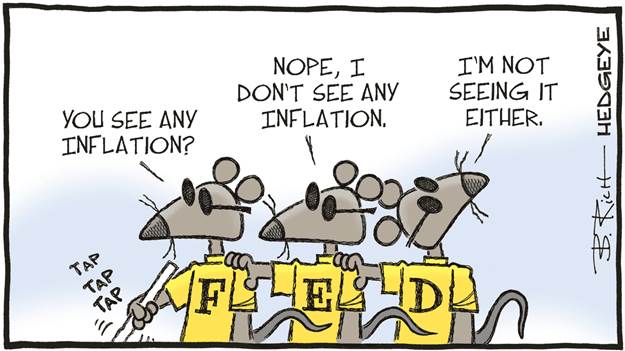 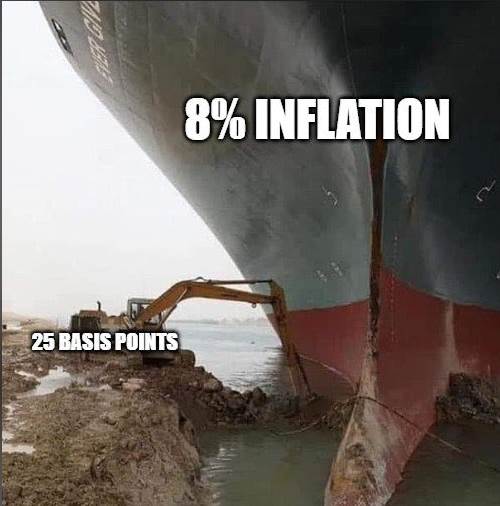 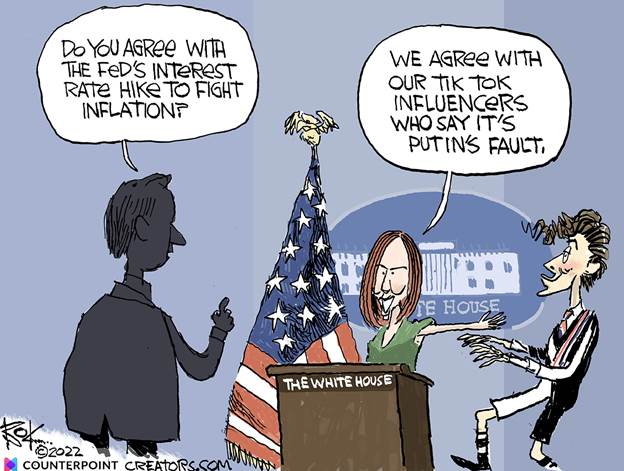 "Little else is requisite to carry a state to the highest degree of opulence from the lowest barbarism, but peace, easy taxes, and a tolerable administration of justice: all the rest being brought about by the natural course of things.”