Are U.S. Stocks in a Bear Market?

All three major U.S. stock indexes fell for a third consecutive week, continuing their slide to start 2022, with investors worried about the prospect of higher interest rates and their negative effect on stock prices.

Last week, I wrote that there would be no bear market in stocks this year.  I am still of the belief that we are NOT in a bear market as I write this commentary and there won’t be one in 2022.

Why is simple – a bear market will likely cause a recession which would end the Democratic Party for a generation.  I’ll try to explain this in more detail below.

Biden and the Fed – Avoid Recession at all Costs:

President Biden’s approval has recently dropped to new lows.  According to the PBS News Hour, more Americans disapprove than approve of how Biden is handling his job as president, 56% to 43%.  Currently, just 28% of Americans say they want Biden to run for reelection in 2024, including only 48% of Democrats. Americans are even more downbeat about his handling of the economy, with just 37% approving. 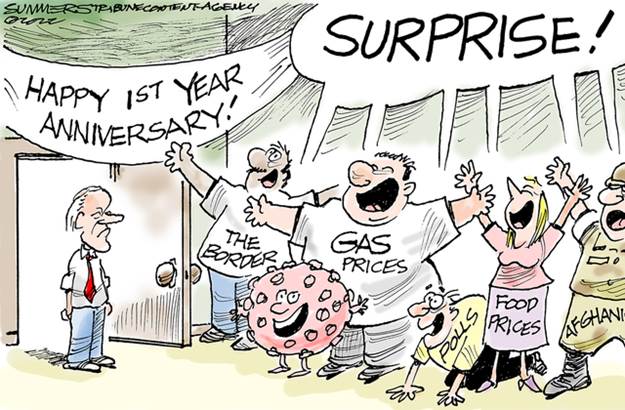 If the Fed raises rates which causes a recession, Biden will be toast.  Hence, he’s likely to pressure the Fed NOT to aggressively raise rates.

Moreover, Biden has just appointed three new Democratic party FOMC members, who are not likely to vote to raise rates repeatedly.  Instead, they are likely to be focused on the November midterm elections and will not permit a recession to start before then.

Biden also reinstated Jerome Powell as Fed Chairman.  In my opinion, that was a huge mistake as Powell has not done a good job of running the Fed (other than continue inflating financial assets).

For example, the Fed’s policy to fight inflation is all talk and lame excuses.  Powell blames inflation on shortages created by the coronavirus. Thereby, not a concrete step has been taken to end inflation, aside from lowering the monthly QE allotment over a few months.  Yes, that lowers inflation, mainly of financial assets, but does not stop real price increases.  That would require a substantial tightening of monetary policy which would raise rates and lower money supply growth.  Yet that tough medicine would slow the U.S. economy.

The Fed’s policy of “talk the talk” is called “moral suasion.” Threats of rate increases without saying when that might happen.

As I wrote in last week’s column, the fact that Goldman Sachs and JP Morgan Chase are forecasting more rate increases than the FED has tells me that the Fed will not do more than two rate increases this year. I’m still of that opinion.

“Federal debt, which since 2019 has shot from 80% to around 100% of GDP, is more easily sustained with low rates, although slower growth works in the opposite direction. Indeed, one reason interest rates may be low is that investors think the Fed won’t raise them so much for fear of a stock market crash. It raised rates above 2.25% in 2018, then reversed course when stock and commodity markets wobbled.”

Indeed, the Fed has become more politicized than ever as this cartoon illustrates: 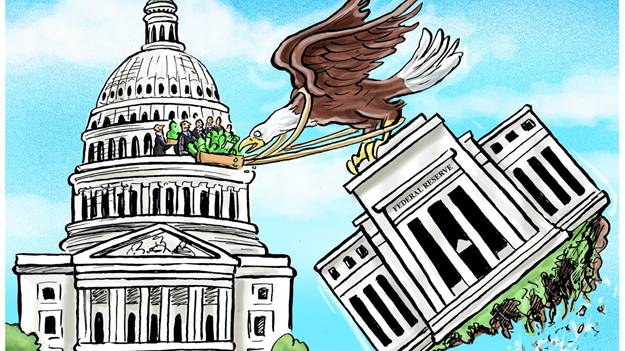 U.S. Treasury Secretary Janet Yellen told CNBC on Thursday that she continues to forecast inflation falling close to 2% by the end of 2022.

“If we’re successful in controlling the pandemic I expect inflation to diminish over the course of the year and hopefully to revert to normal levels by the end of the year, around 2%,” she said during the CNBC interview.

Yellen maintains that inflation is a “shared responsibility” between the Biden administration and the Fed and expressed confidence the central bank was moving appropriately.

I wonder what evidence that was based on?  Or how magically inflation will drop from 7% YoY now to ~2% by years end?

While stock market crash predictions are as well advertised as “you should get your booster” and “buy Bitcoin,” I have to be a contrarian.

A bear market may indeed occur, but not from Fed talk. Let’s look at the evidence from the U.S. equity markets.

Note 1.   A short-term decline is defined as days to weeks vs intermediate declines of weeks to months, and long-term bull and bear markets months to years).

To classically state we are in a bear market, the DJI, S&P 500, and Nasdaq (NDX or NDX 100) indexes must close below their 200-trading day moving averages (MAs) with the MA “declining.”

A Dow Theory bear market signal (is it still relevant?) would be triggered if BOTH the Dow Industrials (DJI) and Dow Transports (DJT) indexes each close below their previous important lows (measured by volume).  The last “minor” DJI lows were from 11/8/21-12/1/21.

The Dow Transports have slightly closed below its last minor lows, but the Dow Industrials have not. That creates a “divergence,” which could be interpreted as a bullish omen.

I have the charts of the Dow and Rails/Transports from 1885 (obtained from the late Richard Russell).  Having reviewed them hundreds of times the decline of the last 17 days takes place thousands of times and amounts to very little.  Of course, the market will tell the tale, but as of now nothing is confirmed.

Keep in mind that the Fed meets next Tuesday and Wednesday.  FOMC meetings often move markets, even if there is really nothing new that’s reported.  Investors will be watching closely for more guidance on the central bank’s plan to raise interest rates.

Also, Apple, Microsoft and Tesla are among tech giants reporting in a busy earnings week.  Overall, about a fifth of the S&P 500 and nearly half of the Dow Jones Industrial Average companies are expected to provide their quarterly updates during the week starting Monday, according to FactSet.

Any professional investor understands that the CURRENT stock market valuations - in all metrics - are at record highs (see almost any previous Curmudgeon post).

When this bubble bursts and the recognition come, it will awesome! Like when a nuclear bomb goes off the decline will NOT be orderly but will be like pandemic induced waterfall decline from 2/20/20-to-3/16/20.

If I see some facts based on historical data that depicts a bear market is here, I’ll be the first to say so. I believe that if any further bad economic news appears, it will lessen the need for the Fed to raise rates.  In that case, prepare for a rally in stocks and bonds.

Jeremy Grantham, the famed and respected investment manager, who has been calling market bubbles for decades, said the historic collapse in stocks he predicted a year ago is underway, and that the Fed can’t stop it.

I believe he is NOT objective as he is too invested in his own opinion.  That is best expressed by the quotes below.

“Attachment is a manufacturer of illusion and whoever wants reality ought to be detached.” – Simone Weil

“Illusion is an anodyne, bred by the gap between wish and reality.” — Herman Wouk