It is the third straight year of double-digit gains for the broad index, and the second amid the Covid-19 pandemic.  Here are other highlights: 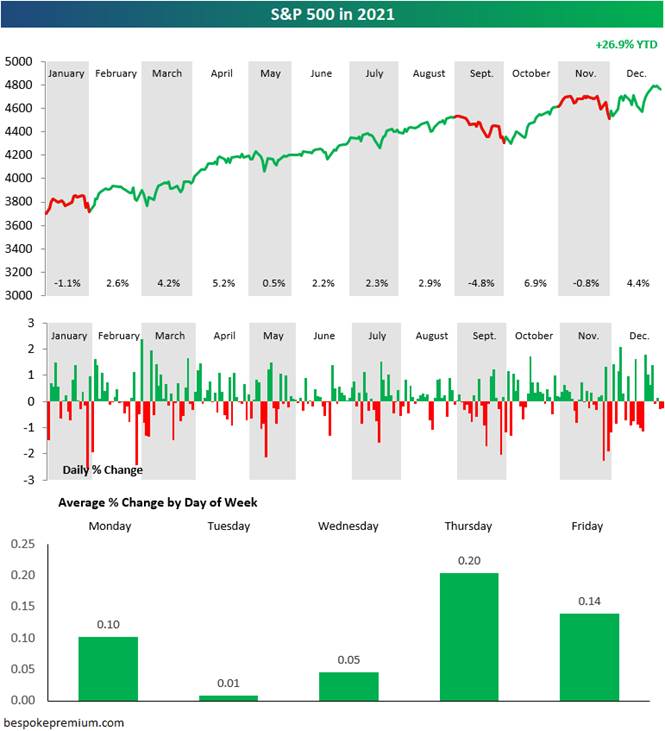 The combined market values of Apple, Microsoft, Google-parent Alphabet Inc., Amazon, and Meta Platforms—the company once known as Facebook stand at $10.1 trillion as of Wednesday’s close. That’s up from $7.5 trillion at the start of the year, reflecting a 35% rise that exceeds the gains of the Dow, S&P 500, and Nasdaq Composite in what has been yet another strong year where stocks prices increased more than earnings.

As a result of the big tech stock price run up, a larger portion of the market is under the sway of just a few big names. The five aforementioned—along with Tesla and chip maker Nvidia — now comprise more than 27% of the S&P 500’s total value. And that seems likely to grow even further. Apple alone is on the cusp of reaching the $3 trillion mark, and at least 13 market analysts have price targets on the stock that would put the company’s market value well past that milestone. And Wall Street’s median price target of $4,000 for Amazon’s shares would put the e-commerce giant past the $2 trillion mark—up 17% from its current value.

Warning Signs Flashing (as they have been for years):

Inflation could turn companies’ and customers’ finances upside down. Many companies that have been market darlings are losing money. Big-name stocks continue to log giant one-day swings. However, individual traders and institutional investors are hungry to take bigger risks and willing to accept bouts of volatility.

“When you see your friends making a ton of money in the market, everyone jumps in,” said Zhiwei Ren, a portfolio manager at Penn Mutual Asset Management.

“We’ve never seen anything like that in history,” said Dean Curnutt, chief executive of brokerage Macro Risk Advisors, referring to the volatility in some single stocks. “The up crashes have been gigantic.”

Figures from Macro Risk Advisors show that stocks such as GameStop, AMC, Tesla and Nvidia Corp. were more volatile on days the shares were rising than when they were falling, upending the market’s typical dynamics.

“Who said it was escalator up, elevator down for stocks?” wrote Mr. Curnutt in a note to clients.

These moves lured many investors, both institutional and individual, into options, a shift that can make the market vulnerable to bigger swings, some traders have said. Trading activity in options, which give traders the right to buy or sell stocks at a specific price by a stated date, hit the highest level in the industry’s history in data going back to 1973.  That’s yet another sign of extreme speculation.

2021 (and the previous 12 years) showed the Fed in its full corrupt form and glory.  The U.S. is nothing like the laws that our founding fathers designed – the U.S. Constitution.

–> Mises was 100% correct! He predicted everything we now witness today with fiat money (e.g., “the everything bubble,” widening income inequality, etc.). Sadly, the undisciplined control of money supply growth is likely to end the liberty that created the greatest nation in world history.

In my opinion, we are now nearing the end of the U.S. government’s ability to “kick the can down the road” (e.g., Congress’ vote to raise the debt ceiling, while the Fed continues to monetize1 most of the newly issued U.S. Treasury debt since March 2020).

The Fed has turned the Wizard’s Wand of printing money (aka “key stroke entries”) into the visible end of America by abusing its power.

“The Federal Reserve Bank of New York is eager to enter into close relationship with the Bank for International Settlements....The conclusion is impossible to escape that the State and Treasury Departments are willing to pool the banking system of Europe and America, setting up a world financial power independent of and above the Government of the United States....The United States under present conditions will be transformed from the most active of manufacturing nations into a consuming and importing nation with a balance of trade against it.”

→ That’s exactly what happened! Indeed, McFadden2 was a true soothsayer.

The world we live in today and what will happen to the U.S. is a mixture of the Welfare State, Corporativism, and Fascism! For sure, it’s not capitalism.

Readers are encouraged to review these Curmudgeon blog posts where I explain my views in detail:

Economic Fascism, Corporatism, and the Move to Anarchy in the U.S.

How Does America Keep Functioning While It Sinks Into Depravity and Corruption?

The Fed Creates Another Moral Hazard and Ends Free Markets

U.S. Government Economic Numbers Are Not What You Think They Are!

Rather than end my polemic discourse on a gloomy note, please consider the following 2022 New Year's resolutions, courtesy of Mike Luckovich, The Atlanta Journal-Constitution: 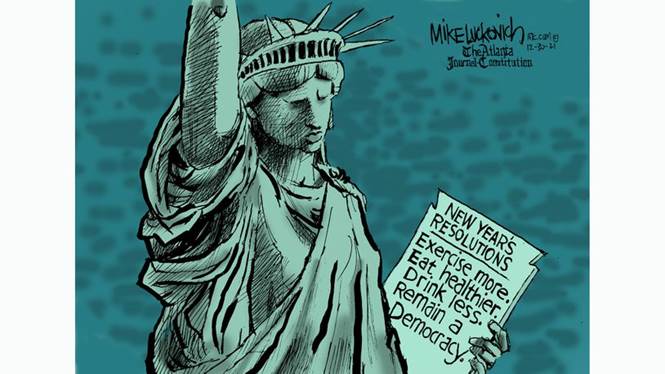 Money supply growth is the key to the markets – not interest rates. The Fed has given guidance via talk about reducing their U.S. government bond and mortgage debt purchases, with all purchases ending in March 2022.