Will the Fed’s Monetary Naivete Allow Inflation to Spiral Out of Control?

The Federal Reserve Board concluded its December meeting on Wednesday, announcing it will speed up the taper of its enormous asset-purchase program (i.e., the latest round of QE). The Fed also indicated it sees as many as three rate hikes in 2022.

Victor provides some background on the Fed’s extraordinary loose monetary policy and offers his opinion on what the Fed’s 2022 plan means for the economy, inflation, and markets.  His hard-hitting conclusions are provocative and food for thought.

The Fed said it will double the size of the taper of its latest QE program, which started at the outset of the pandemic in March 2020 and was $120 billion of asset purchase per month.

The QE reduction is from $15 Billion monthly announced in November to $30 billion now.  So, this round of QE will end by March 2022.  During that two-year period, the Fed would have created fiat money totaling $2.565 trillion dollars!  And that’s not counting the money created to buy corporate bonds and High Yield ETFs during the beginning of the pandemic.

Fed Chairman Jerome Powell on Wednesday cited asset valuations as one of four key areas the central bank looks at when assessing financial stability risk. “I would say, asset valuations ... are somewhat elevated,” Powell said.  What an understatement!

With the CPI greatly understated at 6.8% Year over Year (YoY) and 11 monthly CPI increases averaging an annual 7.6% (as of November), what would history suggest about this revised Fed monetary policy?  Will it have a significant impact on price increases or money supply growth (actual inflation)?

In this article, I will explain why the Fed’s new plan will not stop price increases or inflation!

Can the Fed Control Inflation if it’s in Denial?

“Inflation is a choice. It’s a choice for which the Fed is chiefly responsible for. The risk of an inflationary spiral arises when policy makers first dismiss the problem and then cast blame elsewhere,” said Kevin Warsh in a superb WSJ editorial.

The “choice” is how many fiat dollars does the Fed inject into the economy? The Fed does NOT control prices -only money supply and interest rates.

But here is the main problem: The Fed Chairman doesn’t acknowledge what inflation is, so how could he end its rise?

In his testimony with Congress on Wednesday, Federal Reserve Chairman Jerome Powell said that historically, changes in the money supply level have not affected levels in inflation. In response to a question posed by Congressman Warren Davidson about whether “M2 [money supply] going up by 25% in one year” is going to “diminish the value of the U.S. dollar,” Powell responded, “there was a time when monetary policy aggregates were important determinants of inflation (since from 900 AD on) and that has not been the case for a long time.”

Powell added that “the correlation between different aggregates [like] M2 and inflation is just very, very low, and you see that now where inflation is at 1.4% (**)  for this year. Inflation dynamics evolve over time, but they don’t tend to change overnight.”

** By stating that inflation is at 1.4%, Powell is referring to the PCE (Personal Consumption Expenditures index) for 2021 -not the CPI.

This was virtually a criminal statement as it is so false. No, the reason that reported inflation has been low is because M2 growth (see FRED M2) was very low.

Warsh concludes that “The U.S. central bank has enabled price increases that may soon pose a risk to financial stability.”

The correlation between CPI and M2 is very high:

In 1981, the primary way inflation was stopped was to decrease money supply (M2) growth.  That’s best stated in the Summary of this article:

“During Paul Volcker's tenure as its chairman (1979-1987) the U.S. Federal Reserve limited the rate of growth in the U.S. money supply and increased short-term interest rates. These policies are widely credited with bringing down inflation and, after a recession in the early 1980s, leading to a prolonged period of economic growth.”

CPI Would Be Higher if its Components Had Not Changed:

It should be noted that before 1982, the CPI calculation was much different than today. According to ShadowStats, if inflation was calculated based on the old formula, the CPI would be between 14 and 15%!

A better gauge of the real CPI is Import Prices, as they are not adjusted (fudged) by the BLS.  Import prices are up 11.7% YoY!

Please understand that the CPI is a “cost of living index,” which is calculated according to the whims of the BLS bureaucrats. It is NOT a CONSTANT cost of a fixed basket of goods and services.

So all inflation indexes are subjective and controlled by the U.S. government and its agents. It is greatly in their interest to keep those price indices low.

If a law passed to pay all members of Congress $200,000 per 1% rise in the CPI, I’m sure that the BLS would make the CPI calculation similar to ShadowStats’ numbers.  In that case, the CPI would be closer to 15%, which would put an extra $3M in the pockets of the members of Congress!

Will the Fed’s New Plan Work?

Again, do you think the Fed’s new policies arrest price increases and stop inflation?  Empirically NO!  Let’s look at history for a guide….

-->So, raising short term rates had little impact on reducing the CPI.

It should also be noted that price increases come in waves as inflationary psychology takes hold (till it’s broken by a significant reduction in money supply growth):

How in the world will a 1.75% Fed Funds rate in 2022 stop inflation (money supply growth) or its result – price increases?

Despite all the above evidence, the Fed didn’t say anything about curtailing money supply growth, which is THE prerequisite to stop price increases.  But again, the Fed chair seems to be in denial of that important relationship.

Raising short term interest rates to 1.75% means little to the economy, but it has a great impact on equity markets. That is the real issue.

Readers over 60 might remember this slogan: “The stock market has predicted nine of the past five recessions—a joke from Paul Samuelson, master Keynesian of decades ago (the Curmudgeon used his classic Economics textbook in Economics 101 in the Fall of 1965).

Samuelson’s great rival on the supply-side, Wall Street Journal editorial maestro Robert L. Bartley completed the thought when he quipped, “and in the other four (stock market forecasts of recessions), Washington got the message and mended its ways in time.”

For sure, the stock market is not the economy, even though it’s one of the 10 Leading Economic Indicators (LEI) from the Conference Board.   Yet the Fed’s influence on the market has never been greater.  As noted by the Curmudgeon in a recent blog post, 52% of stock market cap changed were due to Fed balance sheet expansion since the global financial crisis (GFC).  Meanwhile, corporate earnings were only responsible for 21% of post-GFC stock market returns.

That’s shown in these two charts: 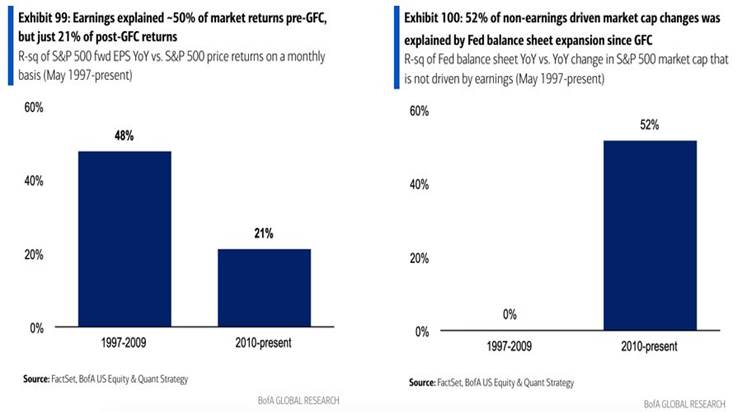 The newly announced Fed policy proposals are a sham.  The Fed is trying to make it look like they are doing something to reduce inflation.  They are not!  They have spoken on who they represent and it’s not the common man!

I sincerely believe, the Fed does not seem to care about the average person’s financial struggle to survive, or the economy, or the financial health of the U.S.  Instead, the Fed seems to focus on the credit, bond and stock markets and the wealth it represents.

The Fed’s real mandate seems to come from its secret owners- the top 1% of the population in wealth and power.

With over 400 PhD researchers working at the Fed, I’m not the only one that understands reality.

→ Genghis Khan would be humbled by this group of empire builders!

A great President said it best: “Inflation is as violent as a mugger, as frightening as an armed robber, and as deadly as a hit man.” Ronald Reagan, 40th president of the United States from 1981 to 1989.