All Aboard a Derailed Train; Russia-Ukraine-NATO Flash Point Bears Watching

Lots of quick takes and charts for your reading pleasure. Victor comments on the heightened tensions between Russia and the west over Ukraine. Let us know what you think by emailing the Curmudgeon at ajwdct@gmail.com.

Interviewed by Caledonia chairman Mark Nelson, the 97-year-old Munger said the stock market now is the most extreme he had seen in recent history.  “Some of the valuations we saw in the dotcom boom were higher,” he said. “But overall, I consider this as being even crazier than the dotcom boom which blew up in 2000.”

Many companies were now trading on the U.S. stock market at prices that represented 35 times earnings – making it much harder for ordinary investors to make money on the market.  The higher prices now being paid for good companies made it more difficult to get good returns.

“It is hard to get results which could be called normal results in investing,” Mr. Munger said.  “I want to make money by selling people things that are good for them, not things that are bad for them.”

Mr. Munger said there were plenty of people around today who were overconfident of their own abilities, particularly those paid for their commentary or advice.

“The ordinary human experience is to be way overconfident in your own ideas, particularly if you’ve worked hard for them and express them to other people,” he said. “The world is full of insanely overconfident people and of course they make lots of mistakes.”

This week, speculators in major equity index futures bought aggressively, moving to a net long position of over $100 billion. That's nearly twice as large as any other position extreme, in either direction, ever. 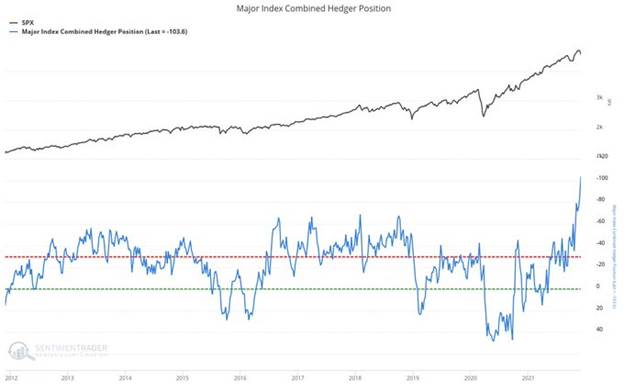 CEOs and Insiders Sell a Record $69 billion of their Stock

CEOs and corporate insiders have sold a record $69 billion in stock in 2021, as looming tax hikes and lofty share prices encourage many to take profits.

The selling is likely to increase even more as December is often an active month for sales due to tax planning.

Jeff Bezos sold $ 9.97 billion in Amazon stock, four times the 2019 level, but in line with the 2020 level. Zuckerberg sold $ 4.47 billion in Meta, while Google founders Larry Page and Sergey Brin sold about $ 1.5 billion in Alphabet shares.  Microsoft CEO Satya Nadella sold nearly half of his shares in the company for $285.4 million.

Insane...record run for U.S. listed options market continues. More than 940 million options changed hands in November, up 40% yoy and the highest monthly volume on record, according to @OptionsClearing 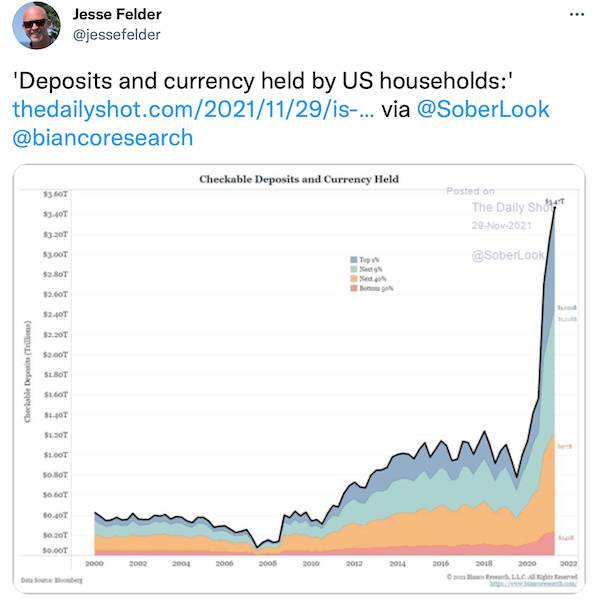 Wild. Bank of America (BofA) estimates that corporate earnings used to explain half of equity market returns up to the financial crisis, but since then they explain only 21%.

BofA Global Research Chief Investment Strategist Michael Hartnett is bearish on 2022, expecting a “rates shock” and a tightening of financial conditions. Michael believes the investment backdrop is similar to that seen in the late ‘60s and early ‘70s when inflation and interest rates broke higher on high budget deficits and points out that the winners then were real assets, real estate, commodities, volatility, cash and EM while bonds, credit and equities all struggled.

Other BofA Equity strategists largely agree, suggesting the outlook for equities in 2022 is tepid at best. Sebastian Raedler sees downside for European equities on slower growth and a withdrawal of monetary stimulus. He prefers defensives to cyclicals and value over growth. Savita Subramanian sees flattish U.S. returns ahead, pointing to Fed tightening, inflation and rich valuations among other negatives, and is overweight energy, healthcare, and financials and constructive on capex. Winnie Wu remains neutral on China and Ajay Kapur is bullish on Asia (ex-China) and EM, but only until the liquidity peak in March 2022.

The global rates team agrees that the liquidity situation is about to turn, arguing that the peak in liquidity is likely just a quarter away. They expect central bank balance sheet size to decline as well, with the US Fed, the Eurosystem and the Bank of England all expected to shrink their balance sheets to $18T by the end of ’23 from above $20T in 1Q22. This would mean upward pressure on real rates and headwinds for risk assets. And while key central banks begin a tightening cycle in 2022, the BofA team believes that the Fed will have to hike more than expected, while rate hikes in the Euro Area and in the UK will be slower than currently priced into markets. Looking at the US, low rates have been a key driver for lofty asset values, therefore higher rates will put pressure on asset prices and activity, keeping the rate rise somewhat limited.

BofA economists and strategists predict robust GDP growth with weak China the outlier; inflation is predicted to be above consensus but like GDP should decelerate next 12 months; 3 Fed rate hikes forecast in '22 with 10-year Treasuries ending the year at 2%; US dollar and oil to remain well-bid (oil peaks around $117/barrel in Q2), gold to appreciate (see Table 1 below). 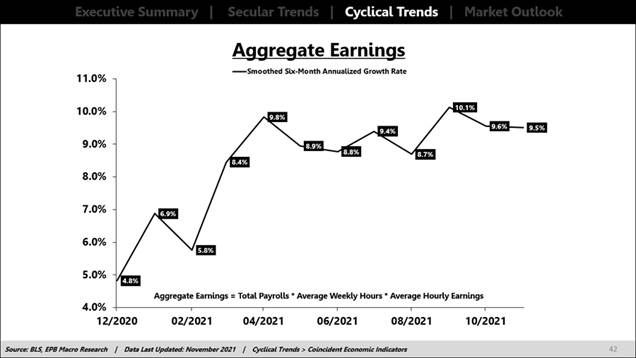 Real earnings up only 1.9% vs S&P 500 total return over 30% in the past year?  That dichotomy is greater, because corporate earnings are overstated due to accounting tricks and EPS are artificially boosted by share buybacks!  That makes stocks even more overvalued! 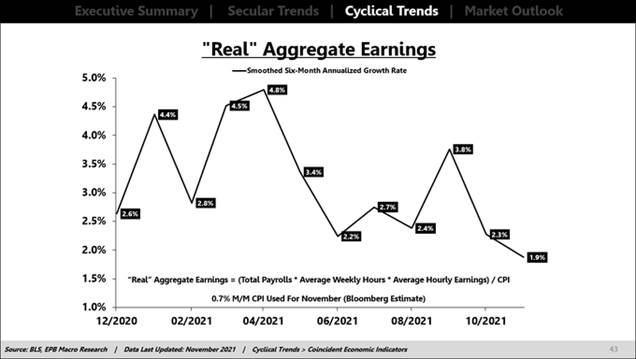 The persistent decline in real income growth is one of the more critical trends impacting the consumer today as inflation uncharacteristically rose in the early days of the recovery. 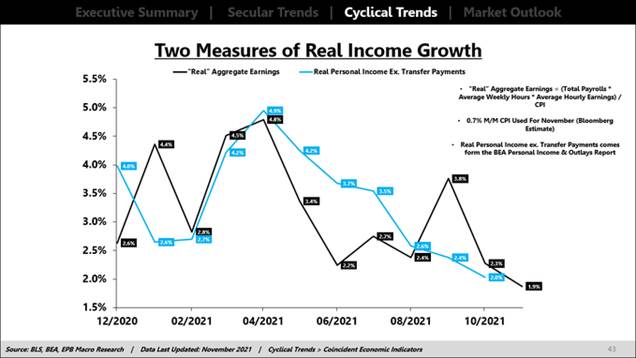 Compare the irony of declining real income (chart directly above) with the record amount of cash/deposits held by the public (Deposits and Currency Held chart from Jesse Felder’s earlier tweet).

How did the public accumulate so much cash if real income has declined?  Answer via a tweet from the St. Louis Fed:

“In an August survey of #LMI community stakeholders, 60% of respondents noted that federal stimulus checks, small-business support, unemployment benefits and rent relief were critically important for the people and communities they serve.” http://ow.ly/TCEA50H3lAM

Victor:  Russia’s Threats to Ukraine and NATO Could Lead to War

No one seems to be talking about a new threatening situation that could lead to war.  Russia has placed troops on its border with Ukraine in preparation for a potential Russian invasion of that country.  NATO has also been put on alert. It’s yet another important risk factor for investors to consider.

U.S. intelligence has found the Kremlin is planning a multi-front offensive in Ukraine as soon as early next year involving up to 175,000 troops, according to U.S. officials and an intelligence document obtained by the Washington Post.  Half the military units that would be involved in such an offensive had already arrived near Ukraine’s border over the past month, a U.S. official said Friday.

In a chilling speech last Tuesday, Putin said Russia would be “forced to act if its red lines" on Ukraine were crossed by NATO, saying Moscow would view the deployment of certain offensive missile capabilities on Ukrainian soil as a trigger.

"If some kind of strike systems appear on the territory of Ukraine, the flight time to Moscow will be 7-10 minutes, and five minutes in the case of a hyper-sonic weapon being deployed. Just imagine," said Putin.

"What are we to do in such a scenario? We will have to then create something similar in relation to those who threaten us in that way. And we can do that now,” he added.

U.S. President Biden and Putin will have a video call on December 7th to discuss this and related topics.  "Biden will underscore U.S. concerns with Russian military activities on the border with Ukraine and reaffirm the United States' support for the sovereignty and territorial integrity of Ukraine," White House spokesperson Jen Psaki said in a statement.

It’s been my experience that markets only react to the outbreak of war; not to threats of same.  However, when markets are so extended and overvalued, this Russia-Ukraine-NATO flare up will be watched closely.

Let’s wait for the outcome of that Biden-Putin video call before re-assessing this geopolitical hot spot and the impact it might have on financial and commodity markets.

“Price is what you pay. Value is what you get (or do not get). Whether we're talking about socks or stocks, I like buying quality merchandise when it is marked down.”

Warren Buffet in a 2008 letter to shareholders.