Oil Price Increase is a Headwind for Stocks:

WTI oil has risen 73% this year to >$80/bbl, a 7-year high, and BoA commodities team expects Brent to clear $100/bbl if we get a cold winter. Higher oil prices used to be a positive for earnings - every 10% rise in oil translated into a 5% increase to S&P 500 EPS. Higher oil not only helped oil producers, but also led to increased capex, benefitting Oil Services, Industrials, and their derivatives (jobs growth, etc.).  But it is different this time! Today's spike in energy prices represents a headwind, not a tailwind for equities. Here's why:

1) Shrinking size of energy beneficiaries: Last time oil was above $100/bbl was during 2011-14. Back then, oil beneficiaries (Energy, select Industrials, Chemicals) represented 20%+ of total S&P 500 earnings. Today, that number is just 6%.

2) U.S. E&Ps' capital discipline: The rig count remains >50% below the prior peak. At $80/bbl oil, our Oil Services analysts expect +22% in 2022 E&P capex, but 23% below 2018 levels. This translates to less revenue for energy capex beneficiaries and a lower earnings multiplier from higher oil. Energy earnings will also be driven mostly by higher prices, rather than price + volume.

3) Shale industry has matured: During the shale revolution, Oil & Gas capex represented ~6% of total private capex in the US, and Oil & Gas construction drove >1/3 of total private non-residential construction, with significant investments on pipelines, refineries, LNG terminals, etc. But that infrastructure has now been built.

The chart below shows the correlation between S&P 500 Quarter over Quarter (QoQ) return and WTI QoQ price change when higher oil prices are led by supply (narrowing crack spread) vs. demand (widening crack spread), March 1986 to September 2021.  When higher oil prices were due to supply shortages, the S&P declined 27%.  When increased demand drove oil prices higher, the S&P increased 29%.  Victor argues below that supply of oil and gas is being curtailed by the Biden administration’s Clean Energy policies. Do you think this year’s oil price increase was due to supply or demand?

Not all fourth quarters are bullish for stocks as per this table:

The negative SPX Q4's since 1978.  Normally associated with credit wobbles: 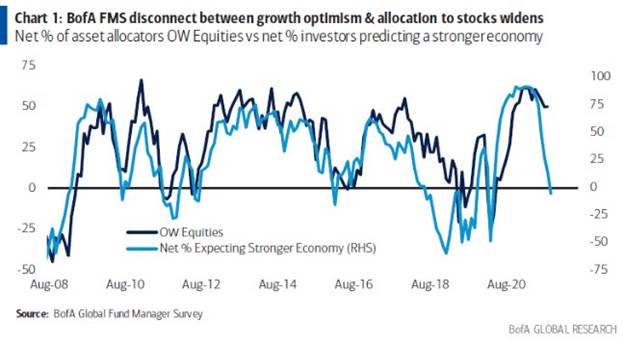 FT - Against the herd: trader Mark Spitznagel on contrarian investing

“It’s a terrible time for equity investing. It’s the worst time for this generation,” says Mark Spitznagel. “It’s very, very similar” to 2007, he says, although credit spreads and equity and bond valuations “are far more stretched today; NFTs [non-fungible tokens for digital assets] would have been laughed away in 2007.”

Much of the blame, he says, can be heaped squarely on central banks, which “are acting like it’s an emergency, despite [asset] valuations.” Spitznagel points to the rescue in the late 1980s of Continental Illinois National Bank, which he says was the start of the “too big to fail” policy. The idea that the Fed would provide a backstop against crises “let more and more irresponsibility happen. Investing is no longer about having to think about systemic risks in that way.”

Mark is careful not to say when a crash might happen but insists there must come a time “when you can’t take on more debt”. He adds: “It’s a very strong view I have. What has happened in the past decades is...  laying the groundwork for the next crash.”

The Volatility Index (VIX) closed at a new 18-month low as the S&P 500 closed at a new multi-year high on Thursday, October 21st. The 18-month low in the VIX Index represents the first occurrence since November 2017.  Of course, low volatility indicates extreme complacency, i.e., risk is a thing of the past? 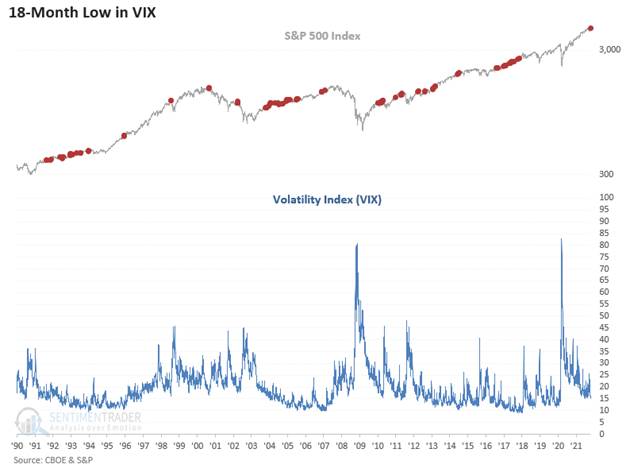 Paul Tudor Jones says inflation could be worse than feared:

“I think to me the No. 1 issue facing Main Street investors is inflation, and it’s pretty clear to me that inflation is not transitory,” Jones said Wednesday on CNBC’s “Squawk Box.” “It’s probably the single biggest threat to certainly financial markets and I think to society just in general.”

Jones said the trillions of dollars in fiscal and monetary stimulus is the impetus for inflation to run hotter for longer. To rescue the economy from the Covid-19 pandemic, the Federal Reserve has added more than $4 trillion to its balance sheet through its open-ended quantitative easing program, while the U.S. government has unleashed over $5 trillion in fiscal stimulus.

“Inflation can be much worse than what we fear. We have the demand side of the equation ... and that is $3.5 trillion greater than what it normally would have ... just sitting in liquid deposits,” Jones said. “They can go into stocks, or crypto, or real state, or be consumed, so that’s a huge amount of dry powder just sitting waiting to be utilized at some point, which is why inflation is not going away.”

“You don’t want to own fixed income,” Jones said. “You do not want to hold that whatsoever because what they’re saying, what they’re telling you by their actions, is that they’re going to be slow and late to fight inflation and somewhere down the road, somebody will have to come in ... and put the hammer down.”

If U.S. federal government spending/ $T+ budget deficits and Fed debt monetization continues, it’s safe to assume that there will be further (high) price increases.  That’s because “Inflation is always and everywhere a monetary phenomenon,” as per Milton Freedman and numerous Fed rounds of QE has caused stupendous increases in money (e.g., bank reserves, monetary base, M1, and M2).

Therefore, inflation will NOT be “transitory,” as long as the U.S. creates large budget deficits financed mostly by the Fed.  Let’s look at the evidence:

In other words, the huge Fed stimulated increase in the money supply (INFLATION) over the last few years caused retail prices to dramatically increase.  Contrast that to the period before 2018 where more normal money supply increases caused much lower price increases of 1.54% from 2011-2018 (using CPI headline non-seasonally adjusted calculations).

We see that U.S. government spending, funded by printed money (Fed QE “keystroke entries”), causes more money to circulate.  Therefore, food and gas prices go up as does everything else. In my opinion, these prices increases have little to do with supply chain shortages or the demand for goods and services.

The Fed has done a masterful propaganda job to deflect the truth: that inflation is actually a monetary phenomenon caused by the creation of more money (aka QE or “keystroke entries”). While supply chain shortages may contribute to rising prices of finished goods, it is not the root cause of inflation.

If the U.S. government continues to spend money, well beyond the collection of taxes, then the resulting price increases will NOT BE TRANSITORY!  This is the reality of correctly defining what you’re talking about (e.g., that inflation is a monetary phenomenon via the creation of new money).  Prices of everything are going up, just at different rates of increase.

Specifically, energy prices will continue to rise due to the U.S. government’s policy to curtail (so called) climate change. That will cause lower supplies of oil and gas, which will add to price increases as virtually everything is made and distributed using fossil fuels.

As we noted in last week’s Curmudgeon blog post, green energy (wind, hydro, and solar energy) only accounts for about 20% of electricity generation and a smaller percentage for the production and distribution of goods and services.

Lastly, it should be noted that the highest U.S. Treasury yields for this year were reached on October 21st: 5-year T note=1.23% vs 0.36 on 12/31/20; 10-year T note=2.13% vs 0.92% 12/31/20.  That might be due to Fed Chairman Powell’s speech the next day where he said that it is difficult to predict when the ongoing supply-chain issues will ease. As a result, Powell could see the case for inflation remaining high for a longer period of time. Please refer to: Equities Sell Off as Fed Chair Powell Sees High Inflation Lasting Into 2022.

Prices rises can’t be ignored and will sooner or later put pressure on politicians and the Fed to be more disciplined in their respective fiscal and monetary policies.

Frederick Bastiat was a French economist, writer, and a prominent member of the French Liberal School.